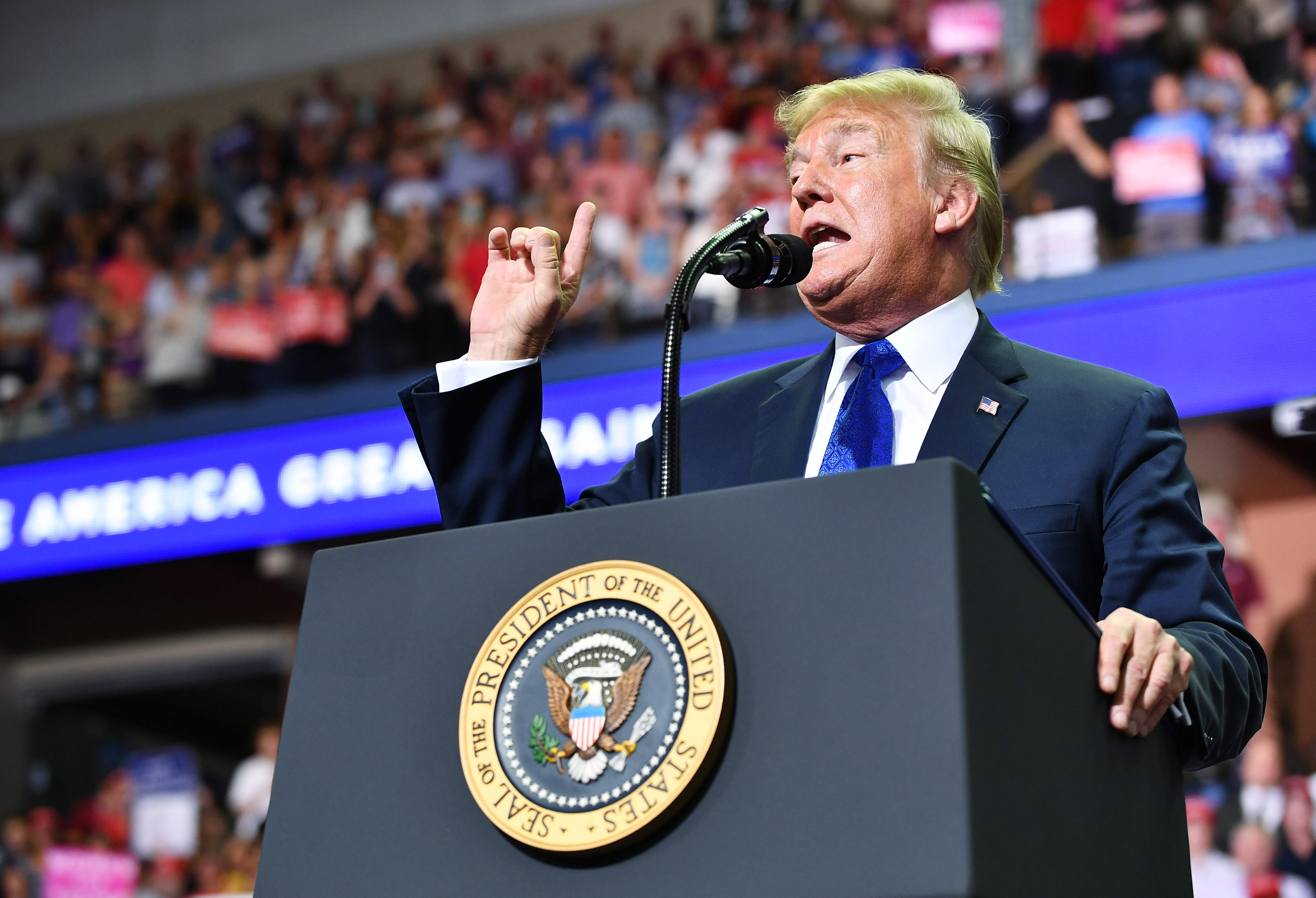 SOUTHAVEN, Miss. -- President Trump used his "Make America Great Again" rally Tuesday night in Mississippi to hit back against the scrutiny surrounding his Supreme Court nominee, Judge Brett Kavanaugh. The confirmation process to appoint Kavanaugh has been delayed over allegations that he engaged in sexual misconduct decades ago.

The audience laughed as Mr. Trump ran through a list of what he described as holes in Dr. Christine Blasey Ford's testimony before the Senate Judiciary Committee. She testified that Kavanaugh pinned her on a bed, tried to take off her clothes and covered her mouth in the early 1980s, when the two were teenagers. Kavanaugh has denied Ford's allegations.

Imitating Ford, Mr. Trump added, "But I had one beer -- that's the only thing I remember." At that point the crowd erupted in cheers and applause. Mr. Trump said "a man's life is shattered," referencing Kavanaugh, and "these are really evil people."

It marked the sharpest criticism by Mr. Trump of Ford since she came forward publicly with the allegation last month. He had previously called Ford a "very credible witness."

"Is it any wonder that she was terrified to come forward, and that other sexual assault survivors are as well?" Bromwich tweeted. "She is a remarkable profile in courage. He is a profile in cowardice."

You can watch Mr. Trump's rally in its entirety here.

Meanwhile, the FBI aims to complete its supplemental background check into the allegations of sexual misconduct made against Kavanaugh by the end of this week, and as Senate Majority Leader Mitch McConnell plans to hold a vote on the nominee in the coming days.

As Republicans fight headwinds ahead of the Nov. 6 midterm election, Mr. Trump rallied his supporters behind Sen. Cindy Hyde-Smith, who was appointed to fill the seat of Republican Thad Cochran, who retired in April. She faces three candidates -- Republican Chris McDaniel and Democrats Mike Espy and Tobey Bernard Bartee -- in next month's special election for the remainder of the two-year term.

Republican officials and the White House expect Hyde-Smith's race to go to a runoff under the state's jungle election rules that force a showdown between the top two finishers if no candidate wins at least 50 percent of the vote on Election Day. With Republicans defending majorities in the House and Senate next month, officials cast Mr. Trump's visit as an attempt to get ahead of a potentially perilous situation.

Officials said Mr. Trump is seeking to boost Hyde-Smith as close as possible to the 50 percent threshold and lend momentum for a possible runoff. Depending on how Republicans perform on Nov. 6, the eyes of the nation could fall on a Nov. 27 Mississippi runoff in what could become an expensive and high-profile race to determine control of the Senate.

"Your vote in this election will decide which party controls the United States Senate," Mr. Trump said.

Mr. Trump's support for Hyde-Smith is hardly without controversy - even at one of his own rallies. A vocal minority of the crowd on Tuesday backed McDaniel, a conservative state senator, and booed Hyde-Smith when Mr. Trump introduced her. They even launched into occasional chants of "We want Chris."

Mr. Trump also attacked Espy, a former congressman and the leading Democratic contender, saying a vote for him "is a vote for the Democrat agenda."

"This is also a referendum about me and the disgusting gridlock they'll put this country through," Mr. Trump added of Democrats.