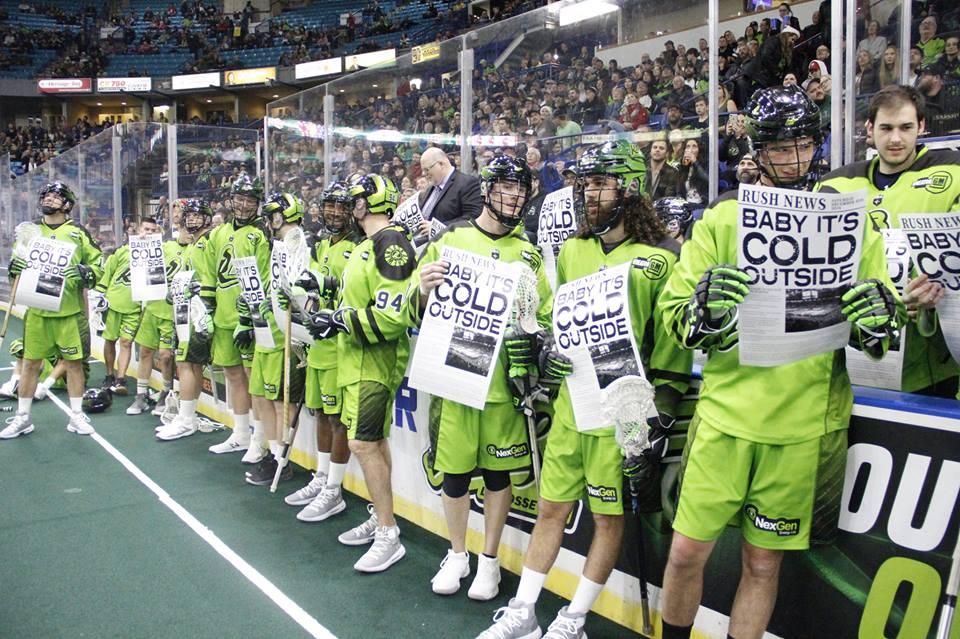 A Canadian lacrosse team received mixed reactions after embracing the controversial holiday song, "Baby It's Cold Outside." The Saskatchewan Rush played the song, whose lyrics seem inappropriate to some in the #MeToo era, during their game on Saturday night, CTV News reports.

The team encouraged spectators to sing along. The players also whipped out fake newspapers with the song's title as the headline – a tongue-in-cheek reference to the abundance of news reports being written about the song lately. (And also, perhaps, a timely comment on Saskatchewan's frigid winter temperatures.)

A Cleveland radio station first drew widespread attention to the song and its lyrics earlier this month. Star 102 Cleveland listeners raised concerns about "Baby, It's Cold Outside," with some saying the words in the duet send the wrong message about a man pressuring a woman to stay against her will. Critics have even called it "date-rapey." The radio station vowed to stop playing the song, and several other stations followed suit.

Canadian radio stations have also reevaluated the song's lyrics. CBC joined at least two other Canadian broadcasters and stopped playing the song on its airwaves. CBC spokeswoman Nicola Makoway said the broadcaster has "no plans to play it going forward."

However, the song still has many fans who disagree with the ban. After polling thousands of Bay Area radio listeners, San Francisco's KOIT radio station announced it was returning "Baby It's Cold Outside" to its daily playlist.

Apparently, members of the Saskatchewan Rush also felt the song was worthy of their support. The team not only played the song during their game, but they also posted several photos taken of the players during the song.

"Have you heard? Baby, it's cold outside," the team wrote on its Facebook page, sharing photos of the players holding up their parody newspapers. The post sparked a debate online and, like most conversations about the song, this one was polarizing.

"I like the tune, the lyrics make me a tad queasy, but you can blast it from the rooftops for all I care. But your reaction to this was tasteless," one commenter wrote. "As a society we are questioning previous held norms and standards regarding consent and male violence against women. You're simply mocking the people who stood up to say, hey, this song seems a little creepy, especially given the current political climate."

Other people commended the team's stance. "Love it!" one person wrote. "Too funny. Great game Rush!" another commented.

The great debate over "Baby It's Cold Outside" continues to weather the storm this holiday season – and even lacrosse teams are picking a side.