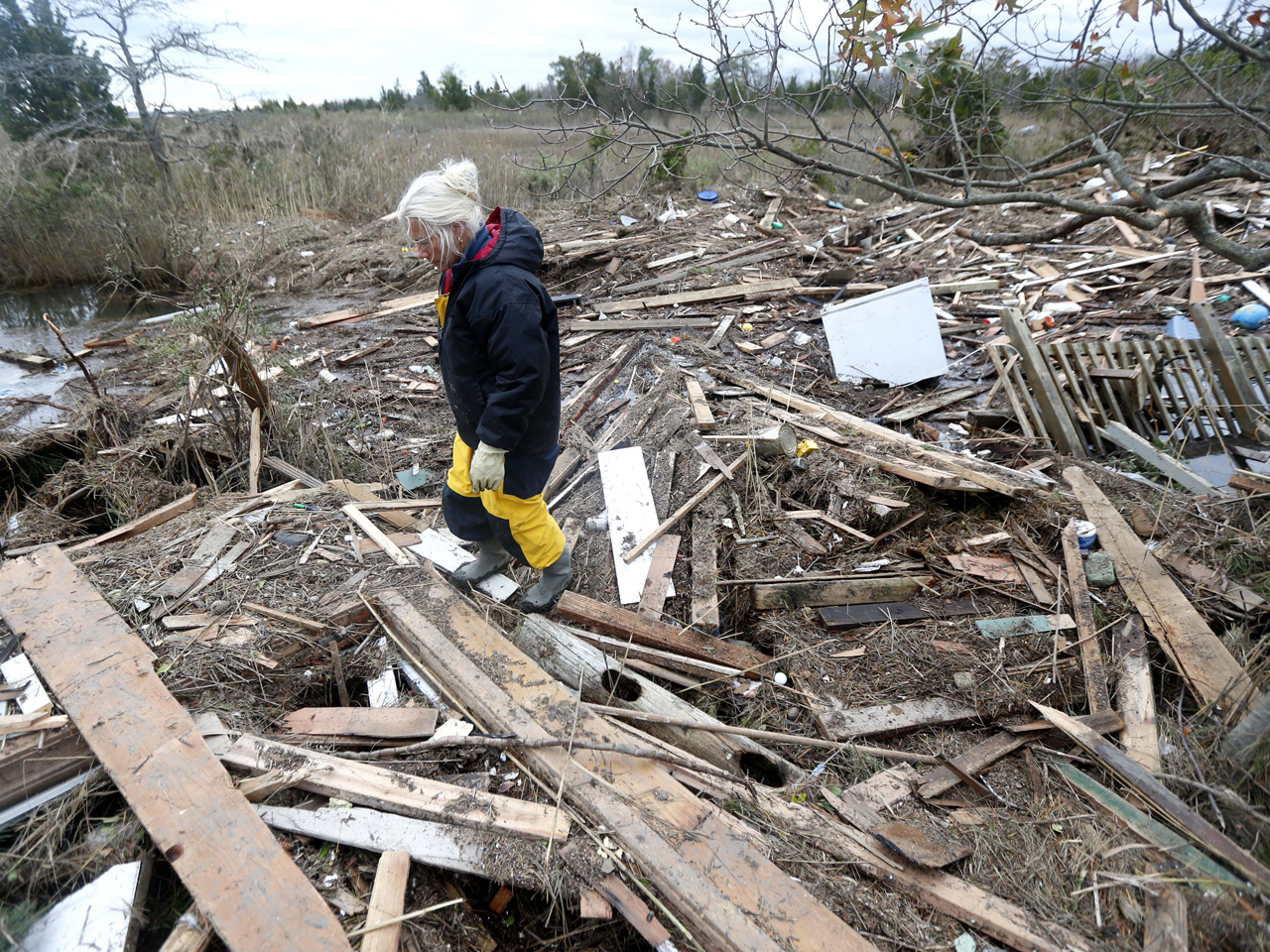 NEW YORKThe storm that was once Sandy is now a low-pressure system somewhere over northern Canada, dusting the region with snow and rain. On the way there, it left a trail of death and destruction from North Carolina to Maine, New York to West Virginia, that may take years to fully recover from.

The superstorm killed more than 70 in the Caribbean before killing at least another 91 in the U.S. and two more in Canada. It left tens of billions of dollars in damage, and crippled America's largest city, New York, which is only now crawling back to normalcy through long bus lines and gridlocked streets.

By Thursday, nearly all rescue efforts had ended along the ruined Jersey Shore and on Long Island, two places particularly hard hit by wind and storm surge. Recovery has begun.

As of 7 a.m. Thursday, White House Press Secretary Jay Carney said more than 36,000 disaster survivors in New York, New Jersey and Connecticut have applied for federal temporary housing assistance, and $3.4 million worth had been approved to support immediate needs. All three of those states have been given major disaster declarations, making them eligible for a wide swath of federal disaster aid.

For the next week the federal government will pay all of the costs to help get public transportation and power restored to parts of New York and New Jersey hit hardest by Sandy, the Federal Emergency Management Agency said Thursday.

FEMA Administrator Craig Fugate said President Obama has approved requests from New Jersey and New York for the government to cover the costs for emergency transportation, including helping repair subway tunnels and get buses running, and power grid repairs for 10 days. He did not give any estimates of how much that could cost.

The president's decision does not mean that the government will eventually reimburse the states for all the costs to repair damage from the massive storm.

In addition to the three previously-mentioned states, New Hampshire, Virginia, West Virginia, Rhode Island, Delaware, Pennsylvania, the District of Columbia, Maryland, and Massachusetts were given emergency disaster declarations, which can "trigger aid that protects property, public health, and safety and lessens or averts the threat of an incident becoming a catastrophic event," according to the Congressional Research Service.

W.Va. Gov. Earl Ray Tomblin said he plans to seek a federal disaster declaration for his state as worn-out residents and highway crews continued digging out from a blast of heavy, wet snow from Sandy. Tomblin said Thursday he'll ask President Barack Obama to approve assistance for residents and businesses in the hardest-hit areas.

The total economic damage from Superstorm Sandy could run as high as $50 billion, according to new estimates from the forecasting firm Eqecat. The new numbers are more than double the firm's previous estimate.

Eqecat said Thursday that its new estimate for economic losses is between $30 billion and $50 billion. The cost to insurance companies could run from $10 billion to $20 billion.

Widespread electric outages will likely push the costs higher than in a typical Category 1 hurricane, Eqecat said. The lack of subway service in New York City also led the firm to raise its damage estimate.

Before the storm hit, Eqecat estimated that the total economic losses could range as high as $20 billion and that insured losses could reach $10 billion.

The American Red Cross says superstorm Sandy has forced it to cancel more than 325 blood drives in 13 states and Washington, D.C., resulting in a shortfall of more than 11,000 blood donations.

It says more cancellations and blood donation losses are expected as residents and local officials struggle with the storm's aftermath. The Red Cross is urging eligible donors to give blood or platelets as soon as they are able.

In New York City and nearby Long Island, power was still out for hundreds of thousands, but the subways of the nation's largest city rumbled back to life in parts, as inspectors still survey the numerous tunnels left flooded by the storm.

New York City residents began to head back to work and carry on with life Thursday, even as schools remain closed and lower Manhattan was still without electricity for dozens of blocks.

Downtown Manhattan, which includes the financial district, Sept. 11 memorial and other tourist sites, was still mostly an urban landscape of shuttered bodegas and boarded-up restaurants. People roamed in search of food, power and a hot shower. Some dispirited and fearful New Yorkers decided to flee the city.

"It's dirty, and it's getting a little crazy down there," said Michael Tomeo, who boarded a bus to Philadelphia with his 4-year-old son. "It just feels like you wouldn't want to be out at night. Everything's pitch dark. I'm tired of it, big-time."

Gov. Andrew Cuomo says the meals and water will go to lower Manhattan, parts of Brooklyn and Queens and will include the Rockaways that were hit by flooding and house fires.

The food and water is being flown into John F. Kennedy International Airport beginning Thursday morning and will continue as needed.

Cuomo will visit a distribution site in Manhattan Thursday afternoon.

CBS News correspondent David Martin reports the military began airlifting 60 power company trucks - i.e. bucket trucks - from March AFB in California to Stewart AB in Newburgh, N.Y. on Thursday. Also, hundreds of power trucks are headed north from the D.C. area to New York and New Jersey according to people who have seen the trucks rolling.

Nearly 20,000 people remained stranded in their homes by floodwaters in Hoboken, N.J., across the river from the New York, and swaths of the New Jersey coastline lay in ruins, with countless homes, piers and boardwalks wrecked.

With the electricity out and gasoline supplies scarce, many stations across the metropolitan area closed, and the stations that were open drew long lines of cars that spilled out onto roads. Police were spotted throughout the area helping maintain order at gas stations, some of which had lines miles-long.

"Either they're out of gas or the lines are ridiculous," Katie Leggio said from her car, in line on Long Island. "I need gas. I think it's ridiculous that they're doing this to us when we're down, but what are you going to do? We're desperate, and we're helpless."

Police enforced carpooling at bridges into the city, peering through windows to make sure each car carried at least three people. TV helicopter footage showed lines for miles.

Across the region, people stricken by the storm pulled together, providing comfort to those left homeless and offering hot showers and electrical outlets for charging cell phones to those without power. That cooperative spirit extended to politicians, who at least made the appearance of putting their differences aside to deal with the destruction wrought by Sandy.