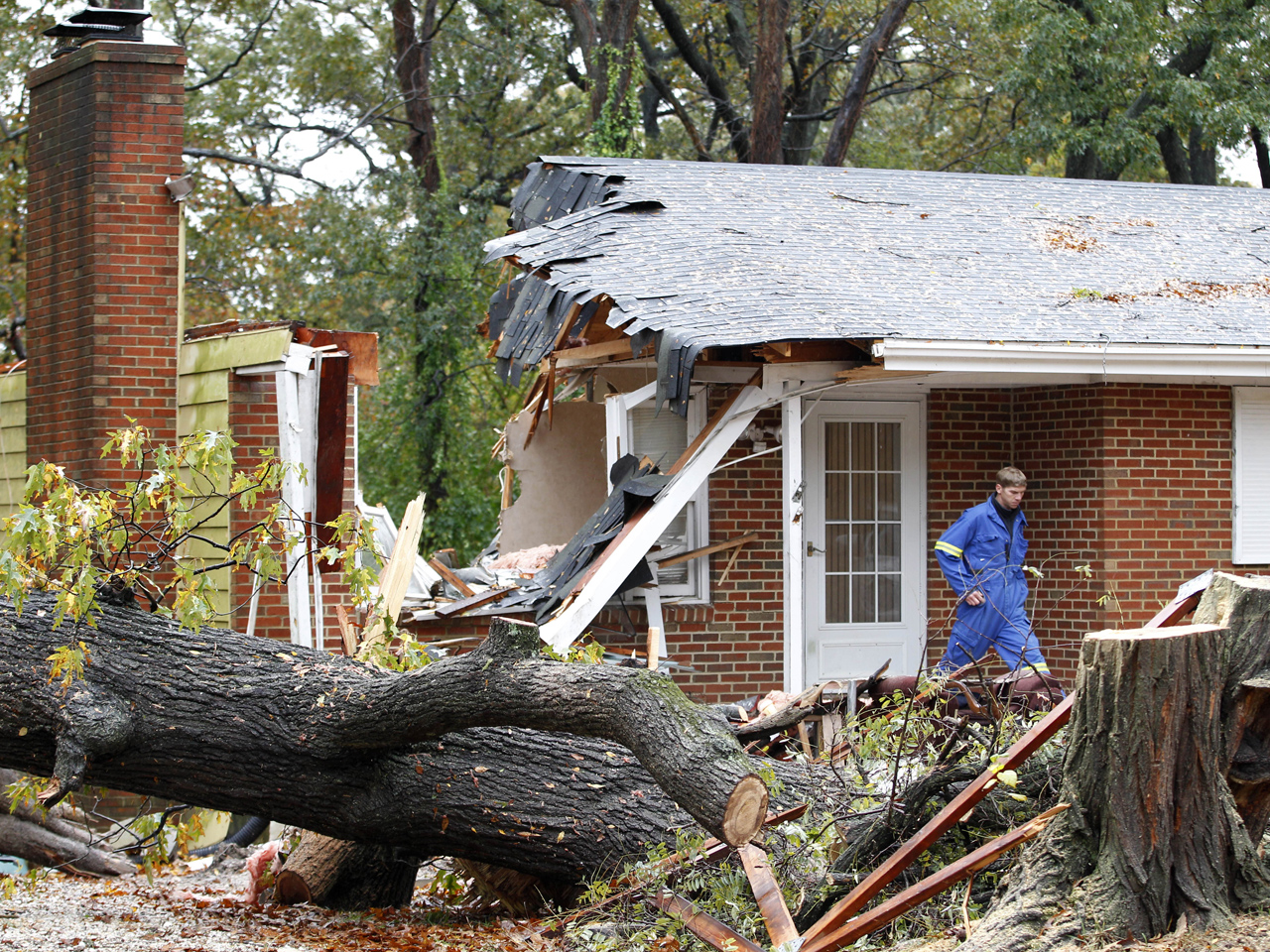 Death blew in on the superstorm's wild winds and sea water torrents, claiming 90-year-olds and children with capriciously toppling trees, taking tall-ship adventurers in mountainous Atlantic waves and average folks just trying to deal with a freakish snowstorm. It felled both heroes rushing into harm's way and, ironically, people simply following advice to play it safe at home.

At least 74 died as the shape-shifting hurricane and winter storm ravaged the eastern U.S., and searchers continued looking for victims Wednesday.

In New York City, a college student went out to take pictures in the borough of Queens and was electrocuted by a downed power line, while across town on Staten Island, an off-duty policeman drowned after moving his family to safety.

Lauren Abraham, who went by the nickname LolaDiva on YouTube, was a makeup artist who worked out of a studio in her parents' Queens home. The recent beauty school graduate was studying at City University of New York's Lehman College, according to her Facebook page. "In her time of reflection she learned to find the beauty in even the darkest situations," her online bio reads.

Then, according to police, Kasprzak, a six-year veteran of the force, told one of the women he was going to check the basement. When he didn't return, she called 911. Police came quickly with a scuba unit, but couldn't access the home because power lines had fallen into the water.

"He went to the basement. And the water just started washing in," his sister Marta told the Daily News. "He was pushed into a window. ... The water just kept coming in."

Also in Staten Island, a father and son, John Filipowicz Sr., 51, and John Filipowicz Jr., 20, were pronounced dead after being found buried under debris in the basement of their home, CBS New York station WCBS-TV reports.

Bunting draped a firehouse in Easton, Conn., honoring another first responder who rushed to help. Lt. Russell Neary was killed when an enormous tree crashed down on his fire truck as he and others tried to clear storm debris.

"We're a small volunteer department, and so everybody knew everybody," said Casey Meskers, the department vice president. Neary was the president. An insurance executive, he had volunteered for 13 years, and also helped with his children's sports teams.

"We've been on the soccer fields with each other with our kids," Meskers said Wednesday. "There's been a lot of tears shed, I'll tell you."

So many times, trees and heavy limbs that fell to the storm's powerful gusts left mourners along its path.

Donald Cannata Sr., 73, was at home in Pasadena, a leafy suburb between Baltimore and Annapolis, when the storm knocked a large tree into his house. The retired civil engineer lived alone with his cat and dog and had stepped into the kitchen just when the tree fell.

He loved photography and opera and was considerate, hardworking and selfless, said his son, Donald Jr., an opinion shared by neighbors. Cannata's son said his father's death "shook me so to the core," partly because they had talked about taking down the tree.

"We talked about it so many times. I said, 'Pop, the tree's getting pretty old,'" Cannata said.

An elderly man trimming a tree in Pennsylvania's Lancaster County was killed when a limb broke and fell on him, authorities said.

A limb fall also killed John Rose Sr. as he and his wife checked fences on his snow-covered 100-acre farm near Philippi, W.Va., on Tuesday. The storm had dumped about seven inches of snow in the region, where Rose was a Republican candidate for the House of Delegates. He had traveled to Charleston regularly to lobby lawmakers on farming and other issues, and he hoped to continue making the trip as a member.

Rose, 60, had previously run a power-washing business and worked as a coal miner, his son George Rose said.

"The whole county knew him," he said.

The storm's blizzard threat was still far off when, churning in the relatively warm Atlantic off Cape Hatteras, N.C., on Monday, Hurricane Sandy engulfed the replica tall ship HMS Bounty. The ship, which was featured in the films "Mutiny on the Bounty" and "Pirates of the Caribbean: Dead Man's Chest," took on water and eventually went down.

Coast Guard rescuers saved most of the 17 crew members, but a search continues for the ship's captain, Robin Wallbridge.

Swept overboard with him was Claudene Christian, 42, who said she was a direct descendant of the man who led the infamous 1789 mutiny on the real HMS Bounty. In the 1962 Bounty film, Marlon Brando starred as lead mutineer Fletcher Christian.

Searchers found Christian — a novice sailor who was wearing an orange survival suit — unresponsive in the water late Monday, about eight nautical miles from where the Bounty sank. She was flown by helicopter to a hospital on the mainland, where she was pronounced dead.

A marketing specialist, she had lived in Alaska, Oklahoma and California. She was a member of the University of Southern California cheering squad, the Song Girls, from 1989 to 1991, said coach Lori Nelson. "Claudene will always be remembered for her energetic and bubbly personality on and off the field," the team posted on its Facebook page.

Endless accidents that would be described as freak twists of fate spun off from the superstorm.

Eugene "Rusty" Brooks, 42, of Woodstock, N.H., died Tuesday morning when a hillside construction site in the state's White Mountains collapsed beneath him. Brooks, owner of Pemmi Contracting, had been preparing a cellar on a home site on Loon Mountain in the ski resort town of Lincoln, said Police Chief Ted Smith. The cellar hole had filled up with rain from Sandy, and Brooks had just thrown a hose in to drain it off when the ground gave way.

"The retaining wall just liquefied with him standing there," Smith said. "He washed down with all the boulders, mud and water into the street."

When police and rescue workers arrived, they found a bystander performing CPR on Brooks, who could not be revived.

"It just basically was a freak, bizarre accident," the chief said. "It could have given way prior to him being there or afterwards."

The massive storm's unrelenting stress was blamed as a contributor to death by some loved ones, and in other cases the paralyzing wind and water compounded medical problems.

An Atlantic City, N.J., woman had a heart attack while she was being evacuated on Monday, officials reported.

In Pennsylvania's Lehigh County, an 86-year-old woman was pronounced dead of hypothermia after being found unresponsive in her yard following exposure to the storm, and a 48-year-old woman died of carbon monoxide poisoning in her home, the coroner's office reported.

A 90-year-old woman also died of carbon monoxide poisoning from a generator in the Philadelphia area, one of two claimed by the storm at age 90. The other was a Mansfield, Conn., woman who neighbors said left her home after a small tree snapped and was killed by a larger one.

In New York City, Herminia St. John, a 75-year-old grandmother of 14 who suffered from congestive heart failure and diabetes, died after her oxygen machine lost power and a backup failed. Her grandson, Claudio St. John, rushed into the street and tried unsuccessfully to flag down an ambulance. Finally, he went around the corner to Bellevue Hospital, where his mother worked as a food supervisor for 30 years. But by the time someone came it was too late.

"I hugged her and she hugged and kissed me," Elsa St. John, 54, told the Daily News. "She asked me to turn her to the window and she was gone."