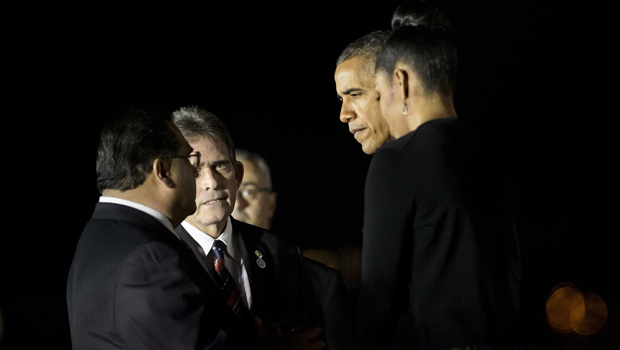 SAN BERNARDINO, Calif. -- At a table inside the Indian Springs High School library, Mandy Pifer sat alone, the last name of her boyfriend killed in the San Bernardino terrorist attack printed on a label in front of her.

Nearby, relatives of the 13 other people killed sat and waited anxiously. Some clutched memorial service programs with the photos and biographies of their deceased. One held the invitation to President Obama's 2009 inauguration his brother-in-law had gleefully obtained.

Pifer wrote out a sign with the words, "I got you."

When Mr. Obama and first lady Michelle Obama entered the room and made their way from one table to the next, spending about 10 minutes with each family Friday evening, the grief, sadness and frustration of the last 17 days were firmly on display.

Some shed tears. Others asked questions. Everyone got a hug.

"I was just really grateful for the time and it was a really intimate meeting. It wasn't, 'Sorry for your loss, we're out of here.' They were there for over two hours," Pifer, whose boyfriend Shannon Johnson was killed, told CBS News.

"It just felt like they were really present in their conversation with me," Pifer said. "They are sick and tired of doing these things, meeting our families."

For nearly three hours, the Obamas met with relatives of the nine men and five women killed Dec. 2 when a married couple opened fire on the husband's colleagues at a work holiday gathering in San Bernardino, about 60 miles east of Los Angeles. CBS Los Angeles reported memorial services were held Saturday for three of the victims.

The FBI is investigating the case as an act of terrorism. The couple, American-born Syed Rizwan Farook, 28, and his wife, Tashfeen Malik, 29, of Pakistan, pledged allegiance to a leader of ISIS on Facebook, moments before the shooting, authorities said. Both Farook and Malik were later killed in a gunfight with police.

Consoling the victims of gun violence has become a grim ritual throughout Mr. Obama's presidency.

Mr. Obama said meeting with the families in San Bernardino was a reminder "of what's good in this country."

"As difficult as this time is for them and for the entire community, they're also representative of the strength and the unity and the love that exists in this community and in this country," the president said late Friday after meeting privately with the family members.

"Even as we are vigilant about preventing terrorist attacks from happening, even as we insist that we can't accept the notion of mass shootings in public places and places of work and worship, we have to remind ourselves of the overwhelming good that exists out there," Mr. Obama said.

The meeting Friday came as some families are still burying their dead.

"My brother will never get his daughter back," said George Velasco, whose niece, Yvette Velasco, 27, was killed. "But at least we know they are taking it very seriously."

When Mr. Obama approached the Velasco's family table, he told the family he knew nothing he could say would ever truly comfort them, but that he was sincerely sorry for their loss, Velasco said. The family showed the president a picture of Yvette Velasco on a cellphone and her father told Mr. Obama how proud he had been of her work as an inspector with the county Department of Environmental Health.

The president told them he and his wife were parents too and that, "they cannot imagine a loss like ours."

"I couldn't believe that he was spending that much time with us," Velasco said. "It was heartfelt. I could feel it. It was something he really felt and believed."

The mood in the room was somber, though each family seemed to perk up when Mr. Obama arrived at their table. When Mr. Obama reached the family of Isaac Amanios, he asked the 60-year-old health inspector's wife about how long they had been married and about his three children about their lives.

He told Amanios' children that they were his father's legacy.

The family showed the president the invitation Amanios had received to attend the 2009 inauguration. Amanios had raised money for Mr. Obama's 2008 campaign, even though the immigrant from Eritrea was still not eligible to vote, his brother-in-law, Robel Tekleab, said.

"I know it helped tonight," Tekleab said. "I can't speak about the future. But it certainly did a great thing tonight."

Pifer sat at one of the last tables the Obamas visited. While she waited, she wrote out a sign with Johnson's final words. Johnson's colleague, Denise Peraza, who survived the attack, said Johnson huddled with her under a table that morning as bullets flew across the room.

He held her close and told her, "I got you."

Peraza credits Johnson with her survival, and since then the phrase "I got you" has spread across social media. Pifer and Peraza are in the final stages of planning a foundation in Johnson's memory.

Pifer told the president about Johnson and how much he loved life. They promised to provide whatever support they could and Michelle Obama even said she would rap or perform at a fundraising concert for the foundation, Pifer said.

"I feel like they're on my side," she said. "They're on our side. And that he's going to keep working to make this better even after he's left office. It's personal for them."

"It's helping the grieving process," Pifer said. "It was very comforting."