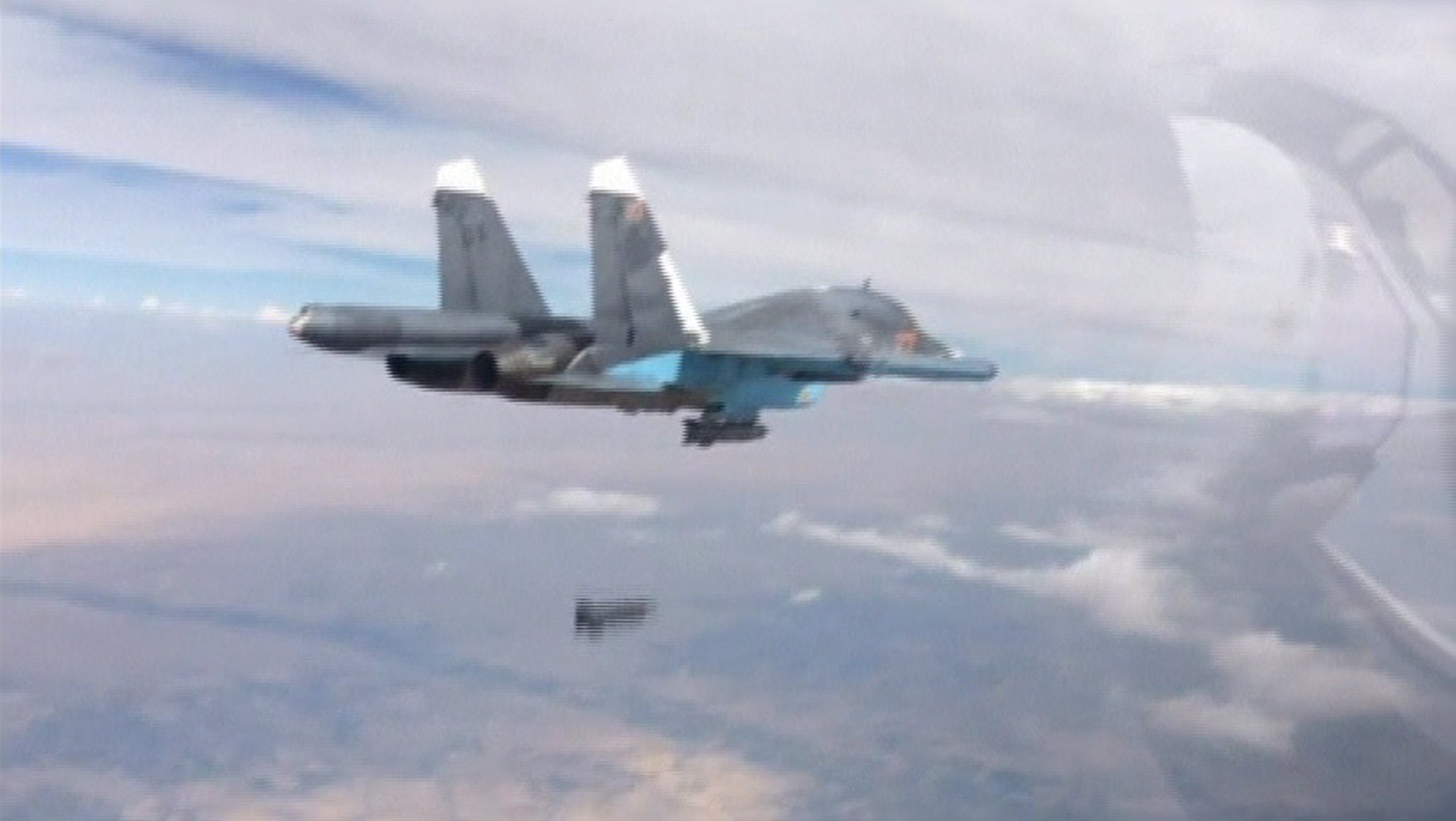 A U.S. official told CBS News that radar tracking confirmed the Russian plane was in Turkish airspace, saying, "it was close," but it did cross the border.

Russia flatly denied that its warplane had crossed into Turkish airspace.

"We are looking into the circumstances of the crash of the Russian jet. The Ministry of Defense would like to stress that the plane was over the Syrian territory throughout the flight," the Russian ministry said in a statement.

The Turkish Defense Ministry was quoted by Reuters as saying the Russian jet was warned 10 times within five minutes to leave Turkish airspace before it was shot down. Turkish officials said the Su-24 was warned as it flew over Yaylidag, in Turkey's southern Hatay province, and the Ministry of Defense released radar images purportedly showing the Ru-24's flightpath over the southern tip of Turkey's Hatay province, which juts down into northern Syria.

Turkish President Recep Tayyip Erdogan said the nation was simply following its rules of engagement when it shot down the plane. He said Turkey harbors no "enmity" toward Russia or any other nation.

In Washington, President Obama said that while information about the incident was still emerging, Turkey had a "right to defend its territory and its airspace."

The Russian jet crashed down into Syrian territory. Amateur videos showed it plummeting to the earth with flames trailing behind it before it disappeared behind a hill. Two parachutes were seen floating down to the ground, also; evidence that the two pilots from the jet had ejected.

Russian news agencies reported that general staff spokesman Lt. Gen. Sergei Rudskoi said that that one of the pilots was killed by groundfire as he parachuted from his plane.

CBS News correspondent Charlie D'Agata says unverified video posted by Syrian rebels from the area showed what appeared to be a lifeless Russian crewman. The rebels in the video said he was dead, though it was unclear, if true, whether he died in the initial strike or whether he was killed in crossfire on the ground.

A Turkmen rebel commander later told Turkey's Dogan news agency that both pilots were shot and killed by his forces after parachuting to the ground. That claim could not be independently verified, and there were also reports in Turkish media suggesting at least one pilot could still be alive.

Russian President Vladimir Putin warned that the incident would have "significant consequences" for his country's relations with Turkey, and insisting that the Su-24 jet remained just less than a mile inside Syrian airspace on a mission against the Islamic State of Iraq and Syria (ISIS).

He said Moscow considered the shoot-down a "stab in the back by the terrorists' accomplices," and accused Turkey of helping ISIS.

"Instead of discussing the incident with Moscow, they turned to their NATO partners as if it was us who downed their jet," Putin said. "It's as if Turkey wants to put NATO at the service of ISIS."

"We will never tolerate such atrocities as happened today and we hope that the international community will find the strength to join forces and fight this evil," Putin said on Russian television.

Russian Foreign Minister Sergey Lavrov a planned visit to the Turkish capital he had been scheduled to make on Wednesday, and the ministry released a statement warning Russian nationals against traveling to Turkey.

Speaking in Moscow, the deputy head of the Russian Duma, the lower house of Parliament, said the strike against the Russian jet was carried out with U.S. support.

Col. Steve Warren, a spokesman for the U.S.-led miltiary coalition in Iraq and Syrai, confirmed that American military were "able to hear everything that was going on" as the Russian and Turkish pilots communicated, and said the Turks had warned the Su-24 pilots 10 times to change course.

D'Agata said Russian helicopters were seen flying over the area of the crash in an apparent search and rescue operation for their lost crewmen.

The Su-24 crashed down in part of northwest Syria where Turkish-backed Free Syrian Army and Turkmen rebels hold territory.

Turkey said the plane was shot down by Turkish F-16 fighter jets, but the Russians said ground-based artillery hit the Su-24. It was not immediately possible to reconcile the varying reports.

The shootdown of a Russian jet highlights the tense situation in the skies over Syria, where a growing list of nations -- with often divergent interests -- are carrying out airstrikes. It was the first time in five decades that a NATO member had shot down a Russian plane.

Turkey and NATO warned in early October -- after Russia said one of its warplanes had crossed into Turkish airspace near the Syrian border by "mistake," in addition to a couple other infringments by Russian planes -- that the infractions were "very serious," even dangerous.

A senior U.S. defense official told CBS News at that time that the Russian violation did not appear to be accidental, as claimed by Moscow.

The U.S. moved half a dozen more F-15C fighter jets from Britain to a base in southern Turkey after the early October incidents, in an effort to shore-up a key NATO ally. NATO's governing body, the North Atlantic Council, was to hold an "extraordinary" meeting later Tuesday, at Turkey's request, to discuss the incident.

The Turkish government has been a staunch opponent of Syrian President Bashar Assad's regime since the uprising against his family's decades-long rule first began in 2011. Russia, on the other hand, remains one of Assad's most valuable allies.

Russia dramatically upped its stake in the Syrian war at the end of Sepetember, unleashing a wave of airstrikes against rebel groups that were putting significant pressure on Assad's beleagured military. Moscow initially claimed it was focusing its attacks on ISIS militants, but it was clear the real focus was other groups pushing toward Assad's stronghold in Damascus.

Russian planes have targeted ISIS fighters and infrastructure more frequently in recent weeks, and the group's apparent role in smuggling a bomb onto a Russian passenger plane that was blown up over Egypt on Oct. 31 has focused Moscow's anger on the Sunni Islamic extremist group.

Nevertheless, the area where the Russian jet was downed, in the Turkmen Mountains region of the costal Lattakia Province, where Russia's military force in Syria is based, has seen fierce fighting in recent days.

Assad's forces hard begun making advances in the aea -- under cover of Russian airstrikes -- against rebel groups including the FSA and al Qaeda affiliate the al-Nusra Front.

U.S.-led coalition strikes have focused almost exclusively on ISIS, and have been given a recent boost by a more active French role in the campaign following the Paris attacks blamed on the group that killed 130 people.

CBS News senior national security correspondent David Martin reported Monday that a couple of the most recent airstrikes carried out by the U.S. destroyed almost 500 tanker trucks that were being used by ISIS to smuggle oil and sell it on the black market.

By one estimate, Martin said U.S. strikes had destroyed about half the trucks ISIS uses to rake in an estimated $1 million each day in revenue.

Education was a lifeline for this Syrian immigrant. Now he's helping others.
More
Tucker Reals