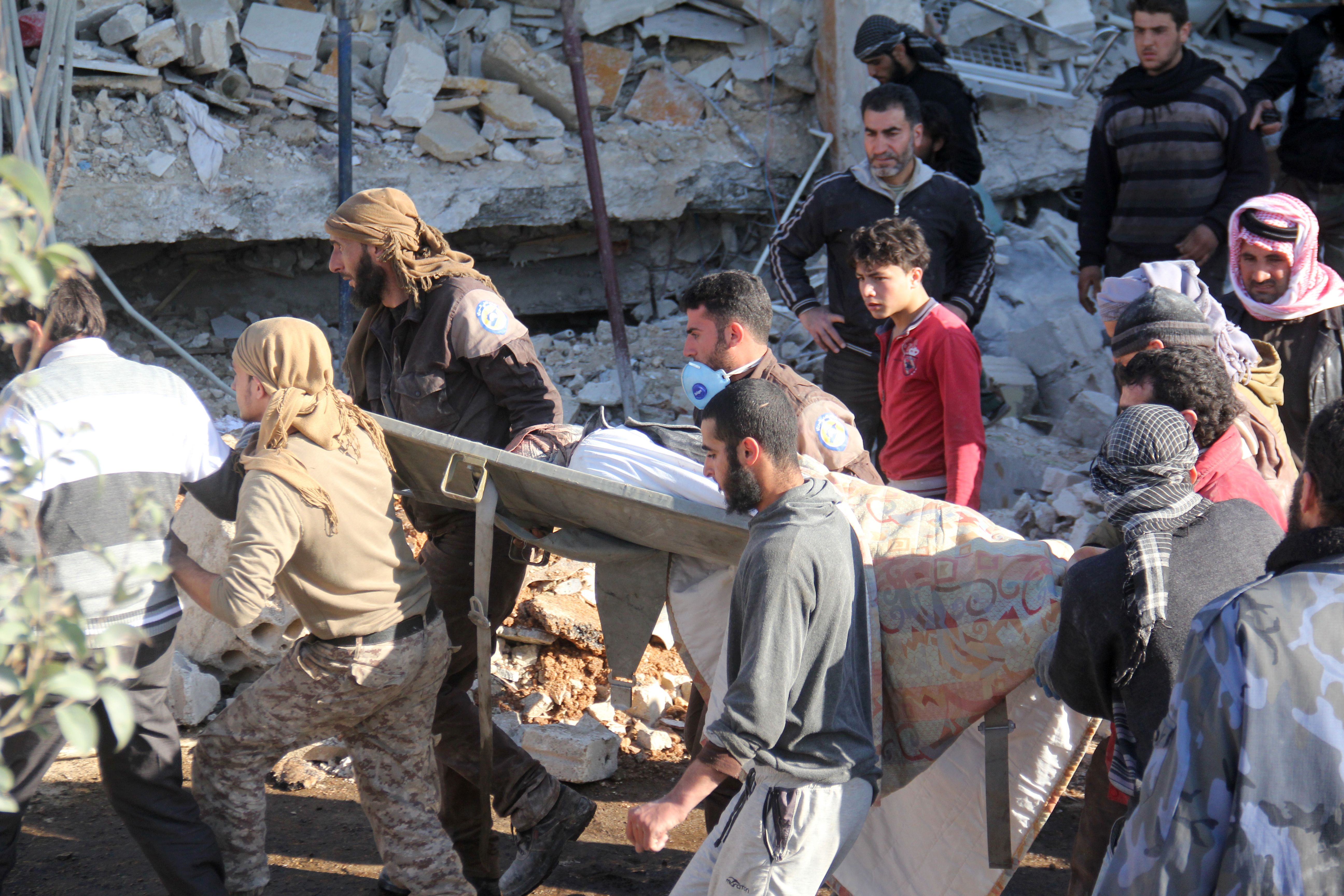 BEIRUT -- Russia on Tuesday rebuffed claims that its warplanes struck a hospital supported by Doctors Without Borders in northern Syria in airstrikes the previous day that killed at least nine as Syrian government forces and a predominantly Kurdish coalition made gains against rivals in the country's north.

In Moscow, President Vladimir Putin's spokesman Dmitry Peskov told reporters the hospital report was another case in which those who make accusations against Russia cannot back them up.

The Britain-based Syrian Observatory for Human Rights had said Russian warplanes targeted the hospital in Idlib province on Monday, destroying it and killing nine people.

The makeshift clinic was supported by the international aid group, also known by its French acronym MSF. France said that such attacks "could constitute war crimes."

The U.S.-led coalition fighting ISIS in Iraq and Syria has also flatly denied responsibility for the strikes -- which were only the most recent examples of foreign warplanes hitting civilians with missiles in the war-torn country.

In a statement sent on his official Twitter account, spokesman Col. Steve Warren said, "the coalition did not fly anywhere near Aleppo" on Monday.

Peskov, in a conference call with journalists, said those who make such accusations should instead do as Moscow does and rely on the "primary source" -- official announcements from the Syrian government. When pressed, he told journalists the Syrian government had made a string of announcements on who could have been behind the bombing. He also noted that Syria's ambassador to Russia said the hospital was destroyed by the Americans.

"We categorically reject such claims, even more so because each time those who make such claims prove unable somehow to corroborate their unsubstantiated accusations," Peskov said.

MSF said the hospital in the town of Maaret al-Numan in Idlib province was hit four times in attacks that were minutes apart. The attack left the local population of around 40,000 without access to medical services, said MSF mission chief Massimiliano Rebaudengo.

The Observatory said and other opposition activists said another hospital in Maaret al-Numan was also hit Monday, most likely by a Syrian government airstrike.

And in the neighboring Aleppo province, a missile struck a children's hospital in the town of Azaz, killing five people, including three children and a pregnant woman, according to the Observatory. A third air raid hit a school in a nearby village, killing seven and wounding others.

Opposition official Abdulrahman Al-Hassan said the women's hospital in Azaz was hit by two surface-to-surface missiles, blaming the attack on Russia because "photos of the missiles have Russian language (and) because we haven't seen this kind (of missile) before the Russian intervention."

The airstrikes came just days after Russia and other world powers agreed to bring about a pause in fighting that would allow for the delivery of humanitarian aid and the revival of Syrian peace talks. The projected truce agreed on Friday in Munich was to begin in a week, but there has been no sign it would happen.

Meanwhile, Syrian government troops and a predominantly Kurdish coalition of fighters advanced and captured more areas in the north from rival groups on Tuesday, while pro-government forces routed extremists from a main power station in the area.

The north has been the focus of the most intense clashes in recent weeks in Syria.

Syria's state news agency SANA and the Observatory said government forces took the villages of Ahras and Misqan in the northern province of Aleppo. Separately, members of the Syria Democratic Forces, a coalition of Arab and Kurdish groups, captured the major town of Tel Rifaat, one of the largest militant strongholds in Aleppo.After Tel Rifaat, SDF fighters also took the nearby village of Kfar Naseh, south of the town.

The SDF fighters are a separate entity in Syria's five-year civil war and have mostly battled ISIS. Parts of the coalition oppose President Bashar Assad but have also fought against other rebels and the Western-backed opposition.

Intense clashes broke out Tuesday near the village of Kaljibrin as SDF fighters tried to reach it, according to the Observatory and Aleppo-based activist Bahaa al-Halaby. If SDF captures Kaljibrin, it would squeeze rebels in their stronghold of Mareh and the adjacent village of Sheikh Issa, which is also under attack by ISIS.

Also Tuesday, government forces and allied gunmen captured a power station in eastern Aleppo from ISIS that the extremists had used as a jailhouse. The Observatory said the station and nearby villages were captured under the cover of aerial attacks by Syrian and Russian warplanes and helicopter gunships.

Meanwhile, in the city of Aleppo, insurgents repelled an attack by SDF fighters on the neighborhoods of Hullok and Bustan al-Basha, according to al-Halaby and the Aleppo Media Center.

"They were trying to besiege (rebel-held parts) of the city of Aleppo but were forced out," al-Halaby said via Skype.

In Damascus, the U.N. special envoy to Syria, Staffan de Mistura, met on Tuesday with Foreign Minister Walid al-Moallem. In a brief statement to reporters after the meeting, de Mistura said the talks focused on "the issue of humanitarian and hindered access to all besieged areas, not only by the government but also by the opposition and ISIL," another acronym that refers to ISIS.

The UN envoy arrived in the Syrian capital Monday for discussions on aid deliveries and how to resume peace talks in Geneva.

Indirect peace talks between representatives of the Syrian government and the opposition collapsed earlier this month in Geneva after just two days, largely because of the government offensive in Aleppo.