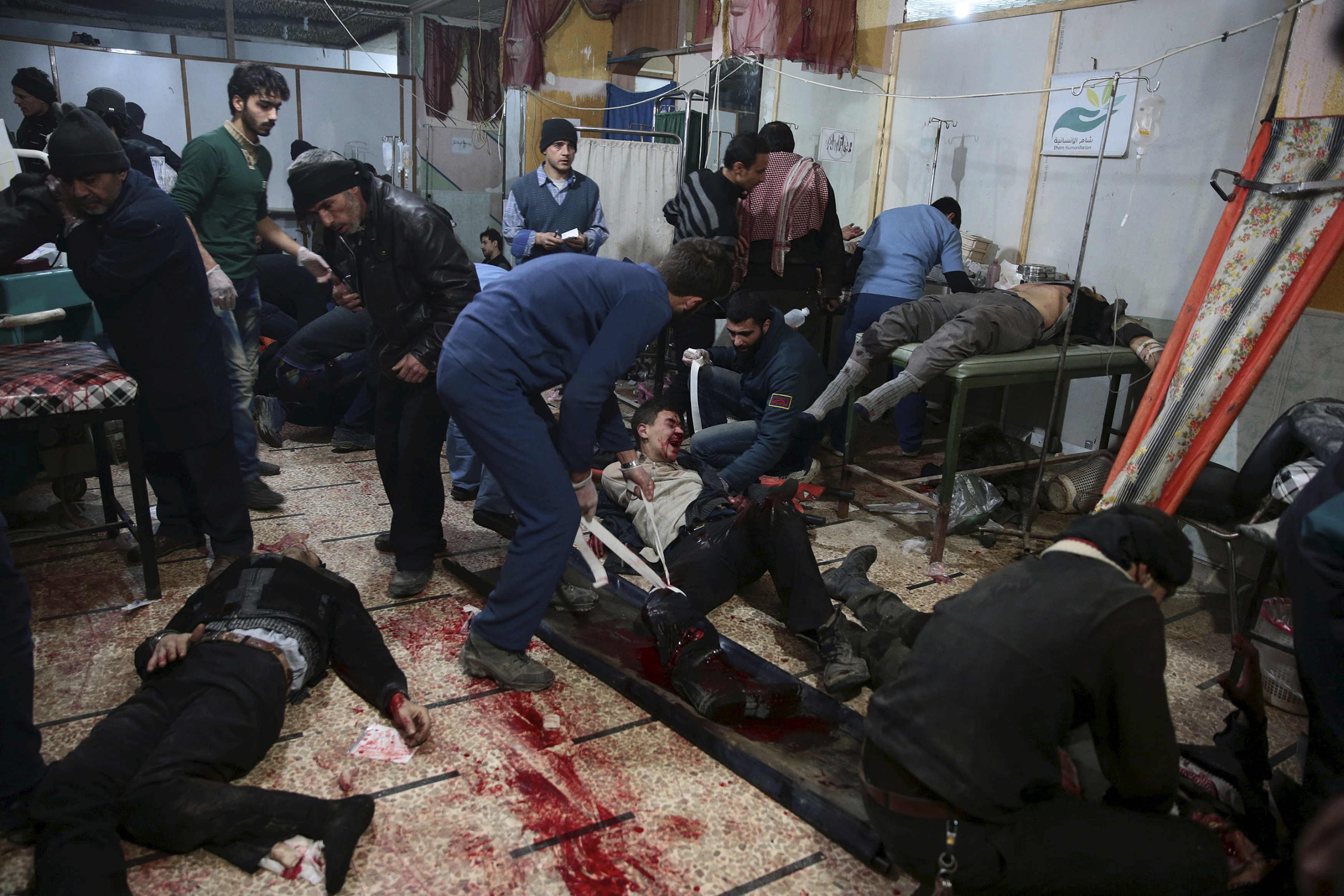 BEIRUT -- The three missiles fired on a public market in the northern Syrian town of Ariha took the morning shoppers by surprise. In a few moments, the main street, packed with people buying and selling fruit and vegetables, turned into a scene of carnage with burning cars and the wounded screaming in terror.

At least 34 civilians were killed in the Nov. 29 attack - one in a growing number of suspected Russian attacks that Syrian opposition and rights activists say have killed civilians and caused massive destruction to residential areas across the country since Moscow formally joined the conflict nearly three months ago.

Russian officials have repeatedly rejected the accusations while residents and most opposition activists inside Syria acknowledge they have no way of categorically distinguishing whether planes that carry out a specific attack are operated by Russians or Syrians.

But human rights group say the pattern of attacks suggests Russia is flouting international humanitarian law and that it may even amount to war crimes.

Russian Defense Ministry spokesman Maj.-Gen. Igor Konashenkov rejected Amnesty's claims as "clichés and fakes," accusing the group of relying on activists' claims that could not be checked or proven.

He particularly criticized the group's claim that the Russian strikes targeted areas where there were no militants, saying Amnesty had no way of knowing that.

"Jihadis in Syria operate in highly mobile units, using Toyota pickup trucks with high-caliber weapons mounted on them," he said. "Each of those vehicles is considered a tactical unit and represents a legitimate military target."

Amnesty's report focuses on six attacks in Homs, Idlib and Aleppo provinces between September and November which it says killed at least 200 civilians.

"Some Russian air strikes appear to have directly attacked civilians or civilian objects by striking residential areas with no evident military target and even medical facilities, resulting in deaths and injuries to civilians," said Philip Luther, director of Amnesty's Middle East and North Africa program.

"Such attacks may amount to war crimes," Luther added.

Cluster munitions, which can be delivered from the ground by artillery and rockets or dropped from aircraft, are by nature indiscriminate and often leave unexploded bomblets on the ground. These can maim and kill civilians long after the hostilities or a conflict ends. Russia and Syria among several nations -- including the United States - are not signatories to the Convention on Cluster Munitions, which bans the bombs.

The Moscow spokesman singled out Amnesty, criticizing it for taking a "biased" approach toward Russia and adding that the U.S.-led coalition, Syria and Turkey also have conducted airstrikes in Syria where the level of coordination has been poor - suggesting those strikes have also caused civilian casualties.

"Why does Amnesty International put the emphasis on the Russian action? Such accusations are groundless," Konashenkov said.

The Syrian Observatory for Human Rights, which documents casualties in the Syrian civil war through activists on the ground, says Russian strikes in Syria have killed at least 710 civilians since Sept. 30, compared with nearly 600 Islamic State militants and 824 fighters of other opposition groups.

Russia's entry into the conflict has further muddled the military landscape in the Syrian War, where front lines are always shifting and the list of participants keeps growing.

Russia says its airstrikes are aimed at the Islamic State group and other "terrorists" - a term that President Bashar Assad's government uses for all armed and opposition groups battling his forces - but Western officials and Syrian rebels say most of the strikes have focused on central and northern Syria, where IS does not have a strong presence.

Last month's attack on the market in Ariha, documented by Amnesty, is an example.

The Amnesty report cited town residents as saying there were no militants in the area. Rebels with the Army of Conquest - an umbrella group that includes hard-line factions and militants from the Nusra Front, al-Qaida's branch in Syria - had conquered Ariha from Syrian government forces in the spring.

However, the coalition's fighters were stationed outside the town, according to the residents, who claimed that two warplanes had circulated overhead before they unleashed the three missiles.

The residents say they distinguish Russian planes because they fly at higher altitudes from Syrian planes or helicopters, which tend to drop indiscriminate barrel bombs at lower altitudes. Some also say that Russian-operated planes tend to fly in twos.

The missiles turned the Ariha market, in the town center, into chaos. Amateur videos of the aftermath showed bodies and pools of blood scattered amid overturned crates of fruit and vegetables. Bystanders and first responders carried the wounded to a clinic, which was quickly overwhelmed, forcing medics to treat the victims on the floor.

Amer, a resident of Idlib who told The Associated Press that he witnessed the attack said he had never seen such carnage.

"It seems for the Russians and Syrians everything is allowed." He did not give his full name, fearing for his own safety.

Asked about allegations that Russia is using cluster bombs, Russian President Vladimir Putin's spokesman Dmitry Peskov insisted this week that the Russian military in Syria operates in line with international law and its "bans on using one or another type of weapons."

Accusations of deadly Russian airstrikes have become common in Syria.

On Sunday, airstrikes believed to be Russian on the northwestern city of Idlib killed at least 32 people, among them many civilians, according to opposition activists. On December 18, between 14 and 17 people, including women and children, died in a suspected Russian raid on the rebel-held town of Jisr al-Shughour, in Idlib province, not far from Ariha. A coalition of Syrian opposition groups said the planes bombed residential buildings.

On October 15, at least 46 civilians died in a suspected Russian raid on al-Gantu, in the central Homs province, when a destructive "vacuum bomb" collapsed a building and crushed the shelter in the basement.

A local first responder told Amnesty that the nearest rebel military base was 300 meters (yards) away from the site where the bomb hit.