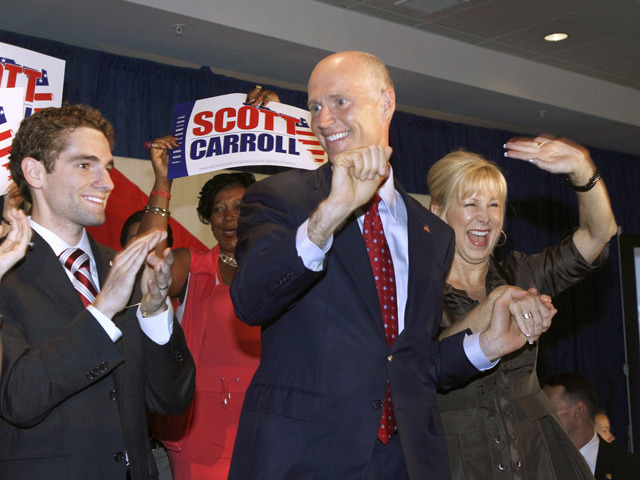 After a long, bitter, and exceedingly close race, Republican Rick Scott took the Florida governor contest on Wednesday morning, beating out Democratic rival Alex Sink by a margin of less than 70,000 votes of the 5.3 million cast.

"Today is the end of politics as usual in Tallahassee," Scott told a crowd of several hundred supporters in a victory speech on Wednesday, according to the Palm Beach Post.

"Starting today, I work for every Floridian," Scott said, adding "Florida is open for business."

Sink, who conceded this morning, attributed the loss to a strong anti-Democratic sentiment among voters, and a significant financial disadvantage against her opponent, who spent more than $78 million in personal wealth on the campaign, according to Bloomberg news.

Scott is the former CEO of the for-profit hospital chain Columbia/HCA, which was raided by the FBI in 1997 for widespread Medicare fraud. Scott resigned four months after the FBI's investigation became public, but some have wondered about his potential involvement in the affair. According to the Miami Herald, Scott said he was never indicted for or questioned about the case.

The hospital chain, Columbia/HCA, pleaded guilty to at least 14 felony charges, and was ultimately fined $1.7 billion for the fraud, according to the Miami Herald. Among those charges were three counts of conspiracy to defraud the United States.

According to CBS News' election night results, Scott won by about one point, with 49 percent of the votes to Sink's 48 percent.