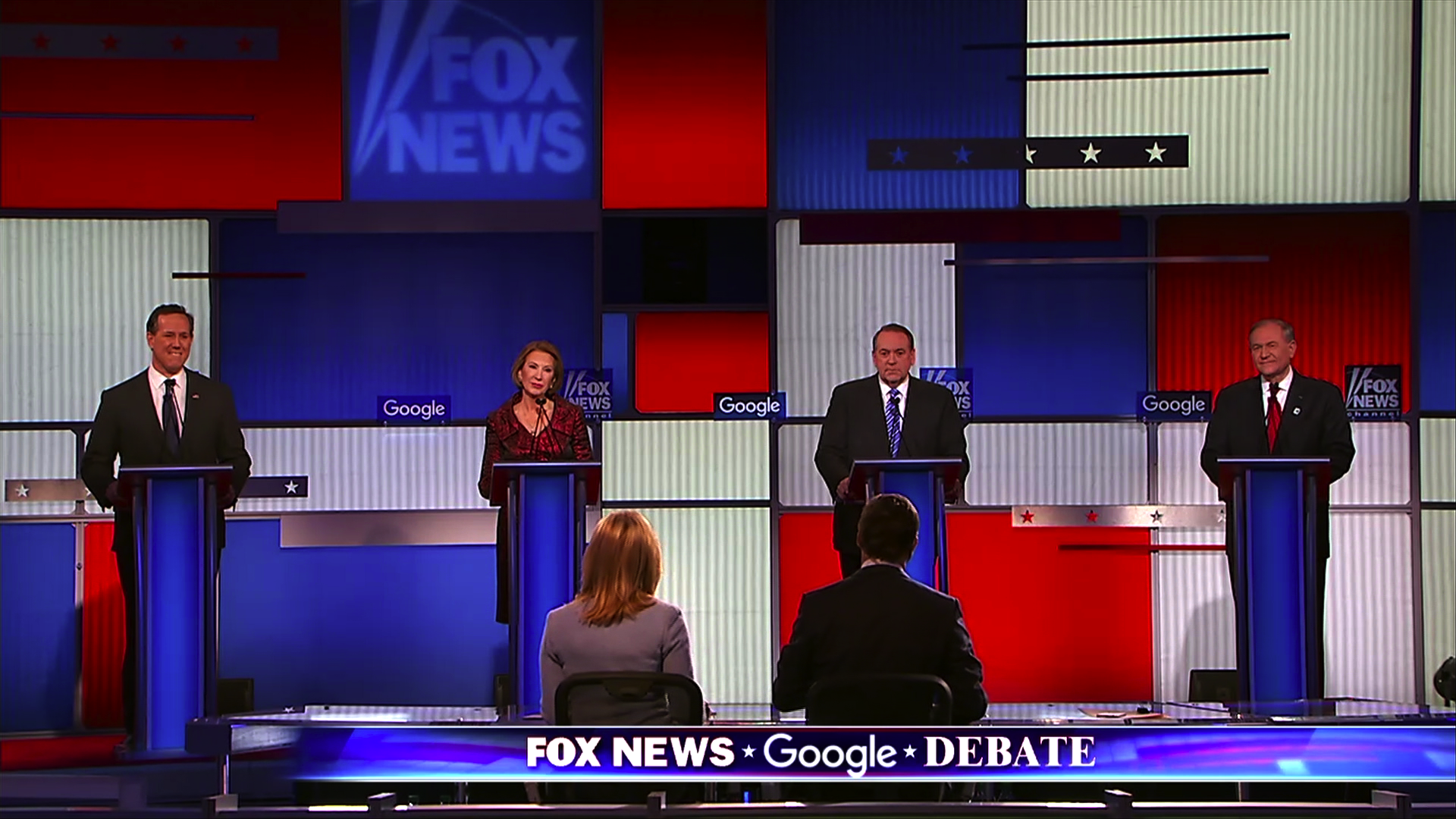 Santorum thanks Iowa, where he said he has done more than 700 speeches or town halls.

Huckabee began to recite the video his campaign did that channeled Adele's hit: "Hello, Iowa. It's me."

Fiorina asks Iowans to caucus for her on Monday.

7:50 p.m. Huckabee said he's not "feeling the Bern and said he doesn't understand how "anybody with IQ above plant life" wants big government.

7:46 p.m. Fiorina said that if she is elected president, her budgets would not have "one dime for Planned Parenthood."

Moderators asks Santorum why he didn't attend last Friday's "March for Life" pro-abortion rally in Washington, D.C. while Fiorina showed up. Santorum explained that he didn't want to get stuck in the major snow storm that hit the East Coast.

7:43 p.m. At the last undercard debate, Fiorina said that unlike Hillary Clinton, she actually loves spending time with her husband. But moderators pointed out that Fiorina said in September that she wouldn't engage in personal attacks. They asked what changed.

"It wasn't a personal attack," Fiorina said. "I was pointing out that Hillary Clinton will do anything to gain and hang onto power."

7:36 p.m. Moderators then asked Gilmore about gun control and the second amendment. Gilmore said that he's a board member of the NRA because he believes Americans can be trusted with guns.

"When Jim Gilmore is president of the United States, gun control is not going to be an issue. If gun control comes to the president's desk when I'm president, I'll veto it as fast as it takes Hillary Clinton eliminate her emails," he said, drawing applause.

7:33 p.m. Gilmore complains about the lack of time he's getting during the debate. He said the media is "manipulating" and "shaping" and "framing" this presidential campaign.

Huckabee said a lot of Americans are angry.

"I think it's important to understand why they're mad," he said, explaining that it's because people at the top are doing fine and the poor don't have the ability to move up. Huckabee said poverty programs keep people in poverty.

7:26 p.m. Fiorina acknowledges that his proposal for a three-page tax code would be difficult to achieve, arguing that it would take "the political establishment apart" and challenge the "status quo."

7:17 p.m. In order to defeat ISIS, Huckabee said that their land must be taken away in Iraq, the U.S. and its allies should take away terrorists' access to social media platforms and should go after them financially.

7:14 p.m. Fiorina was asked to comment on statements from President Obama in which he said it's not World War III.

7:06 p.m. Santorum confirms that he will attend Trump's event to help fundraise for veterans on Thursday night. He was asked whether that means he would endorse Trump, but Santorum dodged the question and said he's "not going to throw mud" at anyone on the lower-tier debate stage, main stage or at Trump.

7:02 p.m. Moderators ask Huckabee, who won the Iowa caucuses in 2008, why his message isn't resonating with voters this time around.

They ask a similar question to Santorum, who won the Iowa caucuses, in 2012. Santorum complains about the fact that the "undercard" debate isn't highlighted enough by the media.

"What Iowans deserve is to hear from every candidate from an equal footing," he said.

It's the first debate that Gilmore, a former governor of Virginia, has qualified for since August. Sen. Rand Paul, R-Kentucky, who boycotted the last undercard debate, has made it onto the main debate stage this time around.

Donald Trump has decided to boycott the debate -- the last one before Monday's Iowa caucuses -- and will hold a fundraiser in Des Moines for veterans instead.