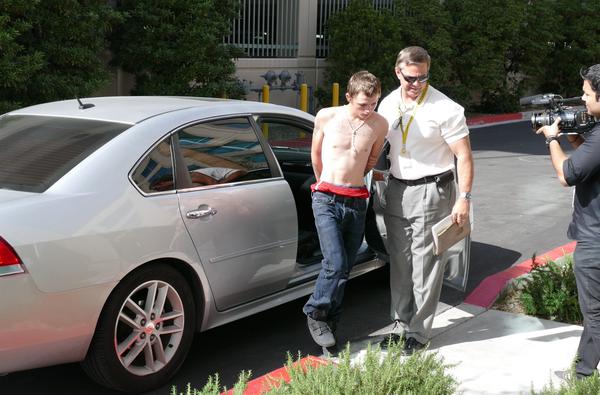 LAS VEGAS - Police have arrested a suspect in the killing of a woman who was gunned down a week ago in an apparent road-rage shootout after giving her daughter a driving lesson.

The male suspect - identified by CBS affiliate KLAS-TV as 19-year-old Erich Milton Nowsch Jr. - was arrested Thursday at a home just one block from where the victim, 44-year-old Tammy Meyers, lived.

The arrest came after a standoff and after SWAT teams surrounded the home. At one point, Meyers' husband showed up at the scene and attempted to cross the street in front of the house but he was held back by police. He then yelled, "There's the animal, a block away."

KLAS reports the home where the teen was arrested belongs to the suspect's mother, Kathleen Nowsch, who contacted police regarding her son.

According to the station, the 19-year-old faces charges of murder, attempted murder and discharging a gun within vehicle.

Public records show Nowsch was arrested in 2009 on a charge of petit larceny.

Police have said Meyers was shot in the head in her driveway last Thursday after confrontations that began when she was giving her 15-year-old daughter Kristal a driving lesson and the girl honked at a male driver she felt was speeding.

Police Lt. Ray Steiber has said Kristal Meyers told them that the man blocked their car, got out and said "some words" that "frightened Mrs. Meyers and her daughter, at which time Mrs. Meyers sped past him" and went home.

"Here's what happens when she gets home," the lieutenant continued. "Mrs. Meyers is scared, but she's upset. She tells her daughter to go wake up her son, 22, to wake him up and have him come outside and get in the car with her so later they can find who frightened them and her daughter out on the roadway."

"They left the house in search of that person," Steiber continued, and found a grey or silver four-door sedan matching the description of the car in the earlier confrontation. She followed the "suspect vehicle," then they broke apart and she drove home. Then the vehicle came into their cul-de-sac.

"There was a volley of rounds fired from that vehicle," and Brandon Meyers, Tammy Meyers' 22-year-old son "returned fire," the officer said. "When the firing was done, he found that his mother had been struck by gunfire. The suspect vehicle then backed out and sped away. That's what happened. Tammy is a victim."

At a vigil Tuesday night, Brandon Meyers spoke about his mother.

"She didn't deserve this," he said. "I did what I had to do to protect my family. Everyone can think what they have to think. I did it for a reason. And I'd do it for anyone I love."

Meyers' husband, Robert, who was out of town at the time of the shooting, said Friday that his son told him he believed there were three people in the car, and that he had hit the car at least once with a 9mm handgun.

He called his son a hero, and said his wife panicked when she went back out in search of the driver who frightened her.

"There was (sic) mistakes made, like every one of us has made in our lives, but this particular mistake was made to keep a bigger mistake from happening," Robert Meyers said.