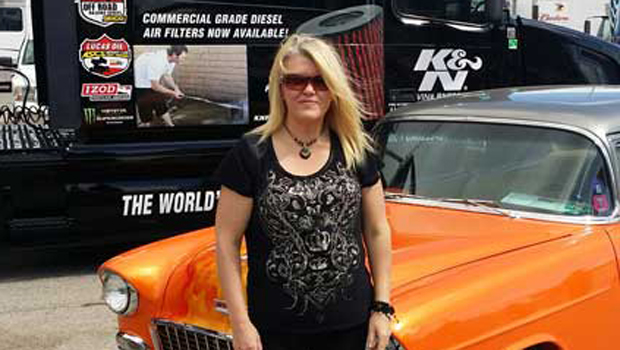 LAS VEGAS - The family of a Las Vegas mother of four who was killed in an apparent road rage shooting last week says she was just trying to protect her daughter when she went home to get her son and his gun, then drove around the neighborhood searching for a man who may have eventually killed her.

Police said Tuesday that 44-year-old victim Tammy Meyers was shot in the head in her driveway late week. The confrontations began when she was giving her 15-year-old daughter a driving lesson and the girl honked at a driver she felt was speeding, police said.

But police Lt. Ray Steiber said the fatal shooting was apparently a two-way shootout. After the initial confrontation during the driving lesson, Tammy Meyers roused her son, Brandon, from bed to grab his gun and go looking for the other driver.

She and Brandon found - and for a short time followed - the vehicle. When they returned home home, a vehicle described only as a four-door gray or silver sedan pulled up and someone inside opened fire.

"There was a volley of rounds fired from that vehicle," and Brandon Meyers "returned fire," the officer said. "When the firing was done, he found that his mother had been struck by gunfire. The suspect vehicle then backed out and sped away."

Tammy Meyers was hit in the head and died two days later.

"My mom was protecting me this night, you know? She was doing what every mother would do is protect her baby," 15-year-old Kristal Meyers said Tuesday night at a candlelight vigil in the cul-de-sac where the family lives, about 5 miles west of the Las Vegas Strip.

Police said the initial confrontation happened when Tammy Myers drove home slowly on Thursday, Feb. 12 from a school parking lot, where she had been teaching Kristal to drive. The teen did not have a learner's permit.

Brandon Meyers, 22, defended the armed search while speaking at the vigil on Tuesday.

"I did what I had to do to protect my family. Everyone can think what they have to think. I did it for a reason and I'd do it for anyone I love," Brandon Meyers said.

"If I could make some kind of medal right now, I'd do it."

Bob Meyers was in California at the time of the incident. He added a last message to his wife:

Steiber pointed to a police artist's sketch of a man sought for questioning, which was released over the weekend. He said the man is believed to be in his mid-20s with blond hair and blue or hazel eyes, and was wearing a V-neck T-shirt.