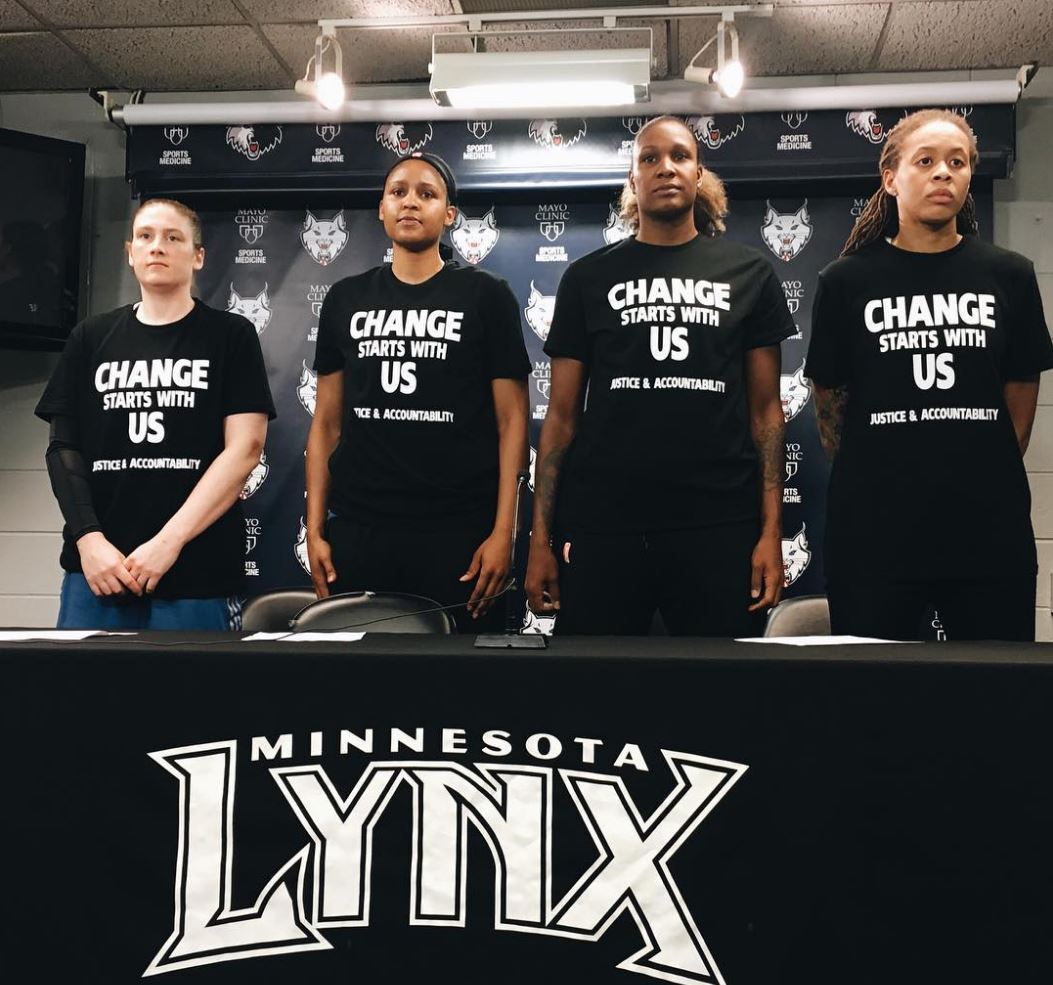 MINNEAPOLIS - The Minnesota Lynx voiced their support for social change on Saturday night, and local police officers are furious about it.

The WNBA team wore black warmup shirts that said on the front, "Change starts with us. Justice & Accountability." On the back of the shirt were the names Philando Castile and Alton Sterling, both fatally shot by police officers this past week. Castile was killed by a suburban St. Paul police officer during a traffic stop. Also on the back of the shirt is the Dallas police shield above the phrase "Black Lives Matter."

According to the Minneapolis Star Tribune, police officers are furious about their message. The four off-duty cops who had been hired to work the game walked off the job when they heard about the players' social statement.

Lt. Bob Kroll, president of the Minneapolis Police Federation, the union that represents rank-and-file officers, told the Star-Tribune the four officers removed themselves from the list for working future games, which they do on an independent contract. Additionally, Kroll said that "if [the players] are going to keep their stance, all officers may refuse to work there."

Team captains Rebekkah Brunson and Maya Moore spoke before their game against the Dallas Wings on Saturday night, and the Lynx posted the news conference on their Facebook page. The two players were flanked by Minnesota's other captains Lindsay Whalen and Seimone Augustus.

"If we take this time to see that this is a human issue and speak out together, we can greatly decrease fear and create change," Moore said. "Tonight we will be wearing shirts to honor and mourn the losses of precious American citizens and to plea for change in all of us."

Moore also spoke during the nearly 5-minute news conference about the Dallas shooting where five police officers were killed, which the players described as a "senseless ambush." She praised that city's effort on leading the way in "de-escalation training and other efforts that led to a noticeable drop in the number of shootings by officers in the last few years."

One of the incidents that has set off the recent round of nationwide protests against police violence happened in neighboring St. Paul, where Philando Castile, a black man, was shot and killed inside a car in front of his girlfriend and her young daughter by a white police officer.

Moore, the 2014 WNBA MVP, said they players were both mourning the unnecessary loss of life, as well as "highlighting a longtime problem of racial profiling."

The police union spokesman Kroll slammed players for speaking out, and according to the Star Tribune, he warned against "'false narratives' in the past two years in which some allegations of police misconduct in the killing of black people were refuted."

"Rushing to judgment before the facts are in is unwarranted and reckless," he said.

Kroll also mocked the WNBA team, saying there were only ever four off-duty officers working there in addition to normal stadium security "because the Lynx have such a pathetic draw."