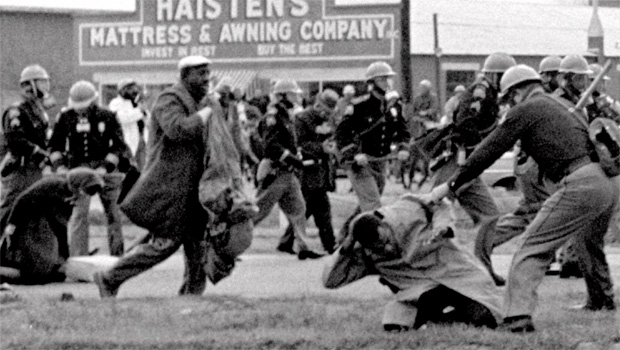 There is a certain symbolism in a bridge. A bridge crosses divides, joining two sides as one.

This bridge moves people across the Alabama River, and yet it also moves us in ways far more profound.

Its namesake, Edmund Pettus, was a U.S. Senator in the early 1900s. Prior to that, he had been the Grand Dragon of the Alabama Ku Klux Klan.

So there is a fitting, if unintended, symmetry in what took place here 50 years ago -- when the divide between black America and white America could be denied no longer.

On Sunday, March 7, 1965, some 600 marchers set out from Selma, Alabama, bound for the State Capitol in Montgomery, protesting the shooting of young civil rights worker Jimmie Lee Jackson.


They made it only to the Edmund Pettus Bridge, where authorities set upon them.

The violence of that "Bloody Sunday" was broadcast across the nation.

Martin Luther King Jr. came to Selma soon after and completed the march. Young CBS News reporter Bill Plante was there and -- with thousands behind them -- managed to speak with King.

Plante: "Have all the activities of the past weeks in Selma come to fruition now? Is this the grand climax?"
King: "I would say this and its culmination in the march on the capital on Thursday, this is certainly the high moment, and the high point in the struggle in Alabama."

Moved by outrage over Selma, President Lyndon Johnson signed the Voting Rights Act into law, guaranteeing equal access to the polls for all.

The consequences have been remarkable; African-Americans are now a potent political force.

But nothing has come easy. Just ask George Evans, the Mayor of Selma.

"Having a right to vote just didn't happen by accident," Evans said. "It happened as a result of people making a sacrifice -- both black and white -- for the benefit of giving rights to all people to vote and have a better quality of life, and change the whole momentum of this whole nation."

But recently, that momentum has shifted.

In 2013, the Supreme Court rolled back a section of the Voting Rights Act, easing federal oversight of voting laws in several states. Chief Justice Roberts even cited Selma's African-American mayor as evidence the Act has already achieved many of its goals.

Debate over that decision will continue for years to come.

Yesterday, President Obama stood at the Edmund Pettus Bridge, and reflected on our nation's five-decade journey:

"When the trumpet call sounded for more to join, the people came," Mr. Obama said. "Black and white, young and old, Christian and Jew, waving the American flag and singing the same anthems full of faith and hope.

"A white newsman, Bill Plante, who covered the marches then and who is with us here today, quipped that the growing number of white people lowered the quality of the singing. To those who marched, though, those old gospel songs must have never sounded so sweet."

Bill Plante sat down with President Obama to ask his thoughts on how what happened in Selma has impacted the nation, and his own life. You can read that interview here.