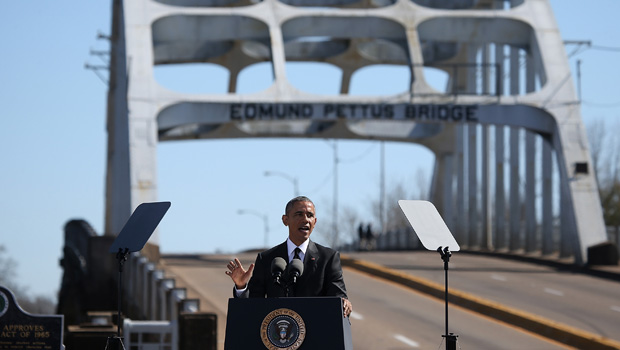 On the 50th anniversary of "Bloody Sunday," President Barack Obama spoke at the Edmund Pettus Bridge, site of the violent clashes that helped galvanize support for passage of the Voting Rights Act of 1965.

In one afternoon fifty years ago, so much of our turbulent history -- the stain of slavery and anguish of civil war; the yoke of segregation and tyranny of Jim Crow; the death of four little girls in Birmingham, and the dream of a Baptist preacher -- all that history met on this bridge.

It was not a clash of armies, but a clash of wills; a contest to determine the meaning of America.

What they did here will reverberate through the ages. Not because the change they won was preordained; not because their victory was complete; but because they proved that nonviolent change is possible; that love and hope can conquer hate.

What could more profoundly vindicate the idea of America than plain and humble people -- unsung, the downtrodden, the dreamers not of high station, not born to wealth or privilege, not of one religious tradition but many -- coming together to shape their country's course?


Fifty years from Bloody Sunday, our march is not yet finished. But we are getting closer. Two hundred and thirty-nine years after this nation's founding, our union is not yet perfect. But we are getting closer. Our job's easier because somebody already got us through that first mile. Somebody already got us over that bridge. When it feels the road's too hard, when the torch we've been passed feels too heavy, we will remember these early travelers, and draw strength from their example, and hold firmly to the words of the prophet Isaiah:

"Those who hope in the Lord will renew their strength. They will soar on wings like eagles. They will run and not grow weary. They will walk and not be faint."

We honor those who walked so we could run. We must run so our children soar. And we will not grow weary. For we believe in the power of an awesome God, and we believe in this country's sacred promise.

May He bless those warriors of justice no longer with us, and bless the United States of America.