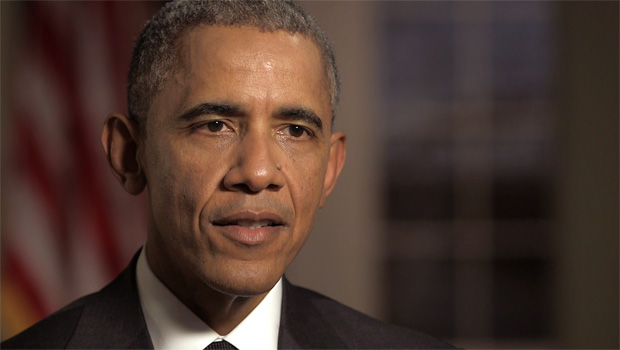 President Barack Obama marked the 50th anniversary of the "Bloody Sunday" civil rights march in Selma, Ala., Saturday, telling those assembled -- many of whom had marched for voting rights that day -- that "our march is not yet finished."

In an exclusive interview with CBS News senior White House correspondent Bill Plante (who covered the civil rights marches in 1965) at the nearby National Voting Rights Museum, Mr. Obama spoke about Selma, then and now.

"Mr. President, when you look at this mural here, I'm reminded that you said here eight years ago, that you're here because somebody marched," said Plante.

"Not only would I not be here, because I think our society wouldn't have changed as much in 50 years, but this is also the source of inspiration that got me involved in public service in the first place," said Mr. Obama. "Now, when I was young I didn't have aspirations to be the President of the United States, but by the time I was in my late teens, early 20s, I'd started reading about the civil rights movement, and it fascinated me.

"And the reason it fascinated me was the idea that ordinary people, humble people -- maids and domestics and Pullman porters -- that they could have the courage to take on some of the most powerful forces in our society.


"And to see the concept of non-violence mobilized in this way, to bring about ultimately changes in the law that made America better -- what an extraordinary gift that is."

"As several people in the movement keep saying, you can change the law but you can't change peoples' minds," said Plante. "How do you do that?"

"I think Dr. King was asked about that some time during the movement, and he said, 'Well, I might not be able to immediately change somebody's heart and mind, but if I can prevent them from lynching me, that's important, too," said the president. "What happens is, when laws change, then attitudes begin to change.

"When I hear people say, 'Oh, not much has changed,' that's just not true. Bill, you were here, and you know how much it's changed. It's changed not just because we have an African-American president; it's changed in all kinds of people's daily interactions."

"Mr. President, why is there such a disparity in the way blacks and whites see race relations?"

"Well, there's been obviously a different experience of race relations in this country," said Mr. Obama. "You know, the good news is that, despite I think a lot of people saying that the country's divided around these issues, the truth is in the aftermath of Ferguson and what happened in New York, you've seen a pretty constructive debate, a pretty constructive conversation."

Plante asked about the Voting Rights Act, which in a 2013 decision the Supreme Court elected to ease federal oversight of voting laws in several states. Chief Justice Roberts even cited Selma's current mayor, an African-American, as evidence that the Act has already achieved many of its goals. Critics have charged that voter ID laws passed in many states actually make participation int eh franchise more difficult for some, especially minority voters.

"You urged Congress to do something to repair what the Supreme Court took away," said Plante. "But at the same time you've got a large majority of both blacks and whites in our polling who say voter ID, no problem, they're for it."

"Well, you know, voter ID in and of itself is not the sole issue," said the president. "The issue is, does the Justice Department have the tools through the Voting Rights Act to make sure that if a local jurisdiction is discriminating against a certain set of voters -- black, Hispanic, white, Asian -- that the Justice Department can actually get in there and fix it?

"And when it comes to voter ID, I think what the average person says to themselves [is], 'Yeah, there's nothing wrong with a photo ID,' until perhaps they get the information -- which is not always provided during polling -- that in some jurisdictions getting a voter ID might cost 75, 100, 150 bucks. If you are somebody who is a senior citizen, on a fixed income, and you're not driving anymore and you don't automatically have a driver's license, that may be hard."

In response to a question about the ongoing negotiations with Iran to halt their pursuit of nuclear weapons, the president said, "I think it is fair to say that there is an urgency because we now have been negotiating for well over a year. And the good news is that during this period Iran has abided by the terms of the agreement. We know what's happening on the ground in Iran. They have not advanced their nuclear program. So we're not losing anything through these talks.

"On the other hand, you get to a point in negotiations where it's not a matter of technical issues any more; it's a matter of political will."

"And you said that if there's no deal you're willing to walk away, that's it?" asked Plante.

"Absolutely," said Mr. Obama. "If there's no deal then we walk away. If we cannot verify that they are not going to obtain a nuclear weapon, that there's a breakout period so that even if they cheated we would be able to have enough time to take action, if we don't have that kind of deal, then we're not going to take it."

Another of the president's concerns in the Middle East is the so-called Islamic State in Iraq.

"Right now Iran is allied with, fighting alongside Iraq to take out the Islamic State near Tikrit," said Plante. "And the U.S. is sitting on the sidelines. Are you comfortable with that?"

"I don't think that the U.S. is sitting on the sidelines," said the president. "We've got a lot of stuff going on in Iraq. What we've been very clear about is that our top priority is making sure that ISIL is rolled back. What is also true, though, is that the only way to maintain long-term stability inside of Iraq is if the Sunni minority feels invested in their country the same way that the Shia majority does."

Mr. Obama was also asked about the current controversy in Washington, with news that Hillary Clinton improperly used her personal e-mail account while serving as Secretary of State.

"Mr. President, when did you first learn that Hillary Clinton used an email system outside the U.S. government for official business while she was Secretary of State?"

"The same time everybody else learned it, through news reports," he replied.

"Let me just say that Hillary Clinton is and has been an outstanding public servant," Mr. Obama said. "She was a great Secretary of State for me.

"The policy of my administration is to encourage transparency. And that's why my emails through Blackberry that I carry around, all those records are available and archived. And I'm glad that Hillary has instructed that those emails that had to do with official business need to be disclosed."

No president can ever escape the concerns of his office. But yesterday it was clear this president relished his moment in history.

In his speech at the Edmund Pettus Bridge in Selma, Mr. Obama said, "Selma shows us that America is not the project of any one person. Because the single most powerful word in our democracy is the word 'We.' We The People. We Shall Overcome. Yes, We Can. That word is owned by no one; it belongs to everyone."

For more from Bill Plante's exclusive interview with President Obama watch "Face the Nation" on Sunday, March 8, at 10:30 a.m. ET.

As part of CBS News' coverage marking the 50th anniversary of the civil rights march in Selma, CBSN will be airing an encore presentation of the hour-long special "The Road to Civil Rights," anchored by Bill Whitaker and featuring new and archival footage from the CBS News library, Sunday at 11 a.m. ET.