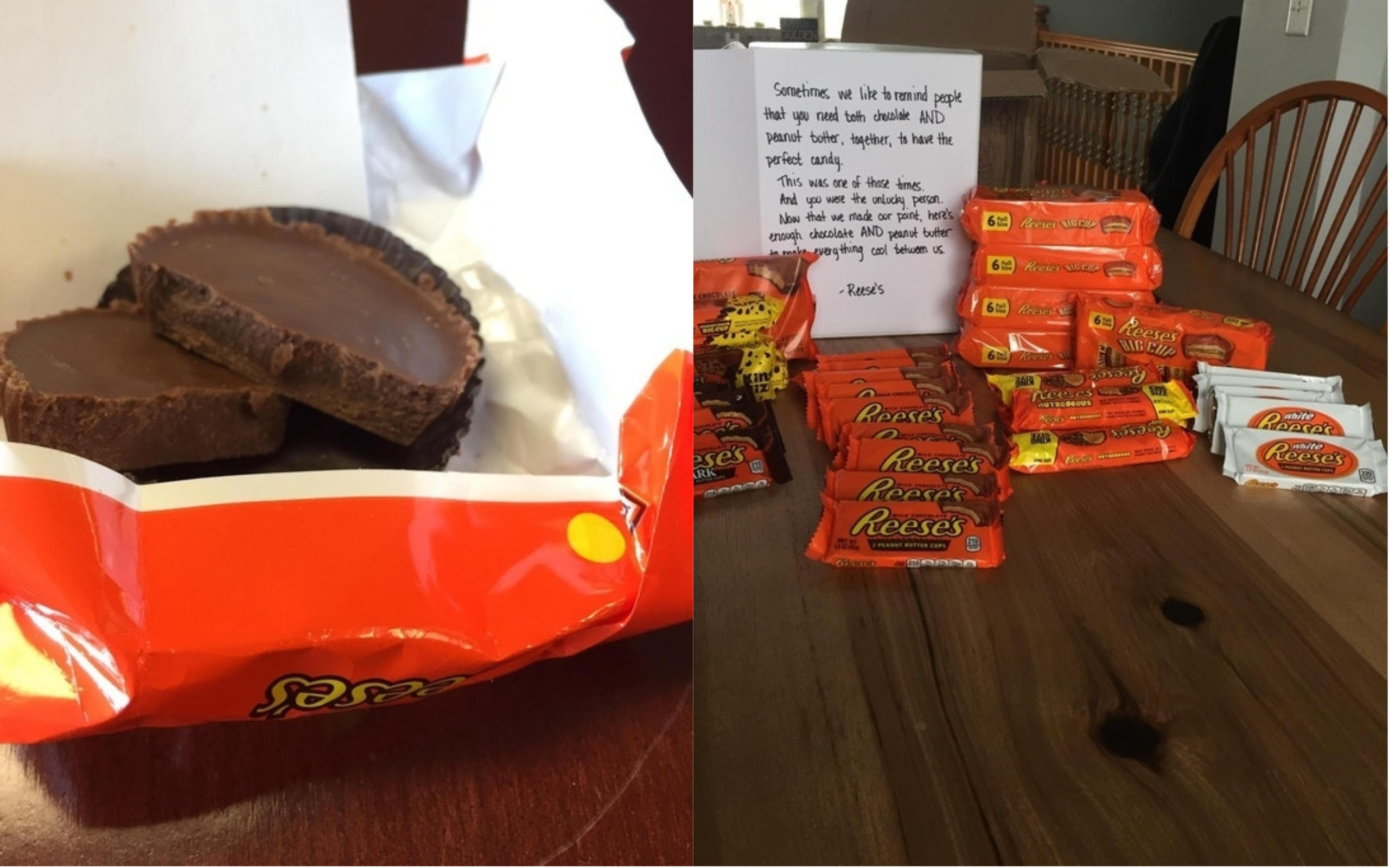 In April, Alex Hentges of Dubuque, Iowa, opened up a Reese's Peanut Butter Cup, ready to enjoy a chocolatey, peanut buttery treat, only to be disappointed. The cup was solid chocolate -- no peanut butter in the middle, which is what makes a Reese's a Reese's.

Hentges took to Reddit to share his experience. "My Reese's Peanut Butter Cup had no peanut butter," he wrote as the caption to a photo showing the solid chocolate cup. As more proof, Hentges even posted a video of himself breaking open another Reese's cup from the package, only to find no peanut butter inside. The images went viral and received a barrage of comments. "Somewhere out there someone is getting an all peanut butter Reese's cup," one commenter wrote.

"If you sent that photo to them they would bombard you with gifts. For real.., I know from first hand experience working for companies similar to them," one person commented on the Reddit post. It's unclear if this inspired Hentges to write to Reese's, but he eventually did.

"Yo Reese's what gives? Where's me peanut butter? April Fools was almost 2 weeks ago!" Hentges wrote, sharing the photo on Reese's Facebook.

Well, a few weeks later, Hentges got another, much more pleasant surprise from Reese's. The company saw his photo of the no-peanut butter fiasco, and sent him a replacement. In fact, they sent Hentges an entire care package full of Reese's products to make up for the snafu.

The package also came with a note.

"Here's enough chocolate AND peanut butter to to make everything cool between us," the company wrote.

Hentges updated his Reddit to show the results of his complaint. "Reese's replied to my peanut butter-less cup," he wrote. The photo of the care package soon went viral as well.

"I need to find me some peanutbutterless cups and post pics on reddit," one person commented. Others thought it might've been Reese's plan all along: "Reese's was totally hoping this guy to share this on social media and get free advertisement," someone commented.

"They sent you $20 of chocolate and got $100,000 worth of free advertisement, you can't beat that return on investment. I'll be back, I'm craving some peanut butter and chocolate," one person wrote. Others just shared similar stories of food misfortunes that turned into freebies.

Hentges accepted Reese's gift with open arms and a hungry stomach -- although he says he did share some of it with his coworkers.