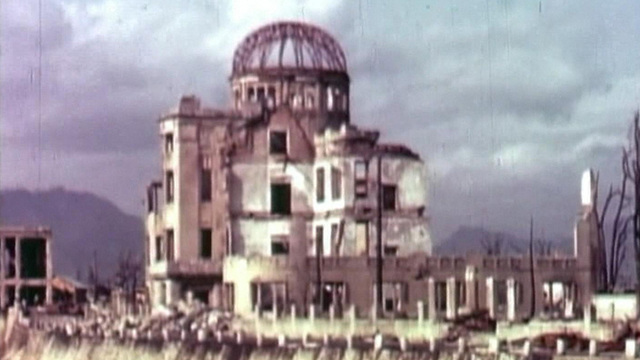 JAPAN -- Rare video shot by the U.S. military in 1945 shows Hiroshima right after it was hit with an atomic bomb.

On Friday, President Obama will make a historic visit to the city. It will be the first time a sitting U.S. president has visited the site of the first atomic bomb attack.

The words of President Obama and Japanese Prime Minister Shinzo Abe during the visit advocating nuclear disarmament will clash with real-world security necessities.

Mr. Obama is expected to highlight the catastrophic dangers of nuclear warfare.

Far from backing up the vision of a world without nuclear bombs that Mr. Obama laid out in a 2009 speech that helped secure a Nobel Peace Prize, his near-finished presidency has seen a multibillion-dollar modernization of the U.S. nuclear force.

Watching from the audience will be at least three Japanese survivors of the U.S. nuclear attacks, according to the Kyodo news agency.

Japan's long postwar commitment to disarmament, meanwhile, is only possible because of its reliance on the so-called American "nuclear umbrella" that protects it from antagonistic North Korea and China. Tokyo, should it choose, could probably easily convert its advanced civilian nuclear program into a weapons program, and some conservatives in Abe's ruling party have argued that the country's pacifist constitution technically allows nuclear weapons.

Despite his own mixed record on nukes, Mr. Obama likely sees his Hiroshima visit as a worthwhile expenditure of political capital in order to shore up a global nonproliferation effort that seems at times to be crumbling.

Before the most recent of a series of nuclear security summits meant to reduce and protect nuclear material, Mr. Obama wrote in March that eliminating all nuclear weapons may not happen in his lifetime.

"But we have begun. As the only nation ever to use nuclear weapons, the United States has a moral obligation to continue to lead the way in eliminating them. Still, no one nation can realize this vision alone. It must be the work of the world."

Mr. Obama's vision of a world without nuclear weapons was challenged almost immediately.

His April 2009 speech in Prague happened within hours of North Korea's launch of a long-range rocket that outsiders, including the United Nations, called a cover for a test of banned missile technology. Pyongyang is still barreling ahead in its push for nuclear-armed missiles that could reach the U.S. mainland.

Mr. Obama secured a deal meant to limit Iran's nuclear program, if it can be implemented amid mistrust on both sides. But Pakistan and India are still locked in a nuclear standoff. The United States and Russia, which have most of the world's nuclear weapons, often see their geopolitical jockeying for position interfere with disarmament efforts. And there are growing worries about the security of nuclear fuel sites around the world.

Mr. Obama's trip to Hiroshima also comes amid anxiety that North Korea's growing nuclear and missile capabilities could lead to the top U.S. allies in Asia, Japan and South Korea, starting their own nuclear weapons programs.

It is highly unlikely either country will go nuclear. It could cause huge political and economic damage -- crippling sanctions, global condemnation -- and jeopardize their alliances with the United States.