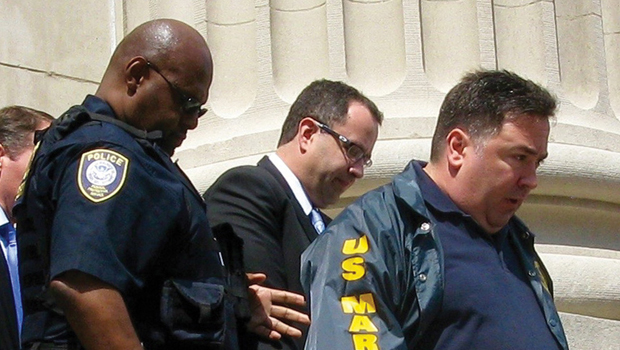 INDIANAPOLIS -- Attorneys for former Subway pitchman Jared Fogle asked a judge for leniency Thursday as he awaits sentencing on child pornography and sex-crime charges. The lawyers said in court documents that Fogle "is profoundly sorry."

Fogle, a 38-year-old father of two, became a Subway spokesman after shedding more than 200 pounds as a university student, in part by eating the chain's sandwiches. Subway ended its relationship with Fogle after authorities raided his suburban Indianapolis home in July.

Fogle's lawyers are asking for a five-year prison term at next week's sentencing, the minimum they said they would seek when he agreed in August to plead guilty to one count each of travelling to engage in illicit sexual conduct with a minor and distribution and receipt of child pornography.

Prosecutors submitted their own sentencing memorandum Thursday requesting a 12 ½-year term - the most they'd agreed to seek under the plea deal -- and a lifetime of supervision following his release.

However, federal judges have wide discretion, and Judge Tanya Walton Pratt could go beyond the prosecution's recommendation at the Nov. 19 sentencing. The child-porn charge carries a maximum 20 years in prison, and the sex with a minor count is punishable by up to 30 years.

The sentencing requests were filed the same day one of the child-pornography victims receiving restitution from Fogle went public about her ordeal.

The girl, now 16, appeared on the syndicated Dr. Phil Show. She described being secretly recorded at age 14 by Russell Taylor, who ran a nonprofit Fogle started to raise awareness and money to fight childhood obesity.

The Dr. Phil show also aired secret recordings in October after Fogle was recorded by a woman who had befriended him and then became an FBI informant. The woman, Rochelle Herman-Walrond, is a former radio host who interviewed him and became suspicious when she overhead him say he found middle school girls attractive.

"I was stunned," she recalled. "I was shocked."

Prosecutors have said Taylor secretly filmed minors and passed some photographs and videos of minors on to Fogle. The girl said she was among three youths who drank alcoholic beverages at Taylor's house and became intoxicated.

"He took my happiness," she said of Taylor. "He took my trust. He took my pride. Everything."

U.S. Attorney's office spokesman Tim Horty said Thursday "it's very unusual" for federal prosecutors to confirm victims of child pornography, but said he could confirm she was among Fogle's 14 victims because the teenager chose "to make herself public."

The show identified the girl only as Annalissa, and there were no efforts to obscure her appearance during the on-camera interview

Authorities said Taylor secretly filmed 12 minors as they were nude, changing clothes, or engaged in other activities using hidden cameras in his Indianapolis-area residences to produce child pornography. He has agreed to plead guilty to child exploitation and child pornography charges.

Prosecutors said in Thursday's filing that Fogle received photos or videos from Taylor of eight of those 12 youths, receiving images of girls as young as 12. Fogle could have stopped Taylor from victimizing some of minors, prosecutors have said, but they say he instead encouraged Taylor to produce additional child pornography.

Court documents detailing the charges against Fogle say he had sex at New York City hotels with two girls under age 18 - one of whom was 16 at the time - and paid them for that sex.