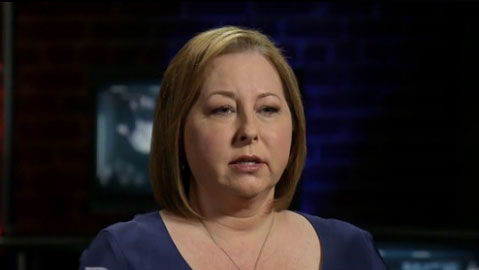 New evidence that led investigators to the arrest of former Subway Spokesman Jared Fogle is surfacing, and on Thursday secret-recorded tapes in his own words aired on the daytime talk show "Dr. Phil."

Fogle was secretly recorded by a woman who had befriended him and then became an FBI informant. The woman, Rochelle Herman-Walrond, is a former radio host who interviewed him and became suspicious when she overhead him say he found middle school girls attractive.

"I was stunned," she recalled. "I was shocked."

Fogle became a household name as a pitchman for Subway, and used his fame to establish a foundation promoting healthy lifestyles among children. Fogle pleaded guilty to one count of distributing and receiving child pornography and one count of crossing state lines to engage in illicit sex with minors.

In one of the tapes that aired on Dr. Phil's show on Thursday, Fogle can be heard saying, "...early middle school is probably one of the best."

"I like all ages. That's the thing I mean. It depends...who is ready for what. You know, who's going to give you the glance," he said in one of the recording.

In November 2006, Herman-Walrond had him on her radio show again after their first encounter where he made a suggestive comment about middle school children calling girls of that age "hot."

"I wasn't comfortable having him on my show, but as a journalist, I wanted to dig deeper," she told Dr. Phil. "I wanted to find out more."

Dr. Phil asked if it worried Herman-Walrond to have him on her show again.

"It worried me, but if he was going to say something again I wanted to be able to have the opportunity to hear it," she said.

After that, she began developing a relationship with Fogle and she said she began, "baiting" him. She said he seemed to almost instantly trust her.

Eventually, she began recording Fogle and saving text messages between them. She brought them to the FBI. And that's when the FBI asked her to become an informant.

"He had no filter whatsoever," she said.

He discusses how girls from a broken-home "could work."

"What if we, what if we put a camera in your kids' room, would they be okay with that?," he asked her in the recording. "Would you rather have it in your son or your daughter's room? Which one do you think would be better?"

Subway cut ties with its spokesman following his arrest. In September, the chain said Hermand-Walrond made a serious complaint about Fogle in 2011, but that it had been mishandled.

Dr. Phil said Herman-Walrond had to distance herself from her kids and family for hours after talking with Fogle.

"And it took a lot of time from her family and changed who she was. That was a very painful thing for her," said Dr. Phil.

Herman-Walrond said she had nightmares constantly. She would scream in her pillow at night.

Herman-Walrond told Dr. Phil the process of recording Fogle took so long because the FBI said Fogle wasn't the main target, and there were other targets in the investigation as well.

"Dr. Phil" -- which is distributed by CBS television -- is devoting two episodes to the audio recordings -- one airing Thursday and another airing Friday.

Fogle is facing five to 12 and a half years in prison and up to a $500,000 fine. His attorney declined to comment.