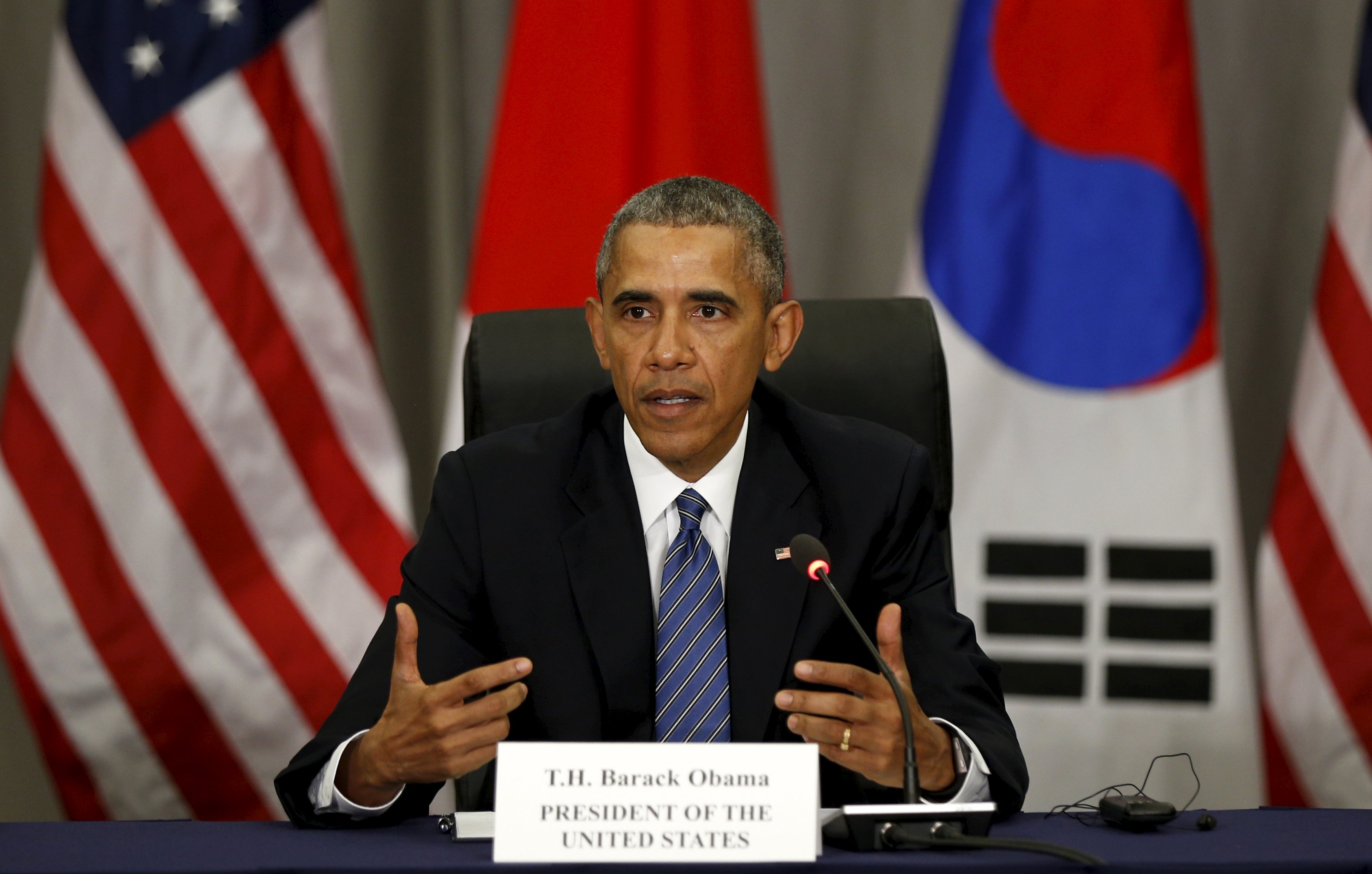 WASHINGTON-- In the face ofmounting threats from North Korea, President Obama on Thursday urged closer security ties among its chief allies in Asia and increased cooperation with strategic rival China to discourage Pyongyang from making further advances in nuclear weapons.

Then Mr. Obama met Chinese President Xi Jinping and both called for North Korea to give up its nuclear weapons. China also agreed to implement in full the latest economic restrictions imposed by the U.N. Security Council against Pyongyang.

More than 50 governments and international organizations are attending the two-day summit on preventing nuclear terrorism -- the last in a series of global meetings Mr. Obama has championed on the issue. The risk posed by the Islamic State of Iraq and Syria (ISIS) tops this year's agenda but concerns about North Korea are also commanding focus.

"Of great importance to both of us is North Korea's pursuit of nuclear weapons, which threatens the security and stability of the region. President Xi and I are both committed to the denuclearization of the Korean Peninsula," Mr. Obama said at the start of his meeting with Xi.

"China and the U.S. have a responsibility to work together," Xi said in his comments made to reporters through an interpreter. As for their "disputes and disagreements," the Chinese leader said the two sides could "seek active solutions through dialogue and consultation."

North Korea's fourth nuclear test in January, followed by a space a launch in February, have heralded more convergence among often-fractious powers in East Asia - at least on the need to press the government of Kim Jong Un toward disarming.

Japan and South Korea have persuasive reasons to get along. They both host U.S. forces and are both in range of North Korean missiles. But their relations have been plagued by historical differences that date back to Japan's colonial occupation of Korea in the first half of the 20th century and its military's use of sex slaves during World War II.

But those tensions have eased some. Abe said North Korea nuclear and missile capability is a "direct and grave threat" to them all.

"Should it choose to undertake yet another provocation, it is certain to find itself facing even tougher sanctions and isolation," Park said of Pyongyang.

Young leader Kim Jong Un has also alienated the North's traditional benefactor and main trading partner, China. The U.S. has long urged Beijing to take a more forceful role in pressing North Korea, and Chinese Vice Foreign Minister Zheng Zeguang said after the Obama-Xi meeting that the two sides agreed the new U.N. resolution "should be implemented in full and in its entirety."

The U.S. and China also released joint statements vowing robust collaboration to improve nuclear security and to implement a global climate change deal, and reported progress on the issue of cyber security.

But they were at stark odds in other areas.

According to Zheng, Xi told Mr. Obama that China was "firmly opposed" to the U.S. deploying a new missile defense system in South Korea, saying it was against China's national security interests and would the effect the strategic balance in the region.

The U.S. and Seoul are considering that deployment to counter the threat from the North. China contends the system would also give the U.S. radar coverage over Chinese territory. Russia opposes it as well.

Tensions appear set to intensify with an upcoming ruling from an international tribunal that could challenge the legal basis of some of Beijing's sweeping territorial claims. The U.S. has supported the right of its ally, the Philippines, to submit the case and says the ruling should be binding on both parties, although China has boycotted the proceedings and says it will ignore it.

Xi told Mr. Obama that the South China Sea islands - claimed by several other Asian governments - have been China's territory since ancient times and it has the right to defend its territorial sovereignty and maritime rights, Zhang said.

At the first ever nuclear summit in 2010, President Obama called for a common security approach.

"The most effective way to prevent terrorists and criminals from acquiring nuclear materials is through strong nuclear security," the president said.

On Wednesday, Mr. Obama penned an op-ed in the Washington Post on nuclear security.

"Of all the threats to global security and peace, the most dangerous is the proliferation and potential use of nuclear weapons. That's why, seven years ago in Prague, I committed the United States to stopping the spread of nuclear weapons and to seeking a world without them," Mr. Obama wrote.

Mr. Obama also met Thursday with French President Francois Hollande, amid steep concerns about terrorism in Europe following ISIS-linked attacks in Paris and Brussels. The nuclear security summit continues on Friday with a special session focused on preventing ISIS and other extremists from obtaining nuclear materials and attacking urban areas.

On Thursday, the U.S. said a strengthened nuclear security agreement among nations was finally set to take force following ratification by a critical mass of countries. The stricter rules include new criminal penalties for smuggling nuclear material and expanded requirements for securing materials and nuclear facilities worldwide, and are intended to reduce the likelihood of terrorists getting their hands on ingredients for a bomb.

Fissile materials like highly enriched uranium and separated plutonium can be used to make nuclear bombs.