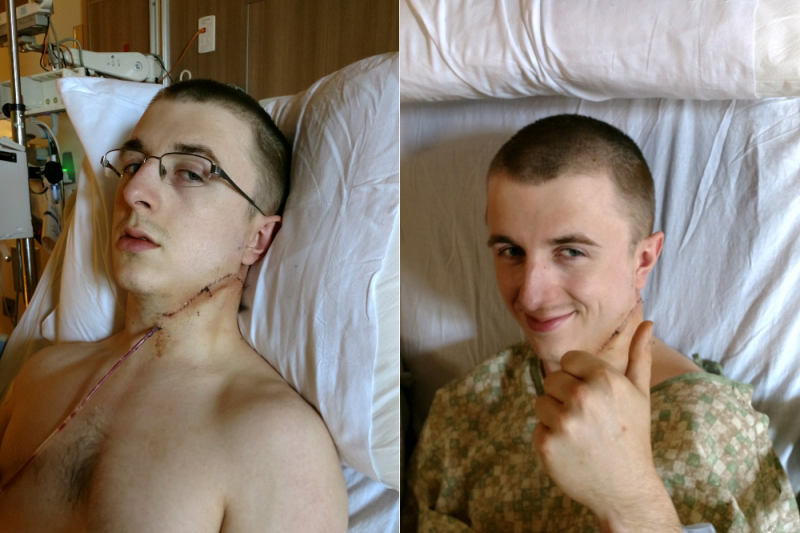 PORTLAND, Ore. -- A victim who survived a stabbing attack after confronting a suspect allegedly yelling hate speech at two young women on a Portland light rail train has been released from the hospital, reports CBS affiliate KOIN.

Micah David-Cole Fletcher, 21, suffered a slash wound to his neck and chest. Two other men who also came to the aid of the young women -- Ricky John Best, 53, and Taliesin Myrddin Namkai-Meche, 23 -- were killed in the incident.

The attack happened Friday, the first day of Ramadan, the holiest time of the year for Muslims. Authorities say 35-year-old Jeremy Joseph Christian started verbally abusing two young women, including one wearing a hijab. When three men on the train intervened, police say Christian attacked them with a knife, killing two and wounding one.

He is expected in court Tuesday afternoon.

Picures posted on a GoFundMe account show a wounded Fletcher giving a thumbs up from a hospital bed. Fletcher is now recovering at home with family, the station reports.

Fletcher, Best and Namkai-Meche are all being hailed as heroes. But Fletcher's grandmother tells KOIN another hero emerged from the attack -- an Iraq war veteran who she says helped Fletcher, possibly saving his life.

"He knew something was wrong, got off the train, saw Micah in bad shape and calling for help -- he just went over and helped him," Janice Heater said. "[He] took off his shirt and blocked the wound."

Fletcher still has a long way to go, but he is expected to make a full recovery, KOIN reports.

Heater said her family is devastated over the attack that claimed two other lives.

"We are just so sorry," Heater said. "We are very distraught over what happened to them and we are very sad for their families."

She said her grandson has stood up to social injustice before.

While Fletcher was in the hospital, he told police that Christian was yelling racial and religious epithets and threatened to decapitate people on board the MAX train, according to a detective's probable cause statement obtained by KOIN.

Police have secured video which shows the knife attack, according to the affidavit. The video captures Christian's alleged racist remarks.

Fletcher is a student at Portland State University and was taking the train from classes to his job at a pizza shop when the attack occurred.

Namkai-Meche earned a bachelor's degree in economics in 2016 from Reed College in Portland and landed a job with the Cadmus Group, a consulting firm in the area. He had just bought a house and hoped to start family, KOIN reports. Witness Rachel Macy told the station that as she tried to help him, he said, "'Tell them, I want everybody to know, I want everybody on the train to know, I love them."

Best, a father of four, was an army veteran and City of Portland employee. His family said standing up for strangers was in his character, CBS News' Mireya Villarreal reports.

Best worked for the Bureau of Development Services as a technician and ran for a position on the Clackamas County Commission in 2014 after retiring from the U.S. Army in 2012. He served in Iraq and Afghanistan during his 23 years of service.

Christian, the suspect, served prison time after holding up employees at a convenience store with a gun in 2002, court records show. Telephone messages left at the home of Christian's mother Sunday and Monday were not returned. It was not clear if he had a lawyer yet.

KOIN reports he was listed as a transient and unemployed after his arrest.