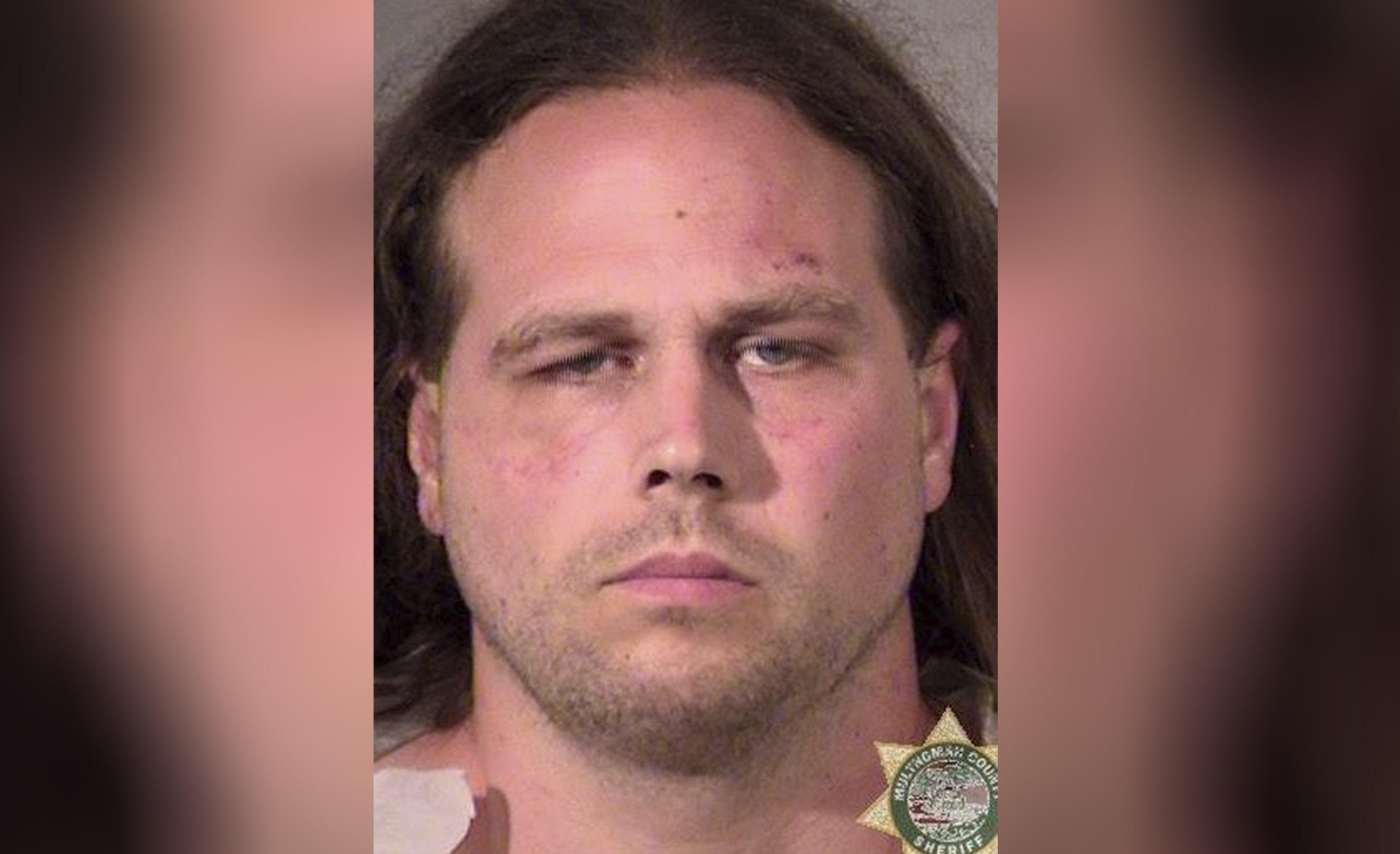 PORTLAND, Ore. -- Authorities on Saturday identified a 35-year-old Portland man as the suspect in the fatal stabbing of two people on a Northeast Portland light-rail train who yelled racial slurs at two young women, one of whom was wearing a hijab.

Jeremy Joseph Christian was being held Saturday in the Multnomah County Jail on suspicion of aggravated murder, attempted murder, intimidation and being a felon in possession of a weapon. He was arrested a short time after the attack on Friday.

He will make a first court appearance Tuesday, and it wasn't immediately clear if he had an attorney. A phone at his home in Portland rang unanswered early Saturday.

Police on Saturday identified the victims as 53-year-old Ricky John Best of Happy Valley, Oregon, and 23-year-old Taliesin Myrddin Namkai Meche of Portland. Best died at the scene, and Meche died at a hospital, police said.

Micah David-Cole Fletcher, 21, of Portland was also stabbed in the attack and is in serious condition at a Portland hospital, police said. His injuries are not believed to be life-threatening, police said.

Witnesses told CBS affiliate KOIN-TV the suspect was yelling about hating Muslims for several minutes before people confronted him and the encounter turned violent.

Police say that before the stabbing the assailant on the train was ranting on many topics, using "hate speech or biased language."

Friday was the beginning of Ramadan, the holiest time of the year for Muslims, and the attack prompted soul-searching in Portland, a city that prides itself on its tolerance and liberal views. A memorial of flowers and signs quickly grew at the scene by a transit station.

"There is too much hatred in our world right now, and far too much violence. Too much of it has arrived here in Portland," Mayor Ted Wheeler said in Facebook post.

Wheeler was on the inaugural direct flight from the Oregon city to London when the attack occurred. He said he boarded the first flight back and was due to arrive Saturday afternoon.

Dyjuana Hudson, a mother of one of the girls, told The Oregonian that the man began a racial tirade as soon as he spotted the girls. Her daughter is African-American and was with a friend who was wearing a hijab, she said.

"He was saying that Muslims should die," Hudson said. "That they've been killing Christians for years."

The attack happened on a Metropolitan Area Express train as it headed east. A train remained stopped on the tracks at a transit center which was closed while police investigated.

"In the midst of his ranting and raving, some people approached him and appeared to try to intervene with his behavior and some of the people that he was yelling at," police Sgt. Pete Simpson told The Oregonian. "They were attacked viciously."

Police Sgt. Pete Simpson told CBS News that Christian attended a free speech march in April with a baseball bat to confront protesters but the bat was quickly confiscated by officers.

The Portland Mercury, one of the city's alternative weeklies, posted an article with video clips of a man wearing a metal chain around his neck and draped in an American flag. "He ranted how he was a nihilist. He'd soon yelled racial slurs ... and gave the Nazi salute throughout the day," the Portland Mercury says.

Neighbors who live next to Christian's parents' house -- which was also his last listed address in court records -- said the family was quiet and they often saw Christian's two adult brothers but never him.

One neighbor, Kenny Jenkins, said he occasionally saw Christian riding his bike around the neighborhood.

The neighborhood where the Christians live is on the northern outskirts of Portland, an area that has been rapidly gentrifying in recent years because it remains one of the last affordable sections of the city. The homes immediately surrounding the Christian residence now hold biracial families moving from out-of-state and same-sex couples, Jenkins said.

Despite the changing neighborhood, the Christians have lived in their modest, two-story off-white house for decades, next-door neighbor Ron Killgore said.

"We would have a brief conversations. Every time they were out gardening, we would chat," Killgore said. "Just a few days ago I saw them out, doing something in the flower bed out front."

Portland Police Chief Mike Marshman told KOIN-TV that Friday's attacks were tough to comprehend. "Even though I've been doing police work for a long, long time now, the shock of these senseless crimes still stunned me," he said. "Just horrific."

But Christian has had several encounters with the law, and spent time in prison for robbery and kidnapping charges years ago, according to court records and a defense attorney.

In 2002, Christian, then 20, was arrested and charged with first-degree robbery and second-degree kidnapping after he rode to a convenience store on his bike and held up employees there with a gun, according to court records and his court-appointed defense attorney at the time, Matthew Kaplan.

When police caught up with him, Christian aimed the gun at himself in a suicide attempt before he was shot and injured by police, Kaplan said.

Christian was sentenced to more than seven years in prison after striking a plea deal that eliminated coercion and weapons charges.

Kaplan said he remembers the case vividly because Christian was so young, so earnest and had never been in trouble before. At the time, the attorney suspected the onset of mental illness to explain his actions and worried about how he would deal with a long prison sentence.

"It was so random, the event in his life. It made no sense that he did this at his age. He had no background like this, no history of violence and then he goes and gets a gun and robs a store," Kaplan told The Associated Press in a phone interview.

Christian had another brush with the law in 2010, when he was arrested on charges of being a felon in possession of a firearm and theft. Those charges were dismissed, according to court records, which do not explain why.