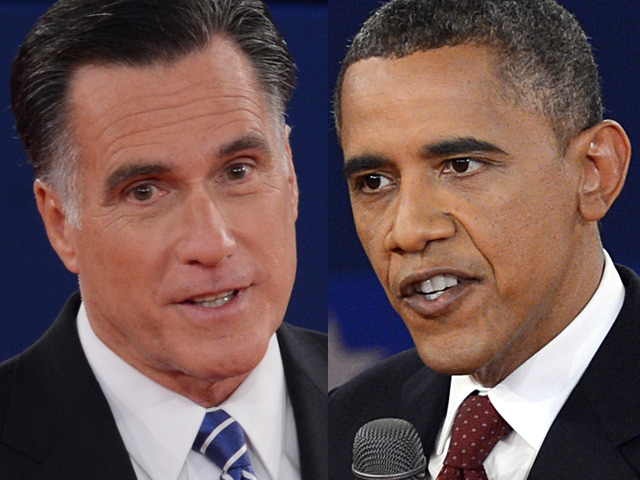 Fifteen days from Election Day, two national polls indicate that the presidential race is as close as ever, showing President Obama and Mitt Romney statistically tied. As both candidates head into their third and final debate with no clear lead, Monday night's debate could be a critical moment in the sprint to Election Day.

A new poll by George Washington University/Politico found that Romney leads the president by two points among likely voters, within the 3.1 percent margin of error. Romney garnered 49 percent support to Mr. Obama's 47 percent, which is an increase from the 46 percent the Republican candidate received in the same poll one week ago.

Another national poll released Sunday by Wall Street Journal/NBC News shows Romney and Mr. Obama are tied at 47 percent among likely voters. Among registered voters (not necessarily likely to vote), however, the president is ahead by five points.

One thousand registered voters and 816 likely voters were polled and the results have a 3.4 percent margin of error.

Gallup's Daily Tracking Poll shows Romney leading the president 51 percent to 45 percent, which is outside the 2 percent margin of error. The seven day average of likely voters shows Romney down one point from his high last week and most of the respondents have been asked after the second debate, which Mr. Obama was thought to have had a strong showing.

Fox News released several state-specific polls Monday. In Ohio, the president leads Romney 46 percent to 43 percent, within the three-point margin or error. In the same poll released a month ago, the president had a seven point lead in the crucial battleground state.

The enthusiasm gap continues in the Fox News poll, Romney leads the president by ten points among those "extremely" interested in the election. In addition, the poll shows a turnaround from last month, with more respondents giving Romney a favorable rating - 48 percent favorable to 46 percent unfavorable.

In Florida, the Fox News poll shows Romney with a lead, with Romney posting 48 percent support among likely voters compared to the president's 45 percent. The results are within the three-point margin of error of 1,130 likely Florida voters.

The poll shows improving signs for Romney in the Sunshine State as last month's poll showed Romney behind the president with 44 percent to Mr. Obama's 49 percent.

An increase of support among women is attributable to Romney's increase as the president's 19-point advantage among women voters in Florida has shrunk to just one point in the Fox News poll.

Another Florida poll shows the race a little tighter. A CNN poll released Monday shows Romney is supported by 49 percent of likely voters to the president's 48 percent, also within the margin of error.

The CNN poll also shows a decreasing gender gap as Romney is down by just two points.