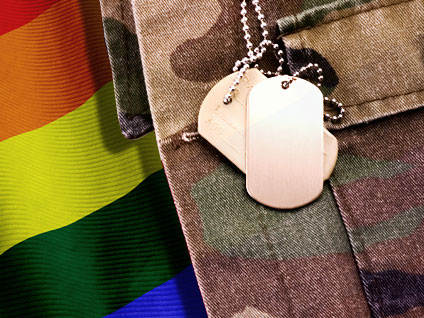 Sixty-nine percent of Americans believe gay men and women should be allowed to serve openly in the military, a new CBS News poll finds - an increase of seven points since October.

The poll comes as the Senate holds hearings on a Pentagon report that found little long-term risk to responsibly repealing the 1993 "Don't Ask, Don't Tell" policy that mandates that gays can only serve if they hide their sexuality.

On Friday, the Army and Marines Chiefs expressed concern about repealing the policy in testimony before Congress. Defense Secretary Robert Gates and Adm. Mike Mullen, the military's top uniformed officer who chairs the Joint Chiefs of Staff, have called for Congress to repeal the ban during this month's lame-duck session. Gates has warned that not doing so amounts to rolling the dice on a court-mandated repeal that would not give military leaders the time they need to effectively implement new policy.

The poll found that 53 percent of Americans "strongly" favor allowing gay men and women to serve openly, in addition to the remaining 16 percent who say they "favor not so strongly."

Two in three Democrats and a majority of independents strongly favor changing the policy, along with 32 percent of Republicans.

Fifteen percent of Americans say they strongly oppose allowing gays to serve openly, including 30 percent of Republicans and roughly one in ten Democrats and independents. Another eight percent oppose changing the policy, though not strongly.

On Friday, Republican Sen. Scott Brown of Massachusetts released a statement reading in part, "I accept the findings of the [Pentagon] report and support repeal based on the Secretary's recommendations that repeal will be implemented only when the battle effectiveness of the forces is assured and proper preparations have been completed."

Brown is among the handful of Republican senators who say they are willing to side with Democrats to get to the 60 votes necessary to break a GOP-led filibuster. (A repeal measure has already passed the House.) It's not as simple as simply bringing the matter to a vote, however, since Republicans want a full amendment process before casting their votes - something that could take as long as two weeks. Because there is little time left in the lame duck session and Democrats are trying to pass a number of bills before the holiday recess, the prospects for passage of repeal remain unclear.