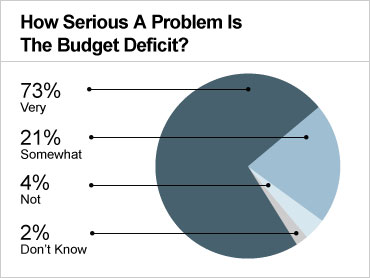 Washington is putting new emphasis on reducing the deficit, and a new CBS News poll suggests most Americans approve.

Just this week, President Obama's bipartisan deficit commission released a comprehensive yet controversial plan to reduce the deficit by about $4 trillion over 10 years. The plan failed to garner the 14 votes needed from the 18-member commission in order to assure that Congress will consider the plan. However, the commission's leaders said they were satisfied that they brought awareness to the issue of the deficit.

Concern about the deficit crosses party lines. Eighty-five percent of Republicans say it is a very serious problem, as do 64 percent of Democrats and 74 percent of independents.

With the deficit looming, Americans continue to hold grim views of the current economy. This poll was conducted prior to today's release of the latest new unemployment figures, which come close to 10 percent.

About eight in 10 say the nation's economy is in bad shape, a figure that has held fairly steady over the last two years.

However, Americans are more optimistic about the country's economic outlook than they have been for months. Thirty-one percent say the economy is getting better, the highest number since April. Twenty-four percent think it's getting worse and 44 percent say it is staying the same.

While some Americans see better economic times on the horizon, Mr. Obama still receives criticism on the issue. Nearly half say the president has spent too little time trying to create jobs and fix the economy; 37 percent think he has spent the right amount of time on the issue.

The president is also seen as having done too little for small businesses - 64 percent of Americans express that view. Only a quarter says he has done the right amount. At the same time, four in 10 think Mr. Obama has done too much for large corporations.

The increase in optimism about the economy may have helped the president a bit; his approval rating on handling the economy is up slightly from last month and about where it was in October. Forty-three percent now approve, up from 40 percent in November. Still, 50 percent disapprove.

Mr. Obama's overall job approval rating is also up slightly from last month. Forty-eight percent now approve of the job he is doing, while 42 percent disapprove. Approval among independents has risen as well, from 40 percent last month to 45 percent now.

Most Americans still disapprove of the job Congress is doing; just 17 percent approve.