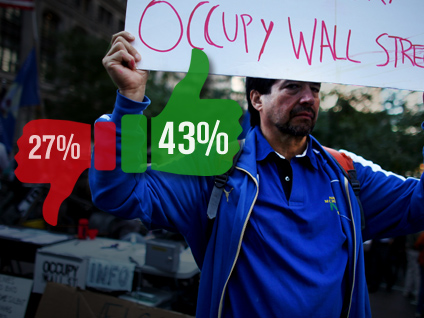 Forty-three percent of Americans agree with the views of the "Occupy Wall Street" movement, according to a new CBS News/New York Times poll that found a widespread belief that money and wealth should be distributed more evenly in America.

Twenty-seven percent of Americans said they disagree with the movement, which began more than a month ago in lower Manhattan and has since spread across the country and around the world. Thirty percent said they were unsure.

Seven in ten Americans say they have heard or read at least something about "Occupy Wall Street."

While there are different agendas within the "Occupy Wall Street" movement, nearly all of the protesters say that wealth has become too concentrated among a relatively small group of Americans. The poll found that most Americans agree with that assessment: Two in three say that wealth is not distributed as equitably as it should be, while just one in four says wealth is distributed fairly.

Poll: Americans say no one has good jobs plan

This poll was conducted among a random sample of 1,650 adults nationwide, interviewed by telephone October 19-24, 2011. Phone numbers were dialed from random digit dial samples of both standard land-line and cell phones. The error due to sampling for results based on the entire sample could be plus or minus three percentage points. The error for subgroups is higher. An oversample was conducted for this survey which will be analyzed in a future poll release.