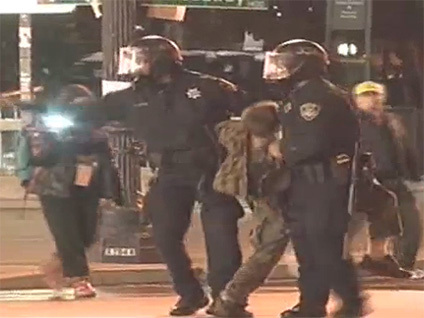 OAKLAND, Calif. - Oakland police say they arrested 75 people while clearing an anti-Wall Street protest in front of City Hall that had grown into an encampment with dozens of tents.

Most of the people arrested were taken into custody on suspicion of misdemeanor illegal lodging, as police raided the encampment around 5 a.m. Tuesday.

Interim Oakland Police Chief Howard Jordan said at a news conference later in the morning that hundreds of officers and sheriff's deputies from more than 12 agencies moved in on about 170 protesters.

He said police fired beanbag rounds and tear gas, but no one was injured. Television news footage showed protesters being taken away in plastic cuffs without incident, although an officer did fire a non-lethal projectile from a shotgun at a protester who lobbed a bottle, authorities told the San Francisco Chronicle.

One of those arrested, Aiyahnna Johnson, 30, of Oakland, had been living at the camp with her 2-year-old daughter. "We want the best for you guys, that's all," she was quoted by the San Francisco Chronicle telling two officers who were leading her away.

CBS station KPIX San Francisco reported that city officials told people early in the morning who work in downtown Oakland to hold up the beginning of the workday "until further notice."

The police action began around 4:40 a.m. when an officer on a loud speaker told the protesters they were illegally blocking the plaza and were subject to arrest, according to the Chronicle. The newspaper reported that several hundred people appeared ready to defend the camp about an hour before police moved in, placing Dumpsters, boards, pallets and even metal police-style barricades around the plaza.

The camp site had grown to more than 150 tents and included health, child-care and kitchen areas.

Anthony Owens, 40, of Oakland, said some people in the camp left as word spread about possible police action. A core group of about 150 people locked arms and shouted as officers moved in from four corners, Owens said.

Witnesses reported seeing smoke rising from the area. The plaza was "contained" around 5:30 a.m., according to city officials, although tents and trash remained strewn there. It was not immediately clear how many people were arrested.

A police spokeswoman did not return a message from The Associated Press.

Police maintained a heavy presence around downtown Oakland into the morning. Streets were closed off by police barricades, and at least two helicopters were in the air shining lights down. Dozens of officers were in the streets.

A small group of people near the plaza were seen dragging police barricades into the street as police stood nearby.

City officials had originally been supportive of the protesters, with Oakland Mayor Jean Quan saying that sometimes "democracy is messy."

But the city later warned the protesters that they were breaking the law and could not stay in the encampment overnight. They cited concerns about rats, fire hazards, public urination and acts of violence at the site.

"Many Oaklanders support the goals of the national Occupy Wall Street movement," Mayor Jean Quan said in a statement on Tuesday. "However, over the last week it was apparent that neither the demonstrators nor the City could maintain safe or sanitary conditions or control the ongoing vandalism."

There were reports of a sex assault and a severe beating and fire and paramedics were denied access to the camp, according to city officials, who said they had also received numerous complaints of intimidating and threatening behavior.

Protesters disputed the city's claims about conditions at the camp. They said the protest was dominated by a spirit of cooperation that helped keep the site clean and allowed disputes to be resolved peacefully.

Lauren Richardson, a 24-year-old college student from Oakland, complained that the disheveled state of the camp following the police raid gave a false impression. She said volunteers collected garbage and recycling every six hours, that water was boiled before being used to wash dishes and that rats had infested the park long before the camp went up.

Police also cleared a smaller encampment from a park near the plaza on Tuesday morning.

The city said protesters would be allowed to return to the plaza after it was cleaned up and could stay between the hours of 6 a.m. and 10 p.m. but not overnight.

Many protesters said the raid had only served to strengthen their resolve that the protests would continue. A flier handed out along the police barricades at the edge of the plaza Tuesday morning asked Occupy Oakland demonstrators to reconvene at the city's public library in the afternoon.

Online: For arrested Occupiers, there's an app for that.

Occupy Wall Street protesters now have access to a free app to alert others if they're about to be hauled off. Users simply write a text message in advance and program a list of recipients. As they're about to be arrested, users can hit one button and alert everyone on their list.

The "I'm Getting Arrested" app (available at Android Market) was developed by Jason Van Anden, a Brooklyn software developer. He is working to make it available on iPhone.

The Daily News reports that as of Monday morning, 9,000 people had installed it. Van Anden says he doesn't know if anyone used it because he installed privacy controls.

Dallas: Dozens of Occupy Dallas protesters were arrested Monday afternoon, after blocking the entrance to a bank. Officers sealed off downtown streets, brought in transport vans, and forcibly removed about 20 protestors who sat locking arms in front of the Chase Bank on Main and Akard.

Some of those arrested refused to cooperate; officers and protesters wrestled on the ground before those arrested were carried or dragged to jail. CBS Station KTVT reports the violent encounter only enflamed other protesters, who chanted insults to officers during the incident.

Reed said Monday he has no timeline for when he plans to revoke an order allowing the protesters to stay at Woodruff Park until Nov. 7. He said he will wait until clergy members have had time to meet with the demonstrators about the removal.

Reed was upset over an advertised hip-hop concert that he said drew 600 people to the park over the weekend but didn't have a permit and didn't have security guards to work the crowd. He called the concert "the height of irresponsibility."

The protesters have been there for two weeks. Organizers said the mayor is trying to "end our attempt to shine a light" on society's problems.

New York: A Long Island couple has filed to trademark the Occupy Wall Street movement's name, to capitalize on what they said was its potential as a "global brand." In a U.S. Patent and Trademark Office (USPTO) application dated Oct. 18, Robert and Diane Maresca sought to trademark the phrase "Occupy Wall St." for use on bumper stickers, hobo bags, gym bags, back packs, carry-ons, umbrellas, clothing and footwear.

In a news release issued Saturday, the group refers to the Federal Reserve protests as the "first additional front" for Occupy SLC, which has established a camp in Salt Lake City's Pioneer Park.

San Francisco: A diverse array of Bay Area clergy members were among dozens of protesters marching through downtown San Francisco Monday in support of the "Occupy SF" movement. About 200 marchers left Justin Herman Plaza Monday morning and snaked through targeted spots in the city's Financial District, including the Federal Reserve Building and several banks.

They chanted "We are the 99 percent" and gave speeches. One group of marchers dressed in suits carried a golden calf illustrating a biblical verse from the Book of Exodus with a sign saying "Fiscal Idolatry."

Religious leaders from all faiths said they were hoping to change some perspectives about the protesters. The Rev. Donna Allen of the New Revelation Community Church in Oakland said the clergy were also hoping the march would get the attention of elected officials.

No arrests were reported.

Boston: Two people who had been living in the Occupy Boston tent city have been arrested for allegedly selling heroin to an undercover police officer.

Issac Bell and Charlene Dumont were both released on personal recognizance after pleading not guilty to drug possession and distribution charges at their arraignments Monday. They were also ordered to stay away from the Occupy Boston encampment.

Prosecutors say police set up a sting after learning of drug activity in the encampment. An undercover officer arranged to buy drugs from a man known as "Shorty," later identified as Bell.

Authorities say the officer bought $80 worth of a substance believed to be heroin last Thursday from the 34-year-old Bell in the bathroom of South Station, near the encampment.