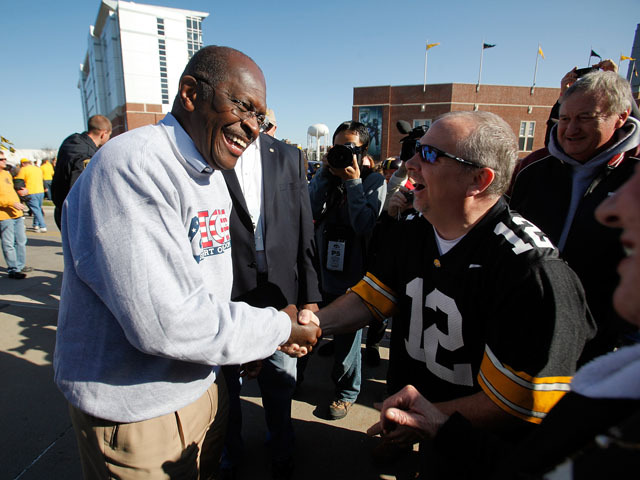 In early October, the two men were tied at 17 percent.

The poll was conducted Oct 19-24 among 1,650 adults. 1,475 interviews were conducted among registered voters and 455 voters who said they plan to vote in a Republican primary. The margin of error among primary voters is plus or minus four percentage points.

Cain's support surged among voters who identified with the conservative Tea Party wing of the Republican party, rising to 32 percent in mid-October from 18 percent just a few weeks ago. That's more than four times the level of support he had from the group in mid-September.

Perry, however, has seen his Tea Party backing go up in steam. He had just 7 percent support in the latest poll, compared to 12 percent in early October and a staggering 30 percent in mid-September.

Minnesota Rep. Michele Bachmann, former Pennsylvania Sen. Rick Santorum and former Utah Gov. Jon Huntsman were at the back of the pack, with 2 percent, 1 percent and 1 percent respectively.

The race is still open, as voters are not firm in their support of any of the candidates. About four of five voters said it is too early to say for sure who they support for the nomination, with just 19 percent saying their minds are already made up. That's about the same as it was at this point in 2007.

Americans are getting interested in the 2012 race for president. About 70 percent of registered voters nationwide are paying at least some attention to the 2012 election campaign, including 31 percent who said they are paying a lot of attention.

Republicans, of course, are paying closer attention to the campaign. About 78 percent said they were following the campaign closely, compared to about 68 percent of Democrats.

Thirty-two percent of Republican primary voters say they would enthusiastically back Cain if he became the party's nominee, while 30 percent would have reservations about him. Fewer Republican voters would enthusiastically support Romney (18 percent) or Perry (14 percent), and more say they would have reservations about each of them (42 percent for Romney and 40 percent for Perry).

This poll was conducted by telephone from October 19-24, 2011 among 1,650 adults nationwide. 1,475 interviews were conducted with registered voters and 455 with voters who said they plan to vote in a Republican primary. Phone numbers were dialed from samples of both standard land-line and cell phones. The error due to sampling for results based on the entire sample could be plus or minus two percentage points. The margin of error for the sample of registered voters could be plus or minus three points and four points for the sample of Republican primary voters. The error for subgroups may be higher. An oversample was conducted for this survey which will be analyzed in a future poll release. This poll release conforms to the Standards of Disclosure of the National Council on Public Polls.