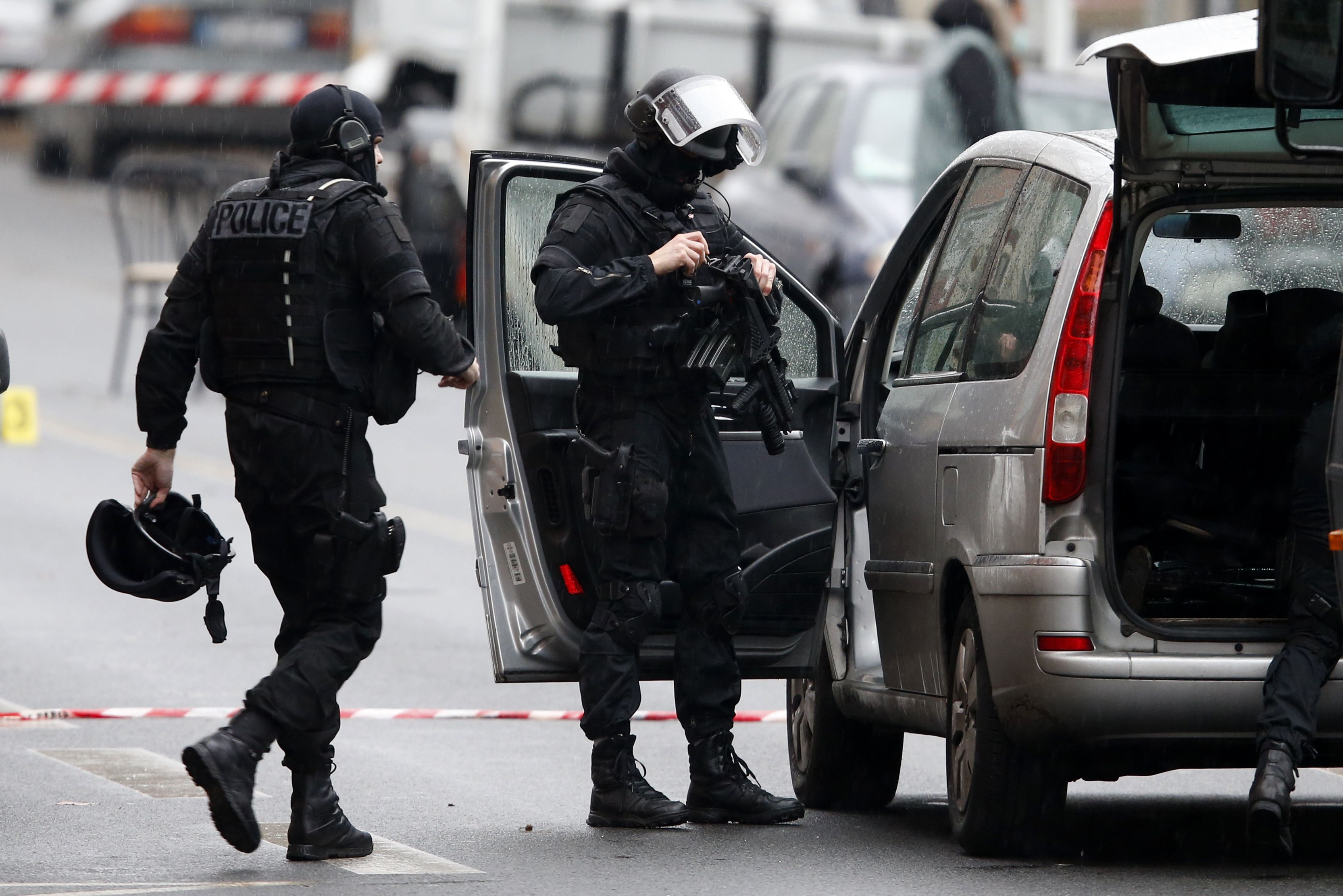 PARIS -- Frightened yet defiant, French residents held a day of mourning Thursday for 12 people slain at a Paris newspaper. French police hunted for the two heavily armed brothers suspected in the massacre, fearing they might strike again.

The two suspects - one a former pizza deliveryman who had a prior terror conviction and a fondness for rap -should be considered "armed and dangerous," French police said in a bulletin.

Ninety people have been questioned so far in the investigation and nine people close to the two suspects - Cherif Kouachi, 32, and his 34-year-old brother Said Kouachi - were detained for further questioning, officials said.

U.S. officials tells CBS News that both brothers were on the U.S. "No Fly" list. They were also on a broader terror watch list.

According to the Interior Ministry, 88,000 security forces have been deployed in the manhunt, including 50,000 policemen.

Police were also seen searching homes in the village of Corcy, near the town of Longpont, further to the east but in the same region as Crepy-en-Valois. Most of the police activity reported Thursday was along or near to a highway running northeast from central Paris, the N2.

An official at the town's City Hall told CBS News that for about an hour on Thursday she heard police sirens and saw helicopters flying overhead, but that everything had gone quiet since. Photos from the town showed a large police presence.

French President Francois Hollande - joined by residents, tourists and Muslim leaders - called for tolerance after the country's worst terrorist attack in decades. At noon, the Paris metro came to a standstill and a crowd fell silent near Notre Dame cathedral to honor Wednesday's victims.

"France has been struck directly in the heart of its capital, in a place where the spirit of liberty - and thus of resistance - breathed freely," Hollande said.

The satirical newspaper Charlie Hebdo had caricatured the Prophet Muhammad and witnesses said the attackers claimed allegiance to al Qaeda in Yemen. Around the world, from Berlin to Bangkok, thousands filled squares and streets, holding up pens to defend freedom of speech and honor those killed in the massacre.

"The only thing we can do is to live fearlessly," wrote Kai Diekmann, editor in chief of Bild, Germany's biggest-selling daily. "Our colleagues in Paris have paid the ultimate price for freedom. We bow before them."

Eight journalists, two police officers, a maintenance worker and a visitor were killed in Wednesday's newspaper attack and 11 people were wounded, four of them critically. The publication had long drawn threats for its depictions of Islam, although it also satirized other religions and political figures.

By Thursday afternoon, authorities focused their search around the towns Villers-Cotterets and Crepy-en-Valois northeast of Paris, according to an official with the national gendarme service. Police confirmed to CBS News that personnel had established checks at all major highway entry points into the capital city.

Two men resembling the suspects robbed a gas station in Villers-Cotterets early Thursday, and police swarmed the site while helicopters hovered above. Later large numbers of special police units arrived in Crepy-en-Valois amid reports the suspects had holed up there. However, the gendarme official later said the men had not yet been located.

A third suspect, Mourad Hamyd, 18, surrendered at a police station after hearing his name linked to the attacks, a Paris prosecutor's spokeswoman said. A senior U.S. intelligence source told CBS News that Mourad is the brother-in-law of the two brothers. The Kouachis are believed to have been connected to al Qaeda in Iraq (which later became ISIS) and have current links in Yemen, where one of them visited in 2011.

CBS News' Clarissa Ward reports among those being held were Mourad, Said Kouachi's wife, sister and his sister's husband.

Al Qaeda in the Arabian Peninsula (AQAP), the branch of the terror network considered to represent the most immediate threat to the U.S. and other Western nations, is based in Yemen. A witness to the attack on Wednesday said one of the men claimed to be acting on behalf of "al Qaeda in Yemen" during the shooting.

The governor of a southern province in Yemen told The Associated Press on Thursday that four French citizens had been deported from Yemen in the last four months. Gov. Ahmed Abdullah al-Majidi said he didn't have their names and there was no confirmed link between those deportations and the Charlie Hebdo attack.

Two explosions hit near mosques in France early Thursday, raising fears the deadly attack at Charlie Hebdo was igniting a backlash against France's large and diverse Muslim community. No one was injured in the attacks, one in Le Mans southwest of Paris and another in Villefranche-sur-Saone, near Lyon, southeast of the capital.

France's top security official, meanwhile, abandoned a top-level meeting to rush to a shooting on the city's southern edge that killed a policewoman. The shooter remained at large. Cazeneuve said no links were established to the newspaper killings at this stage.

Fears have run high in Europe that jihadis trained in warfare abroad would stage attacks at home. The French suspect in a deadly 2014 attack on a Jewish museum in Belgium had returned from fighting with extremists in Syria; and the man who rampaged in southern France in 2012, killing three soldiers and four people at a Jewish school in Toulouse, received paramilitary training in Pakistan.

Both al Qaeda and ISIS have repeatedly threatened to attack France, which is conducting airstrikes against extremists in Iraq and fighting Islamic militants in Africa.

Charlie Hebdo editor Stephane Charbonnier, one of those slain, was specifically threatened in a 2013 edition of the al Qaeda magazine Inspire. A caricature of Islamic State's leader was the last tweet sent out by the satirical newspaper, minutes before the attack. Its feed has since gone silent.

One witness to Wednesday's attack said the gunmen were so methodical he at first mistook them for an elite anti-terrorism squad. Then they fired on a police officer. Once inside the building, the gunmen headed straight for Charbonnier, killing him and his police bodyguard first. Shouting "Allahu akbar!" as they fired, the killers then called out the names of other employees.

In Tunisia, the birthplace of one of the slain cartoonists, Georges Wolinski, dozens paid homage in a candlelight vigil outside the French ambassador's residence.

"These people were executed at point-blank range just because of drawings - drawings that didn't please everyone and provoked anger and controversy but still were just drawings," said journalist Marouen Achouri.

Meanwhile, Patrick Pelloux, a writer for the satirical magazine, said Charlie Hebdo would publish a new edition on Jan. 14.

CBS News has learned that in the aftermath of the attack on Charlie Hebdo, Attorney General Eric Holder will travel to Paris to attend an International Ministerial meeting on January 11, convened by the French Minister of Interior. The meetings will include discussions on addressing terrorist threats, foreign fighters and countering violent extremism.