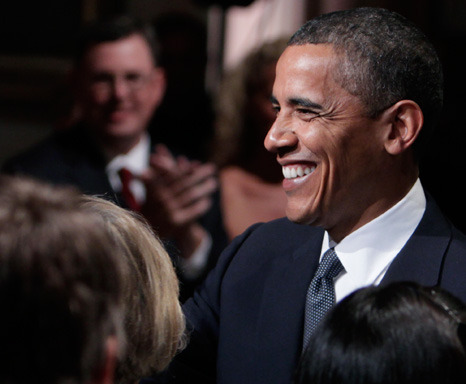 LAS VEGAS -- President Obama was happier on the evening health care reform finally passed out of Congress than on the night he won the presidential election, House Speaker Nancy Pelosi told liberals at the Netroots Nation conference.

After the president relayed those sentiments to her, Pelosi said she told him, "If you weren't elected president of the United States, we wouldn't have gotten the job done."

The liberal bloggers at Netroots also played a critical role in passing the major reform package, she said - "although we had some differences of opinion."

The health care bill tops the list of issues that have left liberals conflicted about the Obama administration. Its passage was bittersweet for many liberals who were disappointed to see a "public option" for health insurance left out.

The only administration official to attend the Netroots conference in person was Transportation Secretary Ray LaHood - incidentally, one of the two Republicans in Mr. Obama's cabinet. Yet the president addressed the conference himself in a video presentation this morning.

"Change hasn't come fast enough for too many Americans," he said, acknowledging that it also has come too slow "for many of you who fought so hard during the election."

He insisted in the video, however, that his accomplishments so far have been significant. To make that point, the video featured MSNBC television host Rachel Maddow -- one of the left's favorite media personalities -- rattling through the president's accomplishments.

"The last time a president did this much in office, booze was illegal," Maddow says.

Mr. Obama told the liberal conference goers "to keep holding me accountable, to keep up the fight."

"Change doesn't come from the top down," he said. "It comes from the bottom up, from the Netroots."