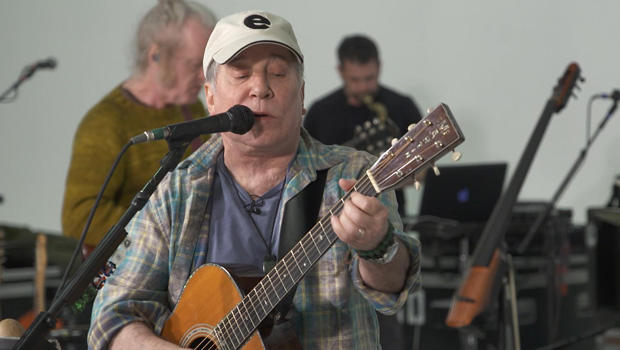 Paul Simon released his 13th solo album to nearly unanimous acclaim this past summer. Now he’s on a big European tour, at a time most musicians his age would be content playing their greatest hits in venues a little closer to home. Here’s Lee Cowan:

To watch Paul Simon rehearse is to watch a big band leader in action. He has some of the best musicians in the world at his fingertips, and when it’s time to play, they create a sound that is uniquely his.

He jokes that his music contains more and more elements from “this big bag of sounds that I’ve been collecting.”

Sounds (and not just the silent ones) have always spoken to Paul Simon. He has shelves full of exotic instruments, like Vietnamese finger bells, in the studio at his home in the Connecticut countryside -- each one of them, an auditory muse.

He says he always called a one-stringed instrument “a ‘twanger.’ Turns out it’s from, I think, India and it’s called a gopichand.”

And yes, it “twangs.”  You’ll hear it very clearly on the first song off Simon’s 13th solo album, “Stranger to Stranger,” titled “The Werewolf.” “So when I heard it sounded like, The Werewolf is coming, so that’s where I took the title from.”

At 75 his voice is as strong as ever, and with it comes lyrics only “Rhymin’ Simon” could deliver:

The fact is most obits are mixed reviews
Life is a lottery
A lot of people lose
And the winners, the grinners
With money-colored eyes
Eat all the nuggets
Then they order extra fries

Cowan asked, “At a time when you could be playing your greatest hits, you could be not worried about sort of exploring new things, and yet you still are kind of trying to push the envelope.”

“I’m not trying to push an envelope,” Simon replied. “I have no agenda other than to follow what my ear tells me is interesting.”

“It’s very much trial and error. And I’ve learned to have a lot of patience with the errors. And a lot of errors!” Simon laughed.

Hello darkness, my old friend,
I’ve come to talk with you again
Because a vision softly creeping,
left its seeds while I was sleeping
And the vision that was planted in my brain, still remains
Within the sound of silence

He’s been at this songwriting business a long time -- since he was 13, teaming up with his childhood friend Art Garfunkel.

As a team they wrote anthems for a generation, with lyrics that seemed wise beyond their years.

“For a while there I had my finger out, and the pulse of popular music ran under my finger, and everything I touched became a hit,” Simon said.

I am just a poor boy
Though my story’s seldom told
I have squandered my resistance
For a pocketful of mumbles
Such are promises
All lies and jest
Still, a man hears what he wants to hear
And disregards the rest

“Sometimes you get into that flow where you feel like you’re plugged in, and stuff is just coming through you.”

“Does one ever arrive in a flash for you?” Cowan asked.

“Occasionally. The fastest song that I can remember ever writing ... was ‘Slip Slidin’ Away,’ which I wrote in about 20 minutes or a half an hour. And the same is true with ‘Bridge Over Troubled Water.’  I wrote it in a night. And when I finished it I thought, ‘Where’d that come from? That’s better than I usually write!’”

“Bridge Over Troubled Water” was Simon & Garfunkel’s last album together. Their often-rocky collaboration ended in 1970.

“I don’t spend a lot of time thinking about Simon & Garfunkel. But given the span of years of my career, it’s a relatively small proportion.”

“You know, nothing feels like ancient history. It’s one of the clichés of getting older: you remember everything as if it just happened.”

How could he forget their massive reunion in Central Park back in 1981? Half a million people crammed onto the lawn that night to see the duo together again. “It was a totally peaceful scene and it sort of spread through the city like that,” Simon said. “There was something quite extraordinary about it.”

Art Garfunkel, however, wasn’t so sure. Simon recalled, “When we came off stage, and I said to Artie, ‘How do you think we did?’ And he said, ‘Disaster.’  Yeah, it was like a giant hit!”

They were a hit. And so were Simon’s solo songs -- he had plenty after the breakup, enough to bring an even bigger crowd back to Central Park in 1991.

But nothing was quite as popular, or quite as different, as his South African-influenced “Graceland.”

“I never really heard boundaries between music,” Simon said. “To me it really didn’t matter where the stuff came from. It all sounded to me like something that I liked, and therefore was popular music.”

“It was the biggest learning experience of my musical life, no question about it,” he said.

Being a father has been his other learning experience. He has four children, and he married a musician, Edie Brickell, who has a successful career of her own.

He continues his musical exploration, pushing himself and his band to play each song -- old or new -- as if for the very first time.

His latest album, “Stranger to Stranger,” debuted at No. 1 on the Billboard charts this summer -- that’s historic even for him.

To watch Paul Simon perform “Wristband” from the album “Stranger to Stranger” click on the video player below.

It’s proof perhaps that any talk of his retirement is just that: talk.

That’s not to say, though, he’s not thinking about the future, and for Paul Simon those thoughts (it probably won’t surprise you) are often poetic.

“What I’m thinking of is, how to end things well, not just a career but the whole thing, the whole life, you know?” he said. “And if I could do it gracefully or beautifully, well, I would be very grateful.”

“But it doesn’t sound like you’re dwelling on it.”

“It’s not my favorite go-to subject, you know, when I want to tear myself up! But on the other hand, it’s probably worth it to be at least somewhat prepared for how to end well -- how to end the song well, how to end a career well, how to end everything well.”