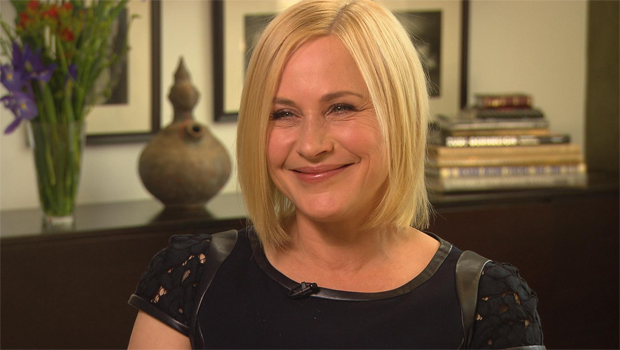 Patricia Arquette is an Oscar nominee for her role in the movie "Boyhood." So will it be her name we hear when they ask for "The envelope, please..."? Lord knows it's taken a long time to get there, as she explains to Mo Rocca:

As she walks the red carpet this award season, Patricia Arquette is completing a journey a dozen years in the making -- one that all began with a phone call from director Richard Linklater.

Linklater's pitch was an audacious one: a movie called "Boyhood," a story about a family that would be filmed over 12 years ... a fictional tale told in real time.

In its portrayal of a struggling single mom, the movie is as much about her growth as it is about the kids'. Arquette and Ethan Hawke, who plays her ex-husband, are both nominated for Oscars.

Her child co-stars are first-time actors Ellar Coltrane and Lorelei Linklater, the daughter of the director.

Arquette bonded with her young co-stars through her director's collaborative way of working: "He introduced me to the kids. He moved out of his house. I had the kids alone all weekend. I tucked them in bed. I read them stories, made them breakfast."

"It was such a long commitment - at some point, did you go, 'Oh, my God, if this thing craters, I will have spent nine, 10 years of my life on this'?" asked Rocca.

"I think it was, like, six or seven years [in], we were like, 'Yeah, this would really suck if this just falls apart!'" she laughed.

When asked if she had any anxiety about a movie in which an audience sees her age 12 years," Arquette replied, "No, I was excited about that. When Rick first told me about it, I knew the kids would grow up really fast, and then I knew Ethan and I would get old really fast. I wanted to move into this next phase of my career, and I wanted to leave all of that behind."

"That" was a string of roles playing the ingénue -- not that Arquette was ever run-of-the-mill. She played a scream queen in "Nightmare on Elm Street 3." And she broke through in the '1993 cult classic "True Romance," playing the sexy survivor Alabama Whitman.

Arquette took all kinds of parts because, well, she had to. She was a young mother who had her son, Enzo, when she was 20.

"How did it affect your life as an actor?" asked Rocca.

"I don't think I would be a successful actor if I hadn't been a young mom," she said. "I don't think you can just think, Let me be precious with my career. I can't do that! You have to do what you have to do to support your kids."

Arquette comes from a long line of actors who know what it takes to put food on the table. Her great-grandparents were in vaudeville, and her grandfather, Cliff, was a comedy star on the small screen.

"He was a real Civil War buff, and he was one of the first people that saw the importance of recognizing battlefields," said Arquette. He even opened his own Civil War museum at Gettysburg.

"I was actually conceived on the Gettysburg battlefield!" said Arquette.

"Bury the lead!" said Mo. "Gosh, on the Union or the Confederate side?"

"Oh, Union. We were Union people. My parents were visiting him, and that's how I came into the world."

Her parents, now deceased, were more counter-cultural. When she was a child, the family lived for a time on a commune in Virginia.

"It's not really the way people conceptualize a hippie commune," said Patricia. "It wasn't a free-love place. Most people were married."

But they became disenchanted when they found out it wasn't so Uptopian.

"You find out, 'Oh, I tried to get away from all that, but you're greedy, and you're lazy, and you're a perv, and there's a weirdo, and a drunk' -- the same thing you just left, you just made again in a microcosm."

Her late father, Lewis Arquette, was a journeyman actor who took work where he could find it.

"I'd say the earliest picture, for me, of the life of an actor was my father being gone. He had to work really hard to support us. He would do industrial films, commercials."

"So for you, being an actor didn't mean getting rich?" asked Mo.

"Not at all. Actually, it was a real struggle to be an actor."

That makes Patricia a fourth-generation actor, along with all of her siblings: Richmond, David, Alexis, and Rosanna.

Pop culture lore pegs her as the inspiration for the '80s hit "Rosanna" by Toto.

"That song is written about her. But he pronounces her name wrong!" Patricia laughed. "I know, it's strange."

Rosanna encouraged her sister from the beginning. "She paid for my first acting classes," said Patricia. "She said, 'There's always room for another rose in the garden.'"

Still, Patricia entered the family profession knowing that in show business, talent is no guarantee of success.

Rocca asked, "Do you think that, out there, there are Meryl Streeps and Marlon Brandos who just never got cast?"

"I do," Arquette said. "I think there's a lot of really talented people that don't have the right timing or the right moment or the right luck. My dad was very talented. When he was young, a lot of people thought that he was going to be James Dean, basically. And it didn't happen for my dad like that.

"And I remember talking to my dad later in life. I was like, 'Dad, you know what really makes me sad is I don't think you saw your life as successful. You raised five kids. You fed five kids as an artist. We got to go to Europe. Okay, it was backpacking. Who cares? We got to see the world. You were successful.'"

For the 46-year-old Arquette, success has meant raising two kids and finding work in films and on television.

When she began the TV series "Medium," Arquette recalled, "they said, 'You're in the movies. You do art movies, why are you doing TV?' And I just thought it was so snotty, that concept that you couldn't do good entertainment on television, and I disagree with that."

Arquette's newest project: "CSI: Cyber," which will air on CBS. And she's already cleaning up on the awards circuit for "Boyhood."

"What do you think your parents would think of all the hoopla that surrounds this nomination?"

"I think it would really blow their minds," she replied. "I feel them so much around me a lot in this. And I definitely felt my mom a lot in making this. Just coming from so many generations of actors, to be in this position, it's amazing."