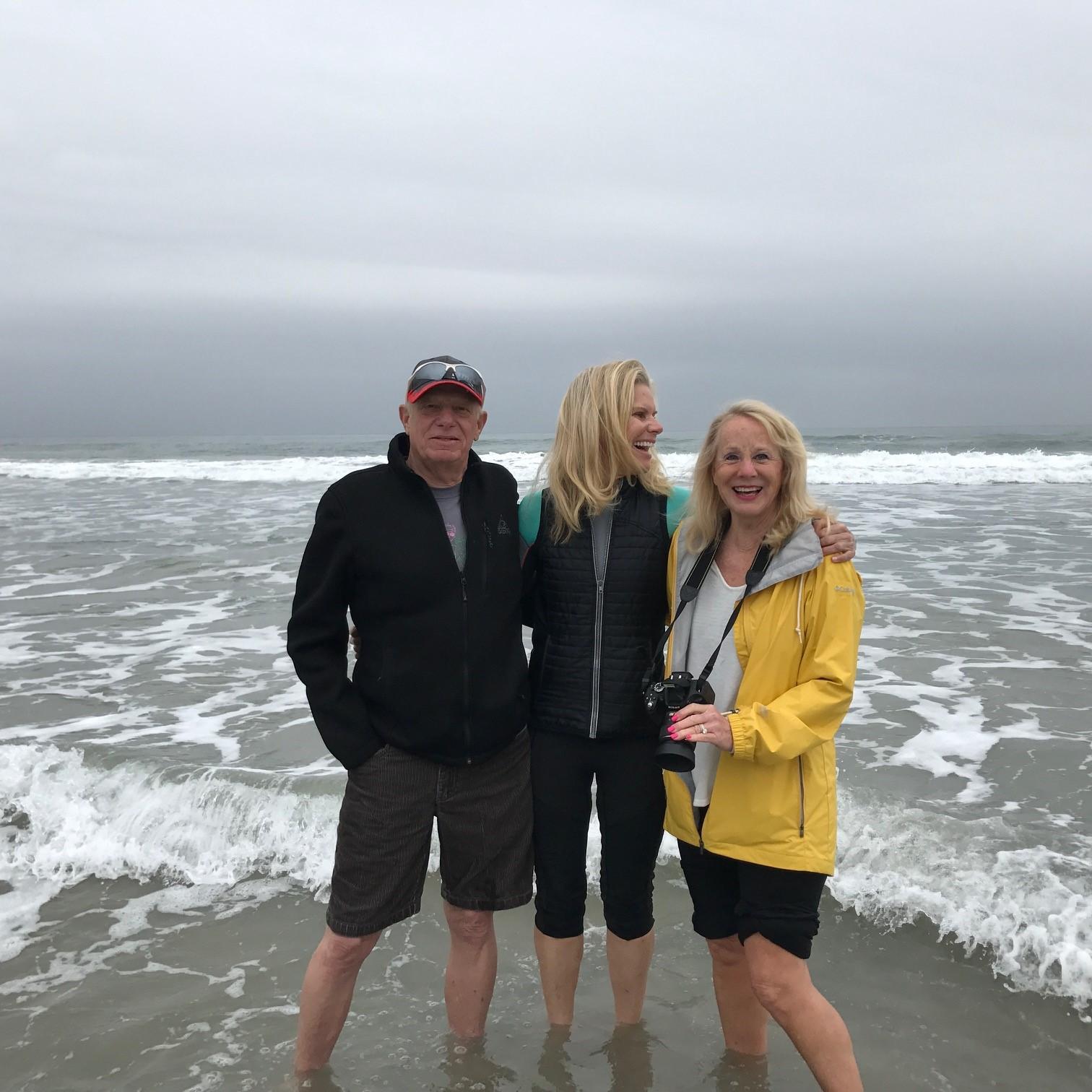 Mike Levine said he felt fine in June 2015, when he was first diagnosed with pancreatic cancer.

The lifelong athlete and retired aerospace industry salesman from Carlsbad, California, told CBS News, "I had a couple of unusual symptoms I hadn't previously noticed, so I went to see my doctor."

His urine was a little darker than normal and his stool was slightly discolored — chalky-colored and oily. A routine urine test came back normal but a blood test for liver function was elevated. His doctor still wasn't worried.

"He said it could be a number of things," said Levine  possibly gallstones or hepatitis.

But then an MRI revealed a mass and a scope test and biopsy confirmed pancreatic cancer. It threw Levine and his wife for a loop.

"I am an athlete. I've done the Ironman Triathlon in Hawaii twice. I was a 1994 All-American triathlete. I've done over 100 triathlons. I was in good health other than those two annoying things when I went to the bathroom, and then all the scans came back positive for cancer," he said.

Now, two years later, Levine is one of a small percentage of people who's survived pancreatic cancer. Only about 8 percent of patients live five years after diagnosis — the lowest five-year survival rate of any major cancer.

Pancreatic cancer has a low profile compared to other cancers, but it's the third leading cause of cancer-related death in the United States, killing more people than breast cancer, according to the American Cancer Society. Rates are rising faster than any other cancer in the country.

Why is pancreatic cancer so deadly? For one thing, it has no early screening test — nothing like the mammogram for catching breast cancer or the colonoscopy or stool test or detecting colon cancer. And there is no cure. The very nature of it makes it difficult to study, say experts.

Unlike breast cancer, for example, with its highly publicized fundraising events and awareness campaigns, there aren't a lot of pancreatic cancer survivors who can advocate for it, either, because so many die within a short time after diagnosis. The speed at which the disease spreads also makes it difficult to find and retain patients for clinical trials and other studies that would help researchers learn more about the disease.

"It's very traumatizing, of course, to the patient, but also to their families. There's little time to absorb the diagnosis before a patient ends up succumbing to the disease," said Hingorani, a faculty member at Fred Hutchinson Cancer Research Center in Seattle and professor at the University of Washington School of Medicine.

"With pancreatic cancer, it's a little bit of a Catch-22. That also is part of its challenge for clinicians and scientists who study it. It's been relatively understudied and underfunded because of this sense of futility," he said.

For now, he said, "Hope and optimism are the most you can offer a patient."

Julie Fleshman, CEO and president of the Pancreatic Cancer Action Network, want to build on that hope moving forward for patients and their families. Fleshman's father died of the disease only four months after being diagnosed.

"I wanted to know why more wasn't being done — why my dad, and thousands of other patients, were sent home to die. I've been with the organization now 17 years and have watched it grow from small grassroots to a national and worldwide movement," she told CBS News.

On Tuesday, Fleshman and about 600 other advocates — including 100 survivors — will be on Capitol Hill in Washington, D.C. for National Pancreatic Cancer Advocacy Day. They'll be raising awareness and asking lawmakers to stop proposed budget cuts to cancer funding.

"We want to remind the public that there's a sense of urgency," she said, noting that pancreatic cancer rates are expected to go up in the next decade as the population ages.

The organization also is asking people who can't make it to Washington to call their congressperson on Tuesday and ask for more support.

For those scientists who focus on pancreatic cancer research, Hingorani said they've resisted succumbing to a sense of futility and in recent years have felt a sense of promise.

"In the last few years, there have been a number of discoveries that have turned this cancer on its head. Things that were inexplicable before at least now become understandable," he said.

There's always been a disconnect between the ability to kill pancreas cells in a dish in the laboratory with a collection of drugs and the ability of those drugs to work against pancreatic cancer inside a patient.

"It is always a difficult prospect to treat a cancer that is growing inside a body versus outside, but for every other cancer, at least a subset of drugs that work in the lab would give you some kind of response in people," Hingorani explained.

In pancreatic cancer it was essentially zero. In the last several years, though, he and colleagues are beginning to understand one of the reasons for that.

"One of the primary mechanisms of resistance in pancreas cancer is that it actually decreases blood supply rather than increasing it," as is the case in other cancers, he said.

A second challenge of pancreatic cancer is that the implications of the clinical staging system isn't as clear-cut as it is, say, for breast cancer, where in stages 1 and 2, a patient can undergo surgery to remove a tumor and then go for radiation or chemotherapy to obliterate any remaining cancer cells, and then go on to expect a high likelihood of long-term survival.

Even if you catch pancreatic cancer early, at stage 1, it requires a very complicated surgery — one of the hardest operations known to surgeons, called the Whipple procedure. But even then, the 10-year survival rate is less than 10 percent. Two-thirds or more of patients end up developing metastatic disease.

Hingorani said it's because even those early tumors have actually already spread.

"They enter the bloodstream and find a way to survive in other organs at the microscopic level, so what looks like the clinical stage to our eye is really a micro-metastatic stage 4 tumor," he said.

Finding a good screening test for pancreatic cancer would be the Holy Grail for this killer, said Hingorani. Pancreatic cancer also doesn't put the immune system on high alert, so it's difficult to pick up on it through lab results that might flag other tumors.

"It doesn't respect the rules, or at least the main tenets we've learned about cancer biology," Hingorani said.

But he and colleagues in the field have begun to find ways to out-think tricky pancreatic cancer cells using molecular biology and immunotherapy techniques, and they're beginning to move their research out of lab dishes and lab animals and into human tests. One technique involves targeting certain aspects of a pancreas tumor cell that essentially primes it to become receptive to drug therapies that work in other cancers — a sort of one-two punch.

Hingorani's work is fueled by personal experience, he said. His own father was diagnosed with pancreatic cancer and died from the disease 19 years ago.

"He became one of the first patients I took care of as an attending physician and I'm still trying to settle the score," he said.

His hope for the future of pancreatic cancer: "It's an all-out assault on multiple fronts. First and foremost we want to take care of that vast majority of patients diagnosed too late, who don't have a chance for a cure. For those patients we want to take advantage of combined therapies that target different cellular compartments and aspects of tumor physiology."

For those who focus on this disease and have been doing it for a long time, Hingorani said, "We can describe those one or two or a handful of patients who live six, seven, eight years. I know a local case of a 10- or 11-year survivor. But the fact that I can picture in my mind these people shows you what a rare event long-term survival is and where we need to be."

U.S. Supreme Court Justice Ruth Bader Ginsburg, diagnosed in 2009, is one of those people. Unlike most, her tumor was discovered very early during a routine check-up and she underwent surgery to remove the one centimeter-long growth.

As for Levine, he too has undergone surgery. He's seen his cancer spread to the lungs and remit, was bed-bound for months at one point, has undergone a couple of types of chemotherapy (and remains on chemo long-term), and has arrived in a good place now.

"When I have my CAT scans every quarter there is no evidence of disease," he said.

Levine knows he's one of the lucky ones. Two years out from his diagnosis, he's had the chance to vacation again with his wife and he's hoping to take part in his third Ironman Triathlon in Hawaii this coming October, if race officials will allow it.