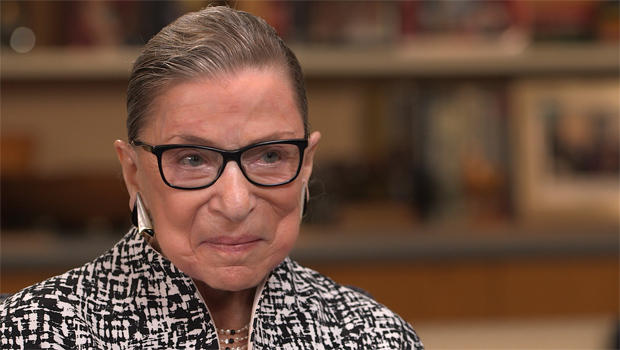 “All rise!” are the words we hear in court when the judge takes the bench. Now, Supreme Court Justice Ruth Bader Ginsberg is speaking out in her own words in a new book. She also shared a few words with Jane Pauley, beginning in front of the closet in her chambers:

Associate Justice Ruth Bader Ginsburg showed Pauley her collection of collars. “This is my dissenting collar,” she said. “It’s black and grim.”

“But it sparkles, too,” said Pauley, “so it gets attention.”

In fashion that’s known as a statement piece.

Ruth Bader Ginsburg is diminutive, but she looms large as the powerful liberal voice on the United States Supreme Court, appointed to the court by President Bill Clinton in 1993. At 83, Ginsburg is the oldest sitting justice; she’s known among her fans, including the President, as the notorious RBG.

And, along with Elena Kagan and Sonia Sotomayor, she is one of three women on the bench -- which strikes her as not nearly enough.

“People ask me when will you be satisfied with the number of women on the court? When there are nine,” she said. “For most of the country’s history, there were all white men.”

In fact, the Supreme Court was a men’s club for 192 years, until Sandra Day O’Connor was appointed by Ronald Reagan in 1981.

Ginsburg is now at the pinnacle of her law career.

“I don’t think it was by dint of luck so much, unless you disagree with me,” Pauley laughed. “Were you lucky, too?”

“My Own Words” (published by Simon & Schuster, a division of CBS) is her first book as a Supreme Court Justice. In it, she takes us through a life of achievement and loss.

Just two days before Ginsburg graduated in 1950 as valedictorian from James Madison High School in Brooklyn, her mother, Celia, died.

A picture of Celia, taken in 1946, “doesn’t show the suffering that she went through,” Ginsburg says, “’cause she had cancer, and it lingered for many years.”

Her mother’s influence has been enduring. “She said two things: Be a lady and be independent. Be a lady meant don’t give way to emotions that sap your energy, like anger. Take a deep breath and speak calmly.”

At Cornell University, she met Martin Ginsburg on a blind date; graduated and married in 1954; had her first child one year later; and entered law school in ‘56.

A portrait of Martin sitting on the patio of their house is “typical Marty,” she said. “Because he’s relaxed, he’s reading a good book, he is underdressed.”

After two years at Harvard, Ginsburg transferred to Columbia, and graduated first in her class.

“Tied for first!” she laughed.

But she didn’t get a single offer from a New York law firm: “I had three strikes against me: One, I was Jewish; two, I was a woman. But the killer was that I was the mother of a four-year-old child.”

“You graduated first in your class -- didn’t that say something about your ability to be both a mother and the best?” Pauley asked.

And later, she had a son, James.

“What if you’d had that career? You and I wouldn’t be talking today,” Pauley said.

“You’re exactly right. And my dear colleague, Sandra Day O’Connor, put that very well. She said, ‘If Ruth and I came of age at a time when there was no discrimination against women, we would be retired partners in a major law firm.’”

Instead, Ginsburg became a law professor at Rutgers University -- groundbreaking in the 1960s.

In the early ‘70s she wrote the first Supreme Court brief on gender discrimination. “I call 1972 the year of the woman,” Ginsburg said.

But ask her today about the Court’s landmark 1973 Roe v. Wade decision, affirming a woman’s right to have an abortion, and you might be surprised:

“Better to go step by step and have a series of decisions rather than have one decision that made every law of every state, even the most liberal, unconstitutional,” she said. “Too giant a stride to take. Now there are many people who disagree with me, who say that the backlash would have occurred in any event. And we will never know.”

The Supreme Court Justice’s home features shelves and shelves of books -- cookbooks. A tax law expert and gourmet chef, Martin Ginsburg (who died in 2010) collected scores of cookbooks. She had only one.

“I had a book called ‘The 60 Minute Chef,’” Ginsburg said. “’You started the minute you walked through the door, it would be on the table within 60 minutes. I had seven things that I made. We went in rotation. When I got to number seven, we went back to number one!”

That is, until her daughter, Jane, suggested she retire from the kitchen. “It came to her that Daddy’s cooking was ever so much better than Mother’s,” Ginsburg recalled. “Why shouldn’t Daddy cook every day?”

Ginsburg says her daughter, Jane, having fazed her out of the kitchen, now feels  a responsibility to keep her properly fed. These days, Jane -- a Columbia law professor -- does the cooking, once a month filling her mom’s freezer.

So what’s in the freezer today? “Rock fish with lemon and …  looks like escarole. Shrimp and squid with Saffron tomato sauce.”

She eats well!   But she has had health issues. Ginsburg battled colorectal cancer in 1999, and pancreatic cancer a decade later. Yet she never missed a day on the bench.

“Justice O’Connor had set the model,” she said. “She had breast surgery and she was on the bench nine days after her surgery. She said, ‘Now, Ruth, have your chemotherapy on a Friday. That way, you have the weekend to get over it’”

And get this: she does 20 Marine push-ups a day.

She might enjoy wine with dinner which, she says, explains why she was caught dozing during last year’s State of the Union Address.

“I get very little sleep when the court is sitting,” she said. “I stay up as long as is necessary for me to feel comfortable that I have a solid grasp on the case. So I can get by with two, not more than four hours.”

Famously a work-a-holic, Ginsburg says she loves the Court.  “Most collegial place I’ve ever worked. I think we understand that for the Court to work well, we have to not only respect, but genuinely like each other.”

But this summer, Ginsburg says she overstepped her own sense of judicial propriety when she called Donald Trump, among other things, a “faker.”

When asked about the prospect of a Trump Presidency, she added: “For the court it could be -- I don’t even want to comtemplate that.”

Trump tweeted a response: “Justice Ginsburg of the U.S. Supreme Court has embarrassed all by making very dumb political statements about me. Her mind is shot - resign!”

Ginsburg subsequently issued a statement regretting her “ill advised,” remarks. And that’s where she’d like to leave it.

“I said judges should not talk about political candidates. And the press has blown this up out of all proportion. So I would prefer not to add anything to what I have already said.”

Earlier this year, the court lost one of its most conservative voices, the brilliant and bombastic Antonin Scalia. And Ginsburg lost one of her closest friends, despite being on opposing sides of decisions. “Even when we were on opposite sides, he might call me and say, ‘Ruth, I’m not with you, but wouldn’t this be a better word than the one that I had?’ And I did the same thing with him.”

The best of buddies, they traveled and celebrated New Year’s Eve together, and their mutual passion for the opera inspired an opera written about them.

Last Monday -- the first Monday in October -- the court was back in session, though many of her most ardent admirers argue it’s time to step down.

“I will do this job as long as I feel that I can do it full steam. At my age, you have to take it year by year. So this year I know I’m fine. What will be next year or the next year? I can’t predict.”