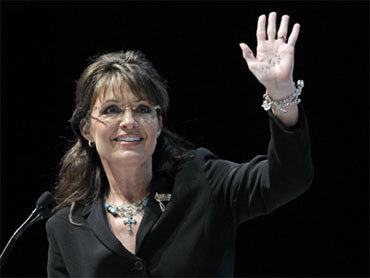 President Obama repeatedly said yesterday during his press conference on the Gulf oil spill that he takes responsibility for the disaster. Nevertheless, Republicans are pounding the president for failing to step up as a leader during the crisis. Some are also questioning his decision to extend for six months a moratorium on new offshore drilling plans.

Millions of gallons of oil have flowed into the Gulf of Mexico since the Deepwater Horizon oil rig exploded on April 20. Oil company BP, which was operating the rig, is responsible for the cost of the clean up and containment efforts under the 1990 Oil Pollution Act. Mr. Obama also said yesterday that BP is handling the containment efforts because its technology is superior to the government's for this kind of operation.

Former GOP vice presidential contender Sarah Palin, who popularized the slogan of "drill, baby, drill," in the 2008 election, took the president to task for pointing to BP as the responsible party.

"The fundamental problem at the core of this crisis is a lack of responsibility," she wrote in a Facebook note. "There's a culture of buck-passing at the heart of this administration that has caused the tragedy of a sunken oil rig to turn into a potential disaster."

Mr. Obama did say yesterday, "As far as I'm concerned, BP is responsible for this horrific disaster, and we will hold them fully accountable on behalf of the United States as well as the people and communities victimized by this tragedy."

He also stressed multiple times, however, that he took ultimate responsibility.

"In case anybody wonders, in any of your reporting, in case you were wondering who's responsible, I take responsibility," he said. "It is my job to make sure that everything is done to shut this down."

He also noted that "part of the purpose of this press conference is to explain to the folks down in the Gulf that ultimately it is our folks down there who are responsible."

"He suggested today that a 'culture of corruption' at the U.S. Minerals Management Service (MMS) was solely the previous administration's responsibility and that the failure of the inspection system was a failure of that administration," Palin wrote.

Mr. Obama did say that "there's no evidence that some of the corrupt practices that had taken place earlier took place under the current administration's watch." The corrupt practices that took place within the MMS during the Bush administration included having sex, using drugs and accepting gifts from energy company representatives with whom they did government business. A recent report from the Interior Department's inspector general revealed more dysfunction within the MMS prior to 2009. The inspector general is now investigating conduct starting in 2009.

Mr. Obama, however, acknowledged that "the culture had not fully changed in MMS."

"And absolutely I take responsibility for that," he said.

Like Palin, the National Republican Senatorial Committee questioned Mr. Obama's leadership after his remarks yesterday and needled him for his criticism of the Bush administration. A web video from the NRSC shows Mr. Obama in 2008 criticizing the "half measures, halfhearted leadership and red tape" that weighed down the response to Hurricane Katrina. The video suggests Mr. Obama's response to the oil spill is no better.

"Instead of taking responsibility for his own misplaced priorities and slow response to this catastrophe, President Obama continued to blame President George W. Bush during a press conference," the NRSC wrote in a blog post featuring its video. "This finger-pointing follows a deliberate pattern by the White House to deny responsibility for anything that takes place on President Obama's watch."

On C-SPAN this morning, Sen. Lamar Alexander (R-Tenn.), chairman of the Senate Republican Conference, said that the Oil Pollution Act calls for the president to ensure that oil spills are cleaned up.

Republicans are also questioning the president's plans to slow down the expansion of offshore drilling, which include extending a moratorium on new drilling for six months, suspending already-planned drilling exploration off the coast of Alaska, and suspending action on 33 deepwater exploratory drills off the Gulf Coast.

"I take issue with the President's decision to extend the moratorium on deepwater drilling should it be used to indefinitely suspend offshore drilling," Sen. John Cornyn (R-Texas) said in a statement. "The BP spill in the Gulf is a tragedy and there is no question we must conduct a thorough investigation into what led to this devastating spill, and we must take every step to stop and contain the leak. But with the needed safety measures in place, domestic drilling should be continued and encouraged."

Republican Sen. Lisa Murkowski of Alaska said the plan could mean "effectively killing Shell's participation in Alaska," the Associated Press reports. "That's not acceptable to me or Alaska."