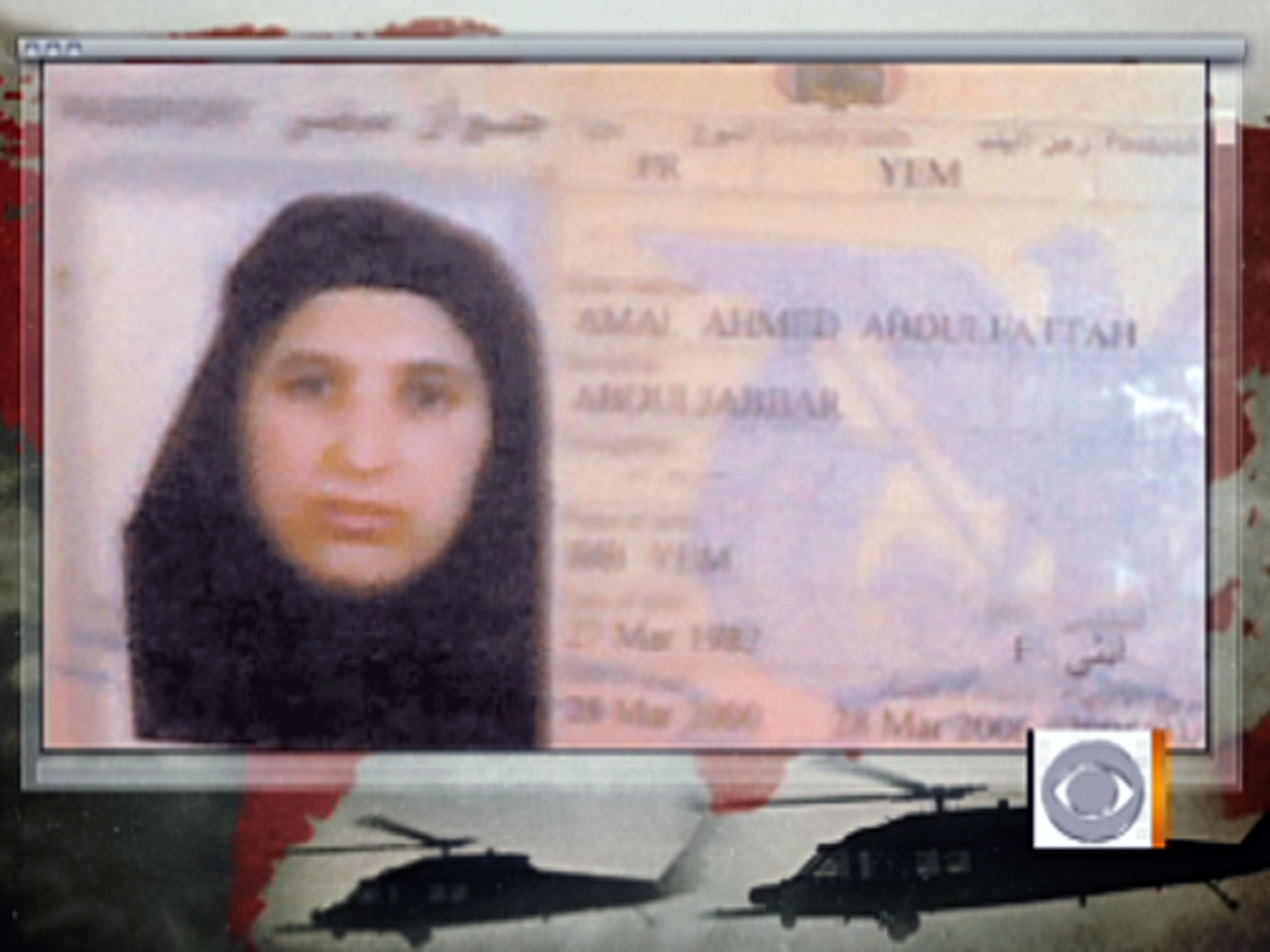 (AP) RAWALPINDI, Pakistan - Osama bin Laden spent his last weeks in a house divided, amid wives riven by suspicions. On the top floor, sharing his bedroom, was his youngest wife and favorite. The trouble came when his eldest wife showed up and moved into the bedroom on the floor below.

Others in the family, crammed into the three-story villa compound where bin Laden would eventually be killed in a May 2 U.S. raid, were convinced that the eldest wife intended to betray the al Qaeda leader.

The picture of bin Laden's life in the Abbottabad compound comes from Brig. Shaukat Qadir, a retired Pakistani army officer who spent months researching the events and says he was given rare access to transcripts of Pakistani intelligence's interrogation of bin Laden's youngest wife, who was detained in the raid.

Qadir was also given rare entry into the villa, which was sealed after the raid and demolished last month. Pictures he took, which he allowed The Associated Press to see, showed the villa's main staircase, splattered with blood. Other pictures show windows protected by iron grills and the 20-foot high walls around the villa.

Qadir's research gives one of the most extensive descriptions of the arrangements in bin Laden's hideout when U.S. SEAL commandos stormed in, killing bin Laden and four others. His account is based on accounts by an official of Pakistan's Inter-Services Intelligence agency who escorted him on a tour of the villa, the interrogation transcription he was allowed to read, and interviews with other ISI officials and al Qaeda-linked militants and tribesmen in the Afghan-Pakistan border region.

The compound where bin Laden lived since mid-2005 was a crowded place, with 28 residents -- including bin Laden, his three wives, eight of his children and five of his grandchildren. The bin Laden children ranged in age from his 24-year-old son Khaled, who was killed in the raid, to a 3-year-old born during their time in Abbottabad. Bin Laden's courier, the courier's brother and their wives and children also lived in the compound.

The 54-year-old bin Laden himself seemed aged beyond his years, with suspected kidney or stomach diseases, and there were worries over his mental health, Qadir said he was told by ISI officials and an al Qaeda member he interviewed in the border regions.

Bin Laden lived and died on the third floor. One room he shared with his youngest wife, Amal Ahmed Abdel-Fatah al-Sada, a Yemeni who was 19 when she married the al Qaeda leader in 1999. Another wife, Siham Saber, lived in another room on the same floor that also served as a computer room, Qadir told AP.

The arrival of his eldest wife, Saudi-born Khairiah Saber, in early 2011 stirred up the household, Amal said in her ISI interrogation, according to Qadir.

There was already bad blood between Khairiah, who married bin Laden in the late 1980s, and Amal because of bin Laden's favoritism for the younger Yemeni woman, Qadir said he was told by tribal leaders who knew the family.

Even ISI officials who questioned Khairiah after the raid were daunted by her.

"She is so aggressive that she borders on being intimidating," Qadir said he was told by an ISI interrogator.

Amal stayed close to bin Laden as he fled Afghanistan into Pakistan following the 2001 U.S. invasion. She took an active role in arranging protection for him and bin Laden wanted her by his side, the tribal leaders told Qadir.

Khairiah fled Afghanistan in 2001 into Iran along with other bin Laden relatives and al Qaeda figures. She and others were held under house arrest in Iran until 2010, when Tehran let them leave in a swap for an Iranian diplomat kidnapped in Pakistan's frontier city of Peshawar.

Khairiah showed up at Abbottabad in February or March 2011 and moved into the villa's second floor, Amal told her interrogators.

Khalid, bin Laden's son with Siham, was suspicious, according to Amal's account. He repeatedly asked Khairiah why she had come. At one point, she told him, "I have one final duty to perform for my husband." Khalid immediately told his father what she had said and warned that she intended to betray him.

Amal, who shared Khalid's fears, said bin Laden was also suspicious but was unconcerned, acting as if fate would decide, according to Qadir's recounting of the interrogation transcript.

There is no evidence Khairiah had any role in bin Laden's end. Accounts by Pakistani and U.S. intelligence officials since the May 2 raid have made no mention of her. Instead, U.S. officials have said the courier inadvertently led the CIA to the Abbottabad villa after they uncovered him in a monitored phone call.

The courier, a Pakistani known by his pseudonym Abu Ahmed al-Kuwaiti, lived with his wife and four children on the villa's first floor. His brother, his wife and three children lived in a guest house in the compound. Al-Kuwaiti, his brother and the brother's wife were killed in the raid.

Bin Laden had two marriages before Khairiah that ended in divorce and had more than 20 children with his various wives.

Amal gave her interrogators details on bin Laden's movements after fleeing Afghanistan. Her account underscored that bin Laden did not stay long in Pakistan's tribal-run regions on the border where the United States long presumed he was holed up.

She and bin Laden hid for several months in 2002 in Salman Talab, a suburb of Kohat, a northwest Pakistani border town. There bin Laden was visited at least once by Khalid Sheik Mohammed, the 9/11 mastermind arrested in Rawalpindi on March 1, 2003.

Amal said they moved constantly to avoid being spotted for several months in South Waziristan, a border region. In 2004, she and other family members went to Shangla, a town in the Swat Valley, 80 miles northwest of the capital Islamabad. Bin Laden joined them by doubling back through Afghanistan because it was feared he could be identified if he crossed Pakistan.

Later in 2004, they moved to Haripur, only 20 miles from Islamabad, according to the interrogation transcripts. After several months there, they moved in the summer of 2005 to the villa in Abbottabad, a town 30 miles from the capital and home to a large military base.

ISI officials contacted by the AP refused to comment on Qadir's account. The wives and bin Laden family members who were in the villa during the raid remain in Pakistani custody.

Qadir, a 35-year veteran and now a security consultant, took it upon himself to research what happened in the May 2 raid. He relied on contacts in the ISI and in the border regions where he was long based.

An old friend who is a brigadier in the ISI allowed Qadir to read the transcripts of the interrogations of Amal. Qadir asked that the ISI brigadier not be identified because the information remains classified.

Qadir said he was allowed to visit the villa four times, most recently in November. He described the bin Laden bedroom, saying one wall was peppered with bulletholes and splattered with blood, which his ISI escort told him was from Amal, who was shot in the leg during the raid. There was also blood on the ceiling, which Qadir presumed was from bin Laden, who was shot through the eye.

Qadir said he was struck by the lack of defenses -- no basement, no warning system, no escape routes.

"It was a death trap if it were ever attacked."