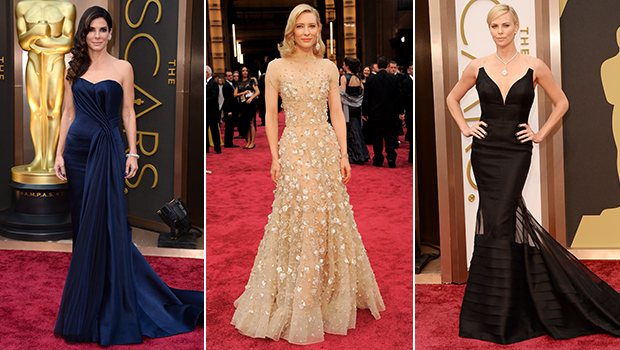 Stars stunned on the red carpet of the Oscars Sunday night -- with sequins, varying shades of blue and everything in between.

With a supporting actress Oscar now in her possession, a tearful Lupita Nyong'o, concluded a red-carpet season Sunday night as a fashion darling for sexy silhouettes and colors that wow.

She didn't disappoint at the 86th Academy Awards, wearing a pale blue Prada goddess gown and a sparkly gold-and-diamond headband from Fred Leighton. She helped design the dress, too.

Nor did Jennifer Lawrence in a $2 million, 100-carat diamond necklace from Neil Lane to accent her girl-on-fire orange-red strapless dress from Dior. On Cate Blanchett's ears were 33 carats of opal in a huge drop design that did justice to her beaded Armani gown in a light tan color.


Blanchett's heavily embellished gown sparkled under the lights at the Dolby Theatre in Los Angeles when she collected her Oscar for best actress in "Blue Jasmine."

While she's not under contract by Giorgio Armani, Blanchett does favor the house. "Armani has made donations to the theater that she and her husband run in Sydney, so she's very loyal to him," said Hal Rubenstein, editor at large of InStyle magazine.


Muted colors, like those worn by Blanchett and Nyong'o's ice blue, were one of the night's big trends, said Estee Stanley, a stylist who worked with Portia de Rossi, in a regal Naeem Khan halter with beads and lace, and Jessica Biel, dressed in a metallic sparkler from Chanel dripped with diamond jewelry from Tiffany.

"The colors of the night were pinks and blues. Statement necklaces were back," Fitzgerald said.

But Marquez mused: "A general sameness hung over the whole thing. There was not enough experimentation."

While some of the necklines plunged, said Rubenstein, "there was nothing overtly sexy. They were all fairly reserved."

Here's a few more to talk about:

He praised her color choice and the full-pleated gown with a plunging bodice. The color, he said, was perfect for her dark skin tone. He called her jeweled headband a nice touch of youth and wit.

"There are now so many other awards shows where you can take chances. You can be silly, you can be funny. The Oscars is like coronation night. On Oscar night you look for classic glamour, you look for the glamour that really is defined for us by Hollywood, by the movies that we've seen. All those great Edith Head costumes. ... The way Grace Kelly was dressed by Hitchcock. That's what we have drilled into our head as what glamour is and so many people reference that type of glamour," Rubenstein said.

On this night, Nyong'o was among them.

"She carries herself so beautifully. She has such poise. Such grace," he said.

Marquez added: "I loved this, full stop. Every single bit of it. The color is perfect, the way the skirt flows and moves is sublime. She won the entire night as far as I'm concerned."

Fitzgerald said he "loved it, but not as much. I think the neckline is too plunging and too wide. Everything else about is pretty close to perfect, though. It's a fresh take on the princess gown, with an even fresher take on the tiara."


Ok, so yeah, she tripped again, this time on the red carpet as opposed to running up the Oscar steps to collect a statuette, but she giggled it off and stunned in strapless Dior akin to the bright color of a Calvin Klein she wore in 2011.

Of a Lupita versus Jennifer smackdown, Rubenstein chided: "C'mon now, they both looked beautiful. Jennifer's was also a beautiful color."

Lawrence, with a swept-back bob, pulled off a bit of ruffle at the hip. It was a form-fitting dress in contrast to her full gown at last year's Oscars, when she stumbled as she made her way up the stairs to collect her award for "Silver Linings Playbook."

"The Dolby is a very big theater and when you wear a dress with a lot of volume like she did last year, you kind of get lost in that volume," Rubenstein said. "The more body-conscious dress really focuses on you."

Fitzgerald and Marquez were not quite as impressed.

"I'll say it: I'm bored," Marquez said. "It has none of the drama of last year's Dior gown. It's just another slinky gown on a night with more than enough of them."

Fitzgerald added: "I have to agree. And the red seems kind of done. It just doesn't feel very fresh."


Was it Navy blue? Royal blue? Simply, dark blue? Whatever. It was a deep-tone Alexander McQueen and an example of an edgy fashion house offering up an Old Hollywood-style stunner, Rubenstein said.

Both Rubenstein and Stanley called the look Navy, noting a pleated draping that fell to one side. It was in line with a lot of blue, some green, and not quite so much red as in years and carpets past.

Marquez called it, "Another stunner for the night - and a personal best for her. She tends toward colorless, slinky dresses and pin-straight hair. It's refreshing to see something with some shape."

Fitzgerald also lauded her loose, sideswept hair - a deep and dramatic side part another trend of the night.

He called the dress "crazy-dramatic. It's the kind of look, top to bottom, that makes you step back and say 'Now, that's a movie star.'"


Black made a reappearance, said Rubenstein, and it remains a dynamic color.

Theron was elegant in black Dior, paired with a $15 million Harry Winston necklace that had a cluster of diamonds at the center.

"Her simple dress and massive necklace was a classic yet fresh look," Stanley said.

The look had invisible straps and a curvy plunge, clinging to her body with a partially sheer train in back.

"As far as I'm concerned, this is the look that won the night," Fitzgerald said. "She's serving up serious Madame X here," as in sexy, dark and mysterious.

Theron's short hair fell over her forehead from the evening's popular side part.

She wore a blue column strapless by Gucci with a lapel-like, fold-over at the strapless part. It was another Navy and stuck close to the body, flowing into a short train at the hem.