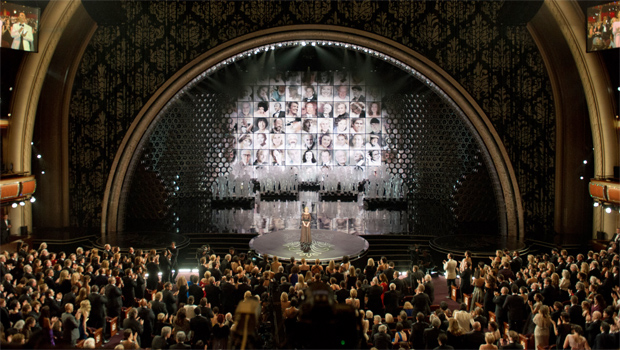 Actors Corey Monteith, Dennis Farina, Jonathan Winters and Lee Thompson Young; innovative New Wave director Alain Resnais ("Last Year at Marienbad"); and Richard Sarafian, director of the cult film "Vanishing Point," were among those missing from the Academy Awards' In Memoriam segment of Sunday's ceremony, honoring industry luminaries who have passed away during the previous year.

This year's In Memoriam, which was introduced by Glenn Close and featured a performance by Bette Midler of the song "Wind Beneath My Wings," comprised 47 names, including James Gandolfini, Philip Seymour Hoffman, Peter O'Toole, Paul Walker and Shirley Temple. [For a complete listing see below.]

The segment ended with an on-screen banner memorializing Sarah Jones, a crewmember who was recently killed in a train accident during pre-production of the film "Midnight Rider." Jones was the subject on an online petition and social media campaign to have her included in this year's In Memoriam segment.

For the dozens of actors, directors, craftspeople and industry executives who had died since last year's awards ceremony who were not mentioned during the broadcast, the Academy directed viewers to an online gallery of more than 100 people at oscar.com. The Academy also maintains a Memorial page for its members at its website, oscars.org.

Brian Ackland-Snow -- Art Director (Oscar-winner, A Room With a View")

Julie Harris -- Actress, "East of Eden," "The Member of the Wedding" (Oscar nomination)

Ray Harryhausen -- Special effects master, "Jason and the Argonauts" and "The 7th Voyage of Sinbad"; special Oscar recipient in 1991

Ruth Prawer Jhabvala -- Screenwriter, Oscar-winner for "A Room With a View," "Howards End"

Peter O'Toole --Actor, eight-time Oscar nominee (including "Lawrence of Arabia," "The Lion in Winter" and "My Favorite Year"); Honorary Oscar recipient in 2003