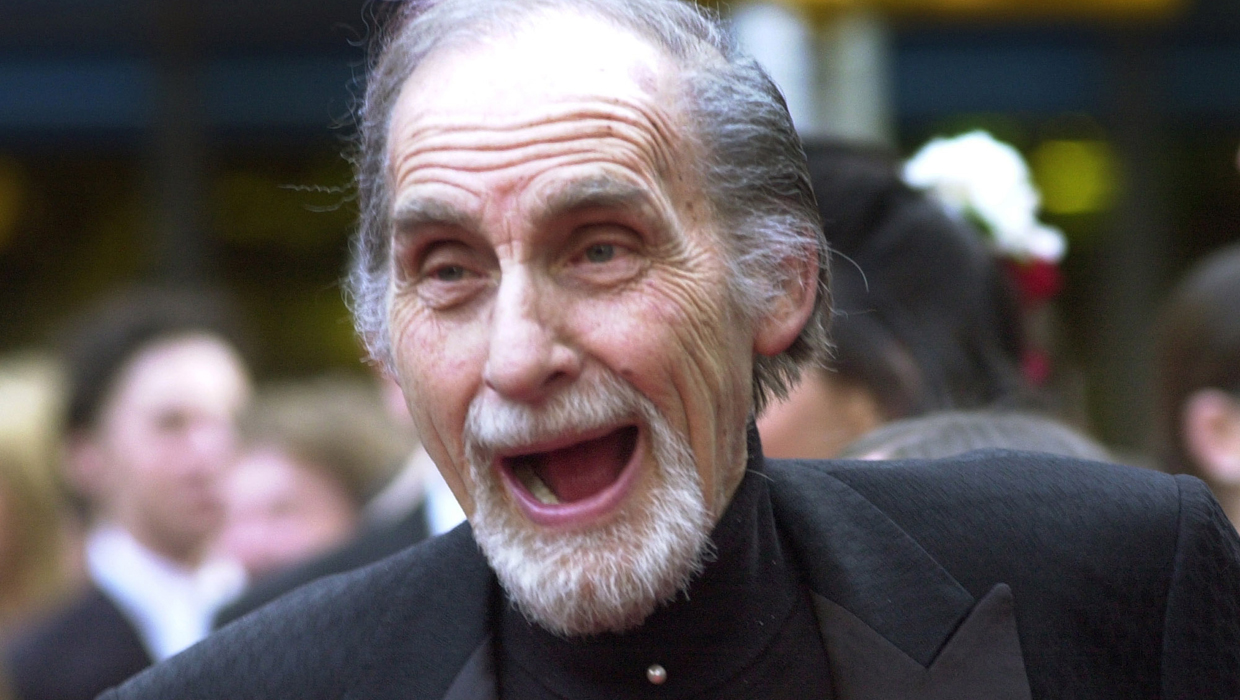 Sid Caesar, the innovative, influential comedy genius whose sketches lit up 1950s television with zany humor, has died at age 91.

Caesar died at his home in the Los Angeles area after a brief illness, family spokesman Eddy Friedfeld said.

In his two most important shows, "Your Show of Shows" (which ran from 1950-1954) and "Caesar's Hour" (1954-1957), Caesar displayed remarkable skill in pantomime, satire, mimicry, dialect and sketch comedy. And he gathered a stable of young writers who went on to worldwide fame in their own right -- including Neil Simon and Woody Allen.

While best known for his TV shows, which have been revived on DVD in recent years, he also had success on Broadway and occasional film appearances, notably in in the 1963 comedy epic "It's a Mad Mad Mad Mad World." He also played Coach Calhoun in the big-screen adaptation of "Grease" and its sequel, "Grease 2."

Caesar brought observational comedy to TV before the term, or such latter-day practitioners as Jerry Seinfeld, were even born.

In one celebrated routine, he impersonated a gumball machine; in another, a baby; in another, a ludicrously overemotional guest on a parody of "This Is Your Life."

He played an unsuspecting moviegoer getting caught between feuding lovers in a theater. He dined at a health food restaurant, where the first course was the bouquet in the vase on the table. He was interviewed as an avant-garde jazz musician who seemed happily high on something.

The son of Jewish immigrants, Caesar was a wizard at spouting melting-pot gibberish that parodied German, Russian, French and other languages. His Professor was the epitome of goofy Germanic scholarship.

Some compared him to Charlie Chaplin for his success at combining humor with touches of pathos.

"As wild an idea as you get, it won't go over unless it has a believable basis to start off with," he told The Associated Press in 1955. "The viewers have to see you basically as a person first, and after that you can go on into left field."

Caesar performed with such talents as Howard Morris and Nanette Fabray, but his most celebrated collaborator was the brilliant Imogene Coca, his "Your Show of Shows" co-star (who died in 2001). They performed skits that satirized the everyday -- marital spats, inane advertising, strangers meeting and speaking in cliches, a parody of the Western "Shane" in which the hero was "Strange." They staged a water-logged spoof of the love scene in "From Here to Eternity." ''The Hickenloopers" husband-and-wife skits became a staple.

Caesar worked closely with his writing staff as they found inspiration in silent movies, foreign films and the absurdities of '50s postwar prosperity.

Among those who wrote for Caesar: Mel Brooks (who in 1982 called him "the funniest man America has produced to date"), Larry Gelbart, Simon and his brother Danny Simon, and Allen, who was providing gags to Caesar and other entertainers while still in his teens.

"He was one of the truly great comedians of my time and one of the finest privileges I've had in my entire career was that I was able to work for him," Allen said.

Carl Reiner, who wrote in addition to performing on the show, based his "Dick Van Dyke Show" -- with its fictional TV writers and their temperamental star -- on his experiences there. Simon's 1993 "Laughter on the 23rd Floor" and the 1982 movie "My Favorite Year" also were based on the Caesar show.

A 1996 roundtable discussion among Caesar and his writers was turned into a public television special. Said Simon, the Pulitzer Prize-winning playwright: "None of us who've gone on to do other things could have done them without going through this show."

"This was playing for the Yankees; this was playing in Duke Ellington's band," said Gelbart, the creator of TV's "M-A-S-H" and screenwriter of "Tootsie," who died in 2009.

Billy Crystal called Caesar "a true giant, to this day the greatest sketch comedian of all time, my first comedy  hero and inspiration."

In 1962, Caesar starred on Broadway in the musical "Little Me," written by Simon, and was nominated for a Tony. He played seven different roles, from a comically perfect young man to a tyrannical movie director to a prince of an impoverished European kingdom.

"The fact that, night after night, they are also excruciatingly funny is a tribute to the astonishing talents of their portrayer," Newsweek magazine wrote. "In comedy, Caesar is still the best there is."

His and Coca's classic TV work captured a new audience with the 1973 theatrical compilation film "Ten From Your Show of Shows."

He was one of the galaxy of stars who raced to find buried treasure in the 1963 comic epic "It's a Mad Mad Mad Mad World," and in 1976 he put his pantomime skills to work in Brooks' "Silent Movie."

But he later looked back on those years as painful ones. He said he beat a severe, decades-long barbiturate and alcohol habit in 1978, when he was so low he considered suicide. "I had to come to terms with myself. 'Yes or no? Do you want to live or die?'" Deciding that he wanted to live, he recalled, was "the first step on a long journey."

When "Caesar's Hour" left the air in 1957, Caesar was only 34. But the unforgiving cycle of weekly television had taken a toll: His reliance on booze and pills for sleep every night so he could wake up and create more comedy.

It took decades for him to hit bottom. In 1977, he was onstage in Regina, Canada, doing Simon's "The Last of the Red Hot Lovers" when, suddenly, his mind went blank. He walked off stage, checked into a hospital and went cold turkey. Recovery had begun, with the help of wife Florence Caesar, who would be by his side for more than 60 years and helped him weather his demons.

Those demons included remorse about the flared-out superstardom of his youth -- and how the pressures nearly killed him. But over time he learned to view his life philosophically.

"You think just because something good happens, THEN something bad has got to happen? Not necessarily," he said with a smile in 2003, pleased to share his hard-won wisdom: "Two good things have happened in a row."