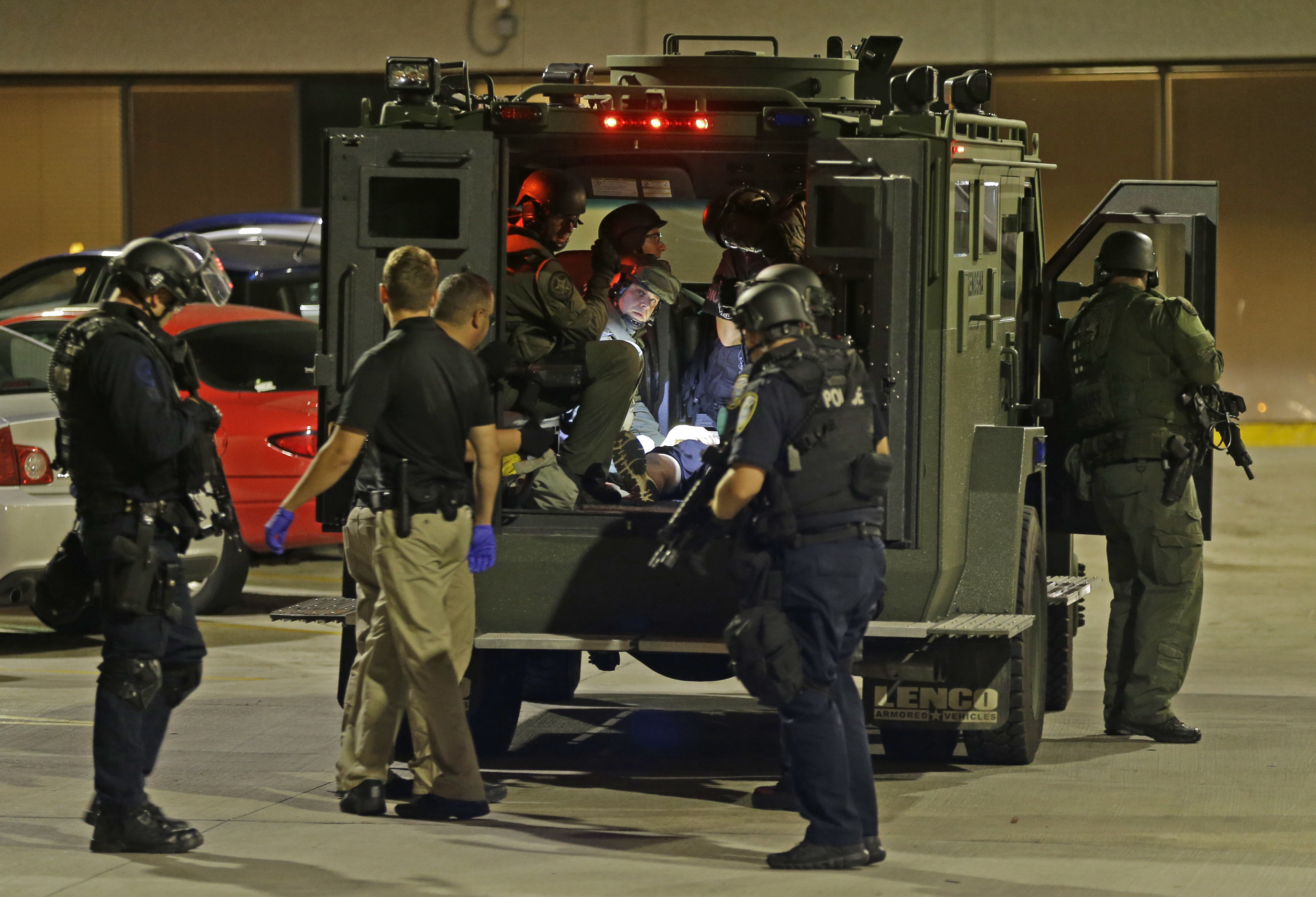 MILWAUKEE -- Police said one person was shot at a Milwaukee protest on Sunday evening and officers used an armored vehicle to retrieve the injured victim during a second night of unrest over the police shooting of a black man, but there was no repeat of widespread destruction of property.

Some two dozen officers in riot gear confronted a group who were throwing rocks and other objects at police near where Sylville K. Smith was fatally shot a day earlier. Police moved in to try to disperse the crowd and warned of arrests.

Local television showed police forming a line and using shields to deflect the objects. One police officer fell to the ground after apparently being hit by one of the objects and was moved away by fellow officers. Police also said an injured officer was taken to hospital after a rock broke the windshield of a squad car.

Earlier, video taken from a media helicopter showed a small group of protesters running through the streets, picking up orange construction barriers and hurling them out of the way.

Police say an 18-year-old Milwaukee man was seriously injured when he was shot during the late night protest. Officers used an armored vehicle to retrieve the injured man and take him to a hospital. There has been no update on his condition. Police say they are seeking suspects in the shooting.

Police said there at least one car was set on fire, and there were several locations where shots were fired, reports CBS Milwaukee affiliate WDJT-TV.

There were no other reports of injuries and no major destruction of property after six businesses were burned in the unrest Saturday. In addition to the businesses that were burned to the ground Saturday night, 17 people were arrested and four police injured.

WDJT reported Marquette University police asked people on campus to stay indoors as a precaution due to the unrest.

Earlier Sunday, police Chief Edward Flynn said the man whose death touched off Saturday night's rioting was shot after he turned toward an officer with a gun in his hand.

Wisconsin Gov. Scott Walker put the National Guard on standby for any repeat of violence. Protests were peaceful most of Sunday evening before the confrontation after 11 p.m.

Flynn cautioned that the shooting was still under investigation and authorities were awaiting autopsy results, but said that, based on the silent video from the unidentified officer's body camera, the officer "certainly appeared to be within lawful bounds."

At the same news conference, Mayor Tom Barrett said a still image pulled from the footage clearly showed a gun in 23-year-old Sylville K. Smith's hand as he fled a traffic stop Saturday.

"I want our community to know that," Barrett said. But he also called for understanding for Smith's family.

"A young man lost his life yesterday afternoon," the mayor said. "And no matter what the circumstances are, his family has to be hurting."

Flynn declined to identify the officer who shot Smith but said he is black. The police chief said he wasn't sure what prompted the stop but described Smith's car as "behaving suspiciously."

After watching the officer's body camera footage, Flynn said the entire episode took about 25 seconds, from the start of the traffic stop until shots were fired. He said Smith ran "a few dozen feet" and turned toward the officer while holding a gun.

"It was in his hand. He was raising up with it," the chief said. He said the officer had told Smith to drop the gun and he did not do so. It was unclear how many rounds the officer fired. Smith was hit in the chest and arm, Flynn said.

Online court records showed multiple charges against Smith dating back to 2013. One was as minor as retail theft -- which was dismissed -- and other less serious offenses included speeding, driving without insurance, driving with a suspended license or having open intoxicants in a vehicle.

There were more serious charges. Smith was accused in a shooting last year and charged with recklessly endangering safety, a felony.

The Milwaukee Journal Sentinel reported that Smith was subsequently accused of pressuring the victim to recant statements that identified him as the gunman and was charged with trying to intimidate a witness. The charges were dropped because the victim recanted the identification and failed to appear in court, Chief Deputy District Attorney Kent Lovern told the newspaper Sunday.

Smith also pleaded guilty to carrying a concealed weapon in 2014.

Milwaukee County Sheriff David Clarke said at a news conference that Smith had been arrested 13 times.

"He's got a bunch of drug arrests here, robbery, use of force," Clarke said.

But Smith was father to a 2-year-old toddler, too, his mother said.

"My son is gone due to the police killing my son," a distraught Mildred Haynes told the Journal Sentinel on Sunday. "I am lost."

When Walker activated Wisconsin's National Guard, 125 Guard members reported to local armories to prepare for further instructions. Flynn said they would not be deployed unless the chief decided to do so. Flynn said 150 department officers specially trained in managing big protests had also been mobilized.

A vigil was held on Sunday night on Milwaukee's Northeast side, reports WDJT. Some people who turned out told the station that no matter what circumstances led up to the shooting, violence wasn't the answer.

Hundreds came out to remember Smith.

Six businesses were burned in the unrest that spilled past midnight Sunday. Seventeen people were arrested, Flynn said, and four officers were hurt from flying concrete and glass, although all of them have been released from hospital.

Milwaukee Alderman Khalif Rainey, who represents the neighborhood that erupted, said the city's black residents are "tired of living under this oppression."

Milwaukee County Sheriff David Clarke said Smith had been arrested 13 times. Online court records showed a range of charges against Smith, many of them misdemeanors.

The Milwaukee Journal Sentinel reported that Smith was also charged in a shooting and was later charged with pressuring the victim to withdraw testimony that identified Smith as the gunman. The charges were dropped because the victim recanted the identification and failed to appear in court, Chief Deputy District Attorney Kent Lovern told the newspaper.

Smith's sister told The Associated Press that the family wants prosecutors to charge the officer who shot him.

Kimberly Neal, 24, spoke as supporters surrounded her at the vigil as she held a bouquet of blue balloons.

She asked people for donations for his burial.

Asked about the violence on Saturday night, Neal said: "People stuck together and they are trying to stand up," for their rights.

Smith was father to a 2-year-old toddler, too, his mother said. "My son is gone due to the police killing my son," a distraught Mildred Haynes told the Journal Sentinel on Sunday. "I am lost."

Smith's younger sister, Sherelle Smith, 22, told the Journal Sentinel her brother carried a gun because he was scared and needed to protect himself, not because he was violent. She said he was known around the neighborhood for his style and dance moves. "He was a ladies' man. That's the worst thing about him," she said.

"I'm not going to say he was an angel. He was out here living his life," Smith's godmother, Katherine Mahmoud, told the Journal Sentinel.

The anger at Milwaukee police is not new and comes as tension between black communities and law enforcement has ramped up across the nation, resulting in protests and the recent ambush killings of eight officers in Baton Rouge, Louisiana, and Dallas.

Nearly 40 percent of Milwaukee's 600,000 residents are black, and they are heavily concentrated on the north side.

Milwaukee was beset by protests and calls for police reform after an officer shot and killed Dontre Hamilton, a mentally ill black man, in 2014. Unrest later flared up again in Wisconsin in 2015 after a white police officer in Madison fatally shot an unarmed 19-year-old biracial man following a confrontation where the cop forced his way inside the man's apartment after hearing a disturbance while responding to a call.

In December, the U.S. Justice Department announced it would work with Milwaukee police on changes.

Critics said the police department should have been subjected to a full Justice Department investigation like the one done in Ferguson, Missouri, after the killing of black 18-year-old Michael Brown in 2014 touched off violence there.

The officer involved in the most recent Milwaukee shooting was 24 years old and has been on the force for three years, according to the department.