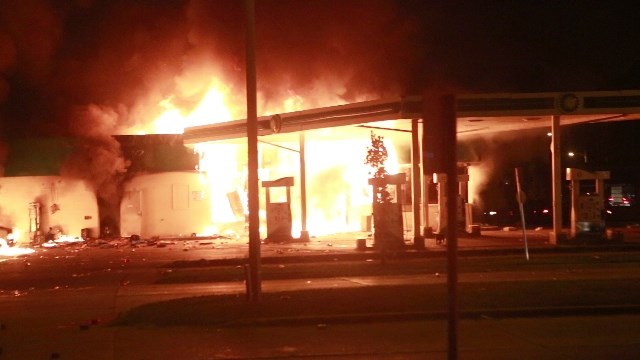 MILWAUKEE - Simmering anger over the fatal shooting of a man by police erupted in violence on Milwaukee's north side, with protesters skirmishing with officers over several hours and setting fire to at least four businesses in an outburst the mayor says was fed by social media.

The violent protests appear to be part of the tension between minority communities and police officers that has boiled over in recent months.

The uprising that broke out Saturday evening didn't subside until after midnight, after Mayor Tom Barrett and other city leaders appeared at a news conference to plead for calm. Police said three people were arrested, and one officer was hurt by a brick thrown into a squad car.

The triggering event came Saturday afternoon, when a man fleeing police after a traffic stop was shot and killed. Police said the man was armed, but it wasn't clear whether he was pointing the gun or aiming it at officers. Barrett said the man was hit twice, in the chest and arm. Neither his race nor the officer's was immediately released, nor were they identified.

The shooting was being investigated by the state. The officer was wearing a body camera, Barrett said.

The mayor said the uprising was driven by social media messages instructing people to congregate in the area.

"We have to have calm," Barrett said at the news conference. "There are a lot of really good people who live in this neighborhood."

WDJT reports that a man identifying himself as the victim's brother (seen in the above video) says the protests were a "riot" and they happened because police "failed to protect us like they were sworn to do."

Alderman Khalif Rainey, who represents the district where the violence occurred, said the city's black residents are "tired of living under this oppression." He said he didn't justify the violence "but nobody can deny that there are racial problems here in Milwaukee, Wisconsin, that have to be rectified."

Barrett said the 23-year-old man who died was stopped by police for "suspicious activity." Police said earlier that he was carrying a gun that had been stolen in a March burglary in suburban Waukesha.

CBS Milwuakee affiliate WDJT reports the 23-year-old suspect had a lengthy arrest record. The victim of the suspect's burglary reported 500 rounds of ammunition were also stolen with the handgun.

"This stop took place because two officers ... saw suspicious activity," the mayor said. "There were 23 rounds in that gun that that officer was staring at. I want to make sure we don't lose any police officers in this community, either."

WDJT reports the officer is a 24-year-old male with six years of service with the Milwuakee Police Department, including three years as an officer. He was not injured and, as is standard practice, will be placed on administrative duty during the investigation.

As many as 100 protesters massed at 44th Street and Auer Avenue between 8 and 9 p.m., surging against a line of 20 to 30 officers. The Milwaukee Journal Sentinel reported that officers got in their cars to leave at one point and some in the crowd started smashing a squad car's windows. Another police car was set on fire. The newspaper reported that one of its reporters was shoved to the ground and punched.

Around 11 p.m., police with shields and helmets moved slowly into the intersection, telling a crowd of about 50 people to disperse. Some threw rocks and other debris at police, who held up their shields. People in the crowd also threw objects at a business a half-block from the intersection. A nearby traffic light was bent over and bus shelters overturned.

The businesses that burned included a BMO Harris bank branch, a BP gas station, an O'Reilly Auto Parts store and a beauty supply store. Firefighters held back from the gas station blaze because of gunshots.

CBS Milwuakee affiliate WDJT reports that the gas station that was torched had been the focal point of community anger recently. Protesters said in July that gas station employee Bhupinder Singh fired gun shots at children. Singh said the children rushed the store and he feared for his life.

Police said the man who was shot had an arrest record. The 24-year-old officer who shot the man has been placed on administrative duty. The officer has been with the Milwaukee department six years, three as an officer.

The shooting occurred just a few blocks from two fatal shootings Friday and Saturday, part of a violent stretch in the city in which five people died in shootings during a nine-hour stretch. Assistant Chief Bill Jessup alluded to the violence in discussing the fatal shooting.

"As everyone knows, this was a very, very violent 24 hours in the city of Milwaukee," Jessup told the Journal Sentinel. "Our officers are out here taking risks on behalf of the community and making split-second decisions."