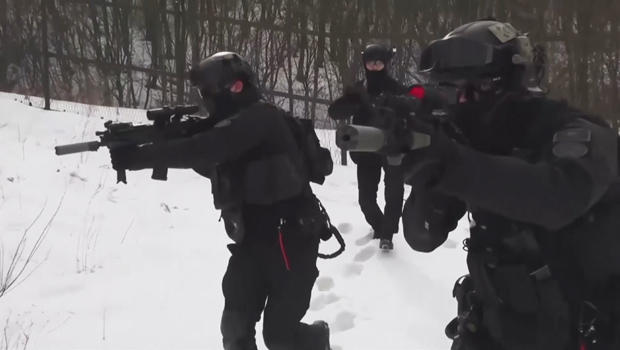 When Pyeongchang was awarded the 2018 Winter Olympic Games more than seven years ago, tensions in this region were much lower and North Korea did not have nuclear weapons thought capable of hitting the United States. But the situation here is now very different, as security concerns involve everything from terrorism to war.

South Korea's government reportedly has banned 36,000 foreigners from entering the country for the Winter Olympics, because of security issues.

Security forces have been conducting terror drills near Olympic sites – from a terrorist taking athletes hostage and about to ram a vehicle into an Olympic stadium, to a chemical bomb exploding in a trash can as spectators run for their lives, and a drone carrying explosives shot out of the sky.

A law enforcement command center in Pyeongchang monitors security during the Games.

That includes South Korean marines training with their American counterparts, testing their tolerance for the cold and snow.

Of course, one of the biggest concerns is North Korea.

The U.S. and South Korea delayed their annual military exercises so as not to provoke North Korea. The North's decision to send a large delegation to the Games is thought to have reduced the chances that it will disrupt the event with a missile launch or nuclear test.

In 1987, ten months before South Korea held the Summer Olympics in Seoul, North Korean agents placed a bomb on a Korean Air flight, killing all 115 people on board.

Another big concern at the Olympics is some sort of massive cyber attack that could disrupt the Games. North Korea is well known for its cyber warfare skills. A private cyber security firm has been hired to try to prevent such an attack.