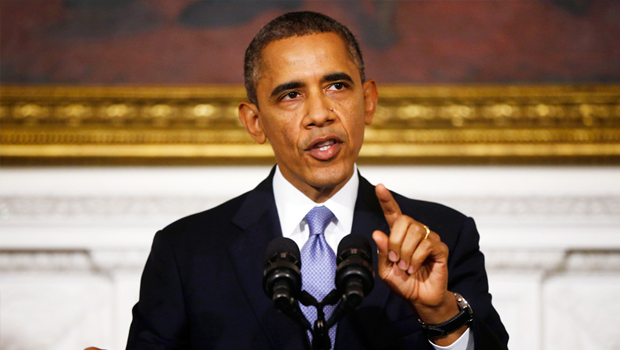 President Obama said Thursday morning that his top three priorities for the rest of the year will be passing a budget, immigration reform, and a farm bill now that the government has been reopened and a default averted.

It's a tall order for a Congress that that remains bitterly divided even after an agreement was reached to end the latest crisis. Although Mr. Obama made out far better than Republicans, he did little to hold back his lingering frustration with his opponents and said the ways of Washington had to change.

"Let's be clear: there are no winners here. These last few weeks have inflicted completely unnecessary damage on our economy," he said. "The American people's frustration with what goes on in this town has never been higher. That's not a surprise, that the American people are completely fed up with Washington. At a moment when our economic recovery demands more jobs, more momentum, we've got another self-inflicted crisis that set our economy back. And for what? There was no economic rationale for all of this."

The top priority for the coming weeks will be passage of a budget, a process that has been stalled in Congress all year. Part of the deal brokered to reopen the government and lift the debt ceiling included instructions to the congressional leadership to appoint negotiators to craft a budget deal by mid-December.

The chairmen and ranking members of the House and Senate Budget Committees met for breakfast Thursday morning. All of the members described the meeting as positive and declined to start negotiating details in front of the press.

"We want to look for ways to find common ground and to get a budget agreement. Our goal is to do good for the American people. To get our debt under control. To do smart deficit reduction. And to do things we think can grow the economy and get people back to work," said House Budget Committee chairman Paul Ryan, R-Wis. Senate Budget Committee chairwoman Patty Murray, D-Wash., acknowledged that reconciling the House and Senate budgets will be challenging, but said, "those issues are all on the table. We'll be talking about all of them and our job is to make sure we have put forward a spending path and a budget path for this Congress in the next year or two or further if we can."

White House press secretary Jay Carney indicated to reporters Thursday afternoon that Mr. Obama would stand back and let Congress take the lead in budget talks. "What we are hopeful about is that Congress will seize an opportunity here to return to what has become known as regular order, which is have a budget conference where appointed members of the House and the Senate come together to try to reach a compromise budget," he said. The president's FY2014 budget, which was released earlier this year, reflects his priorities.

The committee has a major challenge ahead of them. Past groups have had little success reaching agreement.

The committee has a major challenge ahead of them. Past groups have had little success reaching agreement.

But Mr. Obama's other two priorities for the rest of the year - immigration reform and a farm bill - could prove equally challenging.

The Senate passed a comprehensive reform bill in June that House Republicans have said is a non-starter in the lower chamber. House Judiciary Committee Chairman Bob Goodlatte, R-Va., has advanced a series of single-issue bills that have no Democratic support, and House Democrats introduced a version of the Senate bill that includes a border-security plan with bipartisan support in the House. A bipartisan working group that had been crafting a comprehensive bill for the House collapsed last month.

Rep. Raul Labrador, R-Idaho, who was once a member of the bipartisan group now says that it would be "crazy" and "a very big mistake" for Republicans to negotiate with the president on immigration reform.

The farm bill, usually a bipartisan bill, barely made it out of the House of Representatives this year after Republicans demanded steep cuts in the food stamp program. The GOP leadership had to split the agriculture and food stamp components into two pieces to pass it, but the food stamp section seeks cuts nearly 10 times what Senate Democrats have proposed, meaning an agreement will be hard to reach.

Still, Mr. Obama said those three issues - the budget, immigration reform and a farm bill - "are three specific things that would make a huge difference in our economy right now. And we could get htem done this year, if our focus is on what's good for the American people."

He told Republicans that politicians should work to improve government rather than purposely blocking it from working efficiently. "You don't like a particular policy or a particular president, then argue for your position. Go out there and win an election," he said. "Push to change it. But don't break it."