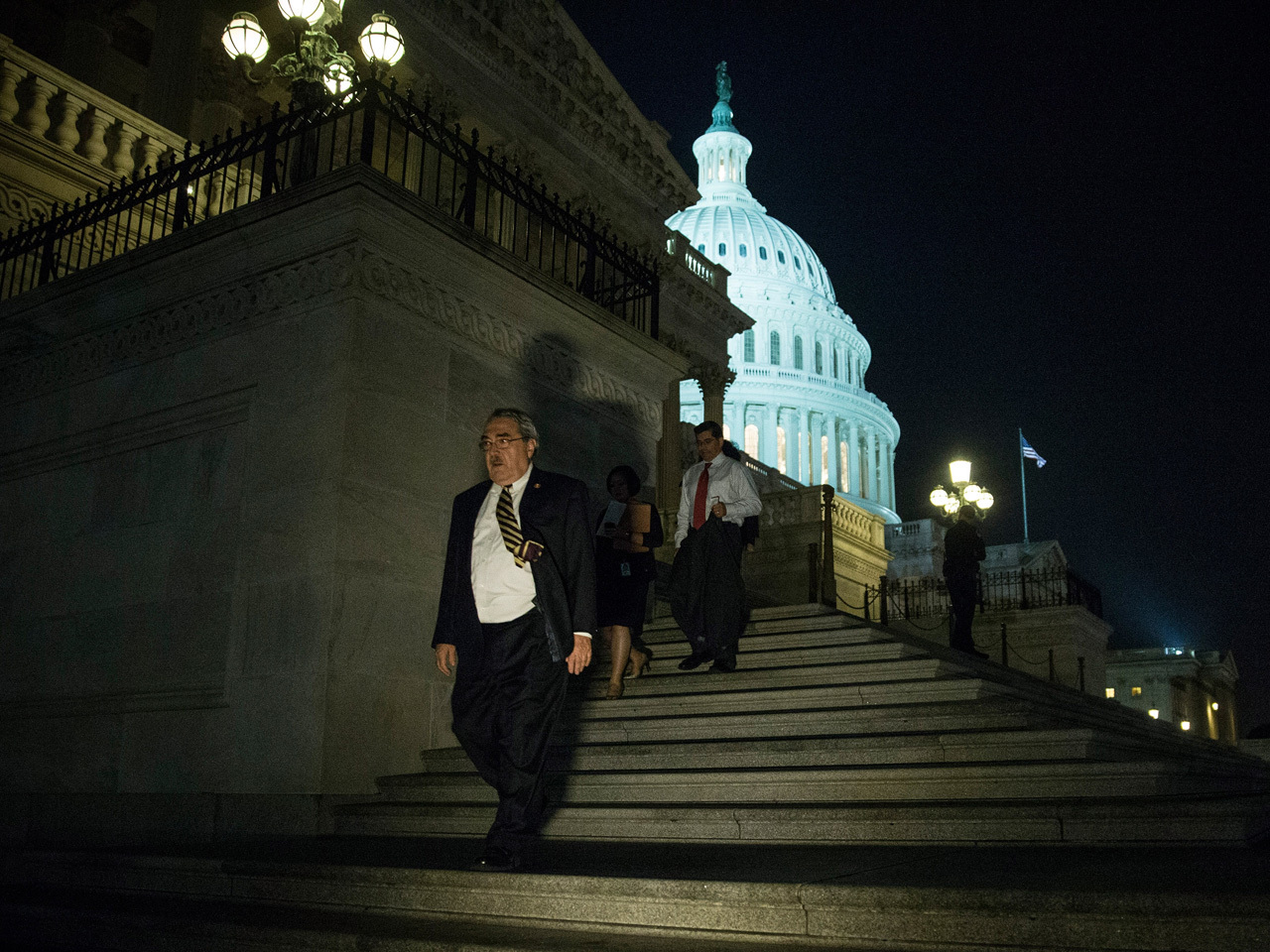 After 15 days of a government shutdown and on the eve of when the country was set to lose its borrowing authority, Congress passed legislation tofund the government and avert a default Wednesday night.  President Obama later signed the bill, officially reopening the government and allowing federal employees to head back to work.

By a vote of 81 to 18 in the Senate and 285 to 144 in the House, the agreement, negotiated bySenate Majority Leader Harry Reid, D-Nev., and Minority Leader Mitch McConnell, R-Ky, was approved. It will fund the government through Jan. 15 and lift the debt ceiling through Feb. 7.  The bill will also pay furloughed government workers for the time they missed during the shutdown.

"This compromise we reached will provide our economy with the stability it desperately needs," Reid said on the floor earlier Wednesday when he announced an agreement had been reached. "It's never easy for two sides to reach consensus. It's really hard, sometimes harder than others. This time was really hard."

White House Office of Management and Budget director Sylvia Mathews Burwell confirmed that President Obama had signed the bill in a statement issued at about 12:45 a.m., adding that the OMB would "work closely with Departments and Agencies to make the transition back to full operating status as smooth as possible."

Speaking from the White House press briefing room after the Senate vote, President Obama said the government would begin reopening immediately after he signed the bill, meaning a long-awaited return to work for thousands of federal workers on Thursday morning.

"We can begin to lift this cloud of uncertainty from our businesses and from the American people," he said.

"One of the things that I said throughout this process is we've got to get out of the habit of governing by crisis," he continued. "And my hope and expectation is everybody has learned that there is no reason why we can't work on the issues at hand, why we can't disagree between the parties while still being agreeable, and make sure that we're not inflicting harm on the American people when we do have disagreements."

As he was leaving the room, he was asked if he thought that due to the temporary nature of the agreement that "isn't this going to happen all over again in a few months?"

The president also said he would detail his long-term budget vision on Thursday; he's scheduled to deliver remarks at 10:35 a.m. at the White House.

Treasury Secretary Jack Lew said in a statement following the Senate vote that the U.S. is in the clear fiscally for the time being.

"Because of today's efforts, we will continue to honor all of our commitments - a core American value - and preserve the full faith and credit of the United States," Lew said.

Several of the Senate's most conservative members voted against the bill because they felt it did not do anything to dismantle the Affordable Care Act.

"This is a terrible deal," said Sen. Ted Cruz, R-Texas, on the Senate floor before the vote, though he acknowledged that it would pass. "This deal embodies everything about the Washington establishment that frustrates the American people."

In addition to funding the government and lifting the debt ceiling, the agreement authorizes retroactive pay for federal employees who were furloughed and instructs the government to reimburse states for the costs they incurred executing federal programs during the shutdown.

The House passed the measure later Wednesday evening after Republicans spent Tuesday struggling - and failing - to put together their own deal that could pass the entire conference. It took a combination of Republicans (87) and Democrats (198) to garner the necessary votes.

"Blocking the bipartisan agreement reached today by the members of the Senate will not be a tactic for us. In addition to the risk of default, doing so would open the door for the Democratic majority in Washington to raise taxes again on the American people and undo the spending caps in the 2011 Budget Control Act without replacing them with better spending cuts," House Speaker John Boehner, R-Ohio, said in statement Wednesday afternoon. "Our drive to stop the train wreck that is the president's health care law will continue. We will rely on aggressive oversight that highlights the law's massive flaws and smart, targeted strikes that split the legislative coalition the president has relied upon to force his health care law on the American people."

When the deal was announced earlier in the day, McConnell similarly promised that Republicans "remain determined to repeal" Obamacare and would fight to ensure none of the mandatory spending cuts mandated by the sequester were overturned.

As part of the deal, Congress will name negotiators to a group, led by Budget Committee chairmen Sen. Patty Murray, D-Wash., and Rep. Paul Ryan, R-Wis., that is charged with crafting a larger, long-term budget deal due in December.  Murray and Ryan will get together with Sen. Jeff Sessions, R-Ala., the top Republican on the Senate Budget Committee, and Rep. Chris Van Hollen, the top Democrat on the House Budget Committee, Thursday to begin deficit reduction discussions.

Though House Republicans have almost nothing in the bill that they can call a political victory, they have not taken out their frustration on Boehner.

"I think Speaker Boehner has done a fantastic job the last two and a half weeks. I think he has listened to his conference," said Rep. Raul Labrador, R-Idaho, at a gathering of conservatives Wednesday morning. "I am more disappointed in some of the Republicans that have been wanting to cave from the beginning. Instead of giving the Speaker the ability to fight, they have been just continually going to the media and complaining about the fact that we are in a fight."

Several conservative groups urged lawmakers to vote against the bill. "The proposed deal will do nothing to stop Obamacare's massive new entitlements from taking root -- radically changing the nature of American health care," said one such group, Heritage Action.

Mr. Obama said Wednesday night that it's now time for Washington to move on to other issues like the budget, as well as immigration reform and passing a farm bill.

"There's a lot of work ahead of us, including the need to earn back the trust of the American people that's been lost over the last few weeks," he said. "We can begin to do that by addressing the real issues that they care about."

He added, "My hope and expectation is that everybody has learned there's no reason why we can't work on the issues at hand, why we can't disagree between the parties while still being agreeable and make sure we're not inflicting harm on the American people when we do have disagreements."