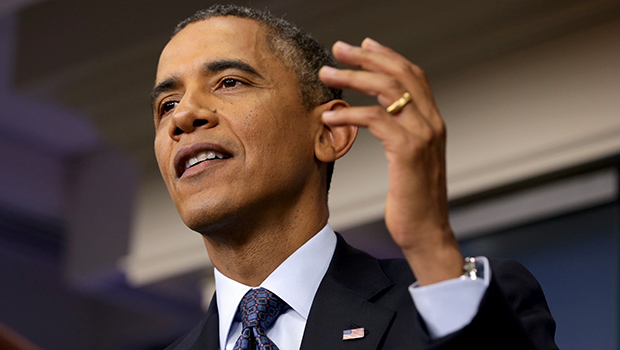 President Obama said he wouldn't negotiate with Republicans over raising the debt limit and funding the government, and he never really needed to pick up the phone. The deal that passed both houses of Congress Wednesday achieves both goals, with minuscule concessions from the president's side. In the crude analogy of two cars playing chicken, the president's opponents pulled over. After 16 days of a government shutdown, the Republican Party has achieved its lowest approval ratings in recorded history, the president's health care plan is unscathed, and the GOP's civil war still roars. Proof was on the cable television split-screens. As Republican Senate Minority Leader Mitch McConnell was announcing the bipartisan deal that ended the standoff, Sen. Ted Cruz was holding his own press conference denouncing the Senate establishment that had caved.

It was possible to see the seeds of this outcome just before Obama's second term started. The president, no longer facing re-election, had written off negotiating with GOP leaders. He and his aides resolved that future budget negotiations would be founded on a hard line. If he was going to burnish his legacy, it was most likely to happen through confrontation, not conciliation. Following that vector, the president has prevailed in this round and defended his signature legislative achievement. Obama won office preaching a message of a new kind of bipartisanship, but his domestic legacy will be defined by his partisan victories: passage of the 2009 stimulus bill, the Affordable Care Act, and victory in the shutdown fight of 2013.

Two things could have upended Obama's second-term macho posture. He could have lost his nerve, as Democrats claimed he did during the debt limit negotiations of 2011. In this fall's dispute, he could have acceded to some Republican demands in order to lift the debt ceiling or fund the government because presidents are the ones who are blamed for a bad economy in the end. Presidents also always face a lot of public pressure to negotiate, even if the public doesn't blame him for starting the crisis. As Dan Balz reports in his book Collision 2012, Obama's campaign team learned in focus groups and polling that while voters might blame the GOP for the economic mess, they still wanted Obama to step in with a solution. It was this pressure that caused the president to move a few degrees off of his no-negotiations position--just enough to open the tiny crack that led to negotiations in Congress.

The other challenge to Obama's aggressive posture was the behavior of his Republican rivals. The president's no-negotiation position on raising the debt-limit was deeply unpopular. According to the CBS/New York Times poll taken a few weeks ago, less than 20 percent of the country supported the president's view. Had Republicans fought on that ground, Obama would have had a tougher time. Instead, Republicans bailed him out by choosing to fight on turf that was equally unpopular. Polls before the shutdown showed large majorities of the country opposed to tying the funding of government to the defunding of Obamacare. After the shutdown, the polls got even worse for Republicans. In the most recent Wall Street Journal poll, public support for Obamacare actually improved.

Of all the budget showdowns--the debt limit fight of 2011, the near shutdown of 2011, and fiscal cliff of early 2013--this one is likely to be remembered above all. But will the president's negotiating posture serve him well going forward? That's harder to predict. The president and his fellow Democrats benefited in this round largely because they were united. Republicans were not, and they will not be going into the next round of negotiations either. However, those future talks--which revolve around issues of entitlements and taxes--offer at least a policy opportunity for Republicans to move in lockstep. The argument involves core Republicans tenets and everyone knows what they want. Despite the current infighting within their ranks, there is a strong desire for unity among Republicans. The question will be what posture the president takes when the next round of negotiations break down in December, as they inevitably will. If Obama opts for a hard-line stance again, will it be as successful the second time? His average approval rating is only 43 percent, and 51 percent of the country disapproves of his performance. Won't the public be less likely to support the president if the Republicans are unified and offering a more popular position over tax-and-spend issues?

Of course, it is not a given that Republicans will be unified. Sen. Cruz and his supporters in the House are not leaving this fight feeling vanquished. Cruz was pointing fingers the minute the deal was announced. "Unfortunately the Senate chose not to follow the House, and in particular we saw real divisions among Senate Republicans that was unfortunate. I would point out that had Senate Republicans united and supported House Republicans the outcome of this I believe would have been very, very different"

In defeat, Cruz sounds insane to his detractors--and his claim that the country was rallying to his position are refuted by all reputable metrics. But Cruz can still take comfort from the president's victory. Like Cruz, Obama stood firm to a principle in defending his health care plan despite public disapproval. Of course, Cruz's gambit was far more unpopular--among both his colleagues and the general public--but that is unlikely to sway the junior Texas senator because triumphant leadership can often appear to be on the verge of certain doom moments before it succeeds. The best proof of this also comes from Obama's leadership playbook: See Syria gambit.

Before Cruz defined what it meant to blunder ahead without a plan, President Obama's was refining that approach with his Syria policy. In that case, the president's highly unpopular threat of military strikes, headed for a big defeat in Congress, was averted at the 11th hour by a surprise Russian intervention that led the Syrians to promise disarmament. The president didn't see that coming, but he kept pressing nonetheless. Following that lucky logic, it's possible to envision a scenario where Cruz's long-shot effort to delay Obamacare could have been given a boost when the rollout of healthcare.gov was so bad it seemed to ratify every Republican doubt over Obamacare not being ready for prime time.

It didn't matter that Cruz's campaign was so clearly doomed you could tell from outer space. For men of ambition and deeply held views, there is little to distinguish between success and total failure when you are in the thick of the fight, guided only by the righteousness of your cause. "You know, I don't think anytime you are in the middle of a fight your approval rating is going to be that high," said Rep. Raul Labrador, a leader of the Tea Party fight in the House. "So for anybody to make a decision based on what your approval rating is at your lowest point, means that your decision--you don't really understand the political dynamics in the United States." Cruz and his allies are likely to be just as animated for the next engagement and the president, fresh off of this success, will have little reason to change course. The next round isn't going to be pretty either.