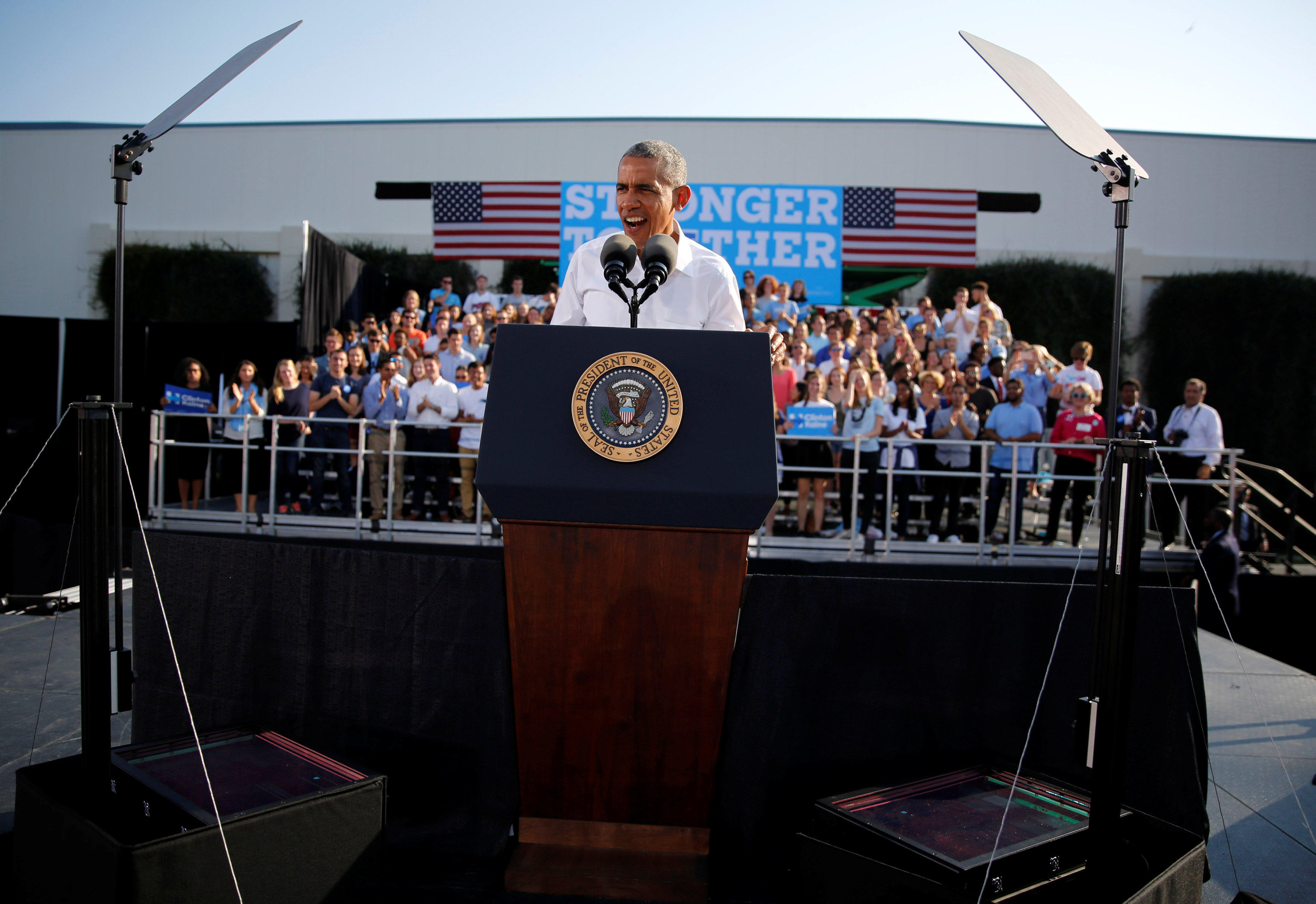 CHAPEL HILL, N.C. -- President Barack Obama twice generated a historic wave of African-American support on his way to the White House, but worries now the black vote “is not as solid as it needs to be” for Hillary Clinton.

Obama’s and Clinton’s travel schedules are taking them to swing-state metro areas with significant black populations, and the two officials are fixtures in black-audience media. Their message is consistent: Clinton will fight for the black community, while Republican Donald Trump would turn back the clock for voters that helped propel Obama to comfortable national victories.

“I need everybody to understand that everything we’ve done is dependent on me being able to pass the baton to somebody who believes in the same things I believe in,” Obama told nationally syndicated radio host Tom Joyner in an interview broadcast Wednesday.

Obama said early voting is up among Hispanics, but not among black voters. The president warned that Trump would obliterate his record, even digging up first lady Michelle Obama’s White House vegetable garden. “You think I’m joking?” Obama asked.

Hours later, he reminded an enthusiastic audience in Chapel Hill, North Carolina, that Republicans in the state tried to make it harder to vote with sweeping election law changes, only to have a federal court strike down the law because it “targeted black voters with surgical precision.”

So “it’s easier to vote than ever” in North Carolina, Obama said. “What’s our excuse?”

An Associated Press analysis of early voting data in North Carolina shows blacks have cast 111,000 fewer ballots than at this point four years ago, when Obama lost the state by about 92,000 votes. Clinton aides note that GOP officials there reduced early voting sites for the initial week of early voting, and they say they can make up the difference by Election Day now that more sites are opening.

Black voters’ share of early ballots request is also down a few percentage points in Florida and Ohio, though the Clinton campaign points to strong early turnout in key urban counties with large numbers of blacks and Hispanics.

To be clear, Clinton will win the black vote by overwhelming margins, just as Obama and a generation of Democratic presidential nominees before him. On her way to her party’s nomination, Clinton won more than 3 out of 4 black voters. And even with an apparent tightening of the general election in the final weeks, Clinton still has many more paths to the required Electoral College majority of 270 votes than does Trump.

Yet, problems could arise for Clinton if Trump draws a surge of white support. That would make her African-American margins and the overall black turnout especially critical in Florida, Michigan, North Carolina, Ohio and Pennsylvania. Then, it could matter whether black voters make up 15 percent of the Ohio electorate, as they did in 2012, or something closer to 9 percent, as they did in 2004, when Republican President George W. Bush won the state and a second term. Nationally, black voters cast about 13 percent of presidential ballots for Obama’s two victories, up from the 11 percent benchmark in previous decades.

Democrats are trying to leave nothing to chance.

Obama’s appearance in North Carolina followed an appearance Tuesday in Ohio. He has two Florida rallies Thursday, in Jacksonville and Miami, and he plans to return to the state Sunday, visiting Orlando on the final day of early voting in the state. Vice President Joe Biden met earlier this week with black leaders in Philadelphia, and Michelle Obama has taken a prominent role in the campaign.

Clinton, meanwhile, warmly embraces Obama’s sentiments. “I want to build on the legacy that President Obama has given us,” she told radio host LeRoy Jones, another nationally syndicated black media personality, earlier this week.

Her campaign is broadcasting an ad on black-audience radio stations hailing the former secretary of state as “fighting for us,” in contrast to Trump “demeaning our community.” A female voice in the ad says, “Listen to how he talks about us.” One audio clip has Trump singling out a black supporter at a rally in California: “Look at my African-American over here,” he said. In another, Trump lambasted Obama as “the most ignorant president in our history.”

As she travels to battleground states, Clinton has focused on nonwhite voters and encouraged early voting. Many of her events are near early voting sites.

She spent Sunday at a soul-food restaurant and a black church. On Tuesday, she traveled with Congressman John Lewis, a civil rights hero from Atlanta, who reminded Clinton supporters of the struggle to secure the right to vote.

“We must get out and vote like we’ve never voted before,” Lewis told a crowd of about 4,000 people in Fort Lauderdale, Florida. “Don’t let anyone keep you home.”