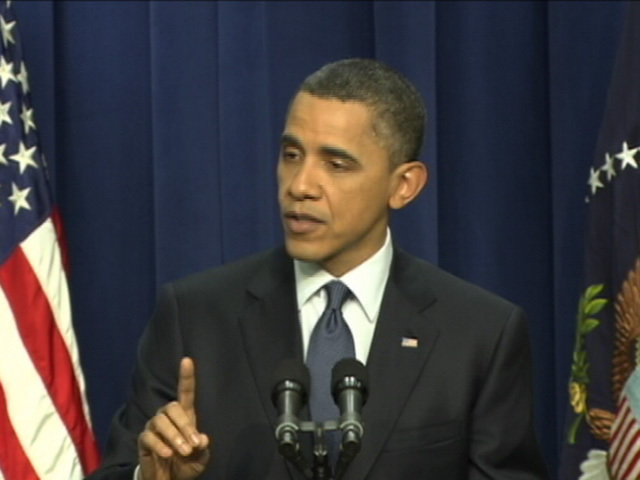 The United States and the international community "are slowly tightening the noose on Qaddafi," President Obama said in a news conference today.

Libyan leader Muammar Qaddafi is engaged in fierce fighting with rebel forces trying to oust the strongman, which grew out of a wave of unrest that has hit North Africa and the Middle East. However, large financial seizures, sanctions and an arms embargo have left Qaddafi "more and more isolated internationally," the president said.

"It is in the United States' interest and the interest of people in Libya that Qaddafi leave," Mr. Obama said. "We're going to take a wide range of actions to try to bring about that outcome... And as I've said before, when it comes to U.S. military actions, whether it's a no-fly zone or other options, you've got to balance costs versus benefits. And, you know, I don't take those decisions lightly."

While Qaddafi is becoming more isolated, he is digging in, taking back territory from the rebel forces in Ras Lanuf and other areas with superior military force. "The plan is to squash the rebels with no mercy," his son Saif Qaddafi told CBS News.

When asked by CBS News White House correspondent Chip Reid whether the U.S. had a moral obligation to intervene in Libya, Mr. Obama said, "I continue to believe that not only the United States but the international community has an obligation to do what it can to prevent a repeat of something like what occurred in the Balkans in the '90s; what occurred in Rwanda."

One option is 24-hour surveillance, which would provide an alert system to detect if civilian massacres by Qaddafi forces, the president said.

"Obviously, we're going to have to look at what develops on the ground on a case-by-case basis," he said. "It's going to require some judgment calls, and those are difficult ones."

NATO will be meeting on Tuesday to consider a no-fly zone, Mr. Obama said, and the U.S. has been in discussions with both Arab and African countries to gauge their support for such an action. Secretary of State Hillary Clinton plans to meet with Libyan opposition leaders in the next several days.

"The bottom line is is that I have not taken any options off the table at this point," Mr. Obama said. "I think it is important to understand that we have moved about as swiftly as an international coalition has ever moved to impose sanctions on Gadhafi."

However, the president added, "any time I send United States forces into a potentially hostile situation there are risks involved and there are consequences. And it is my job as president to make sure that we have considered all those risks."

It's also important to maintain a strong international coalition, he said.

When asked whether he was concerned Qaddafi may the firepower to defeat the rebels, Mr. Obama responded, "I am concerned, absolutely."

Qaddafi has troops that remain loyal to him, and he still has assets -- in spite of financial freezes imposed against him -- he's used to hire mercenaries.

"And I think that's why it's so important for us not to stop where we are, but to continue to find options that will add additional pressure, including sending a clear message to those around Qaddafi that the world is watching," Mr. Obama said.

There have been referrals to the International Criminal Court, he said.

"He wasn't stating policy, so let me be clear, again, about what our policy, as determined by me, the president of the United States, is toward the situation there," Mr. Obama continued. "I believe that Qaddafi is on the wrong side of history. I believe that the Libyan people are anxious for freedom and the removal of somebody who has suppressed them for decades now. And we are going to be in contact with the opposition, as well as in consultation with the international community, to try to achieve the goal of Mr. Qaddafi being removed from power."