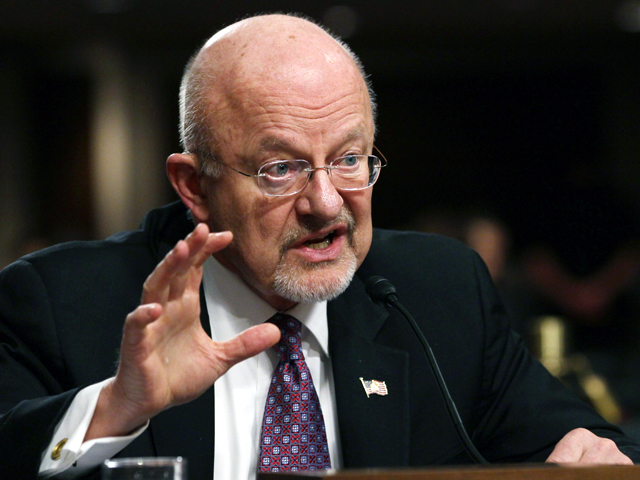 Updated at 5:40 p.m. ET with comments from Sens. John McCain and Joe Lieberman.

"The situation in Libya remains tenuous and the Director's comments today on Gaddafi's 'staying power' are not helpful to our national security interests," Graham said in a statement. "His comments will make the situation more difficult for those opposing Gaddafi. It also undercuts our national efforts to bring about the desired result of Libya moving from dictator to democracy."

Graham said "this isn't the first questionable comment" from Clapper. In addition to his remarks regarding Qaddafi, senators in the Senate Armed Services Committee Thursday were surprised by Clapper's response when asked which nations pose the greatest "mortal threat" to the United States.

"Certainly, the Russians still have a very formal nuclear arsenal...which does pose, you know, potentially a mortal threat to us," Clapper said. "I don't think they have the intent to do that. Certainly China is growing in its military capabilities. It has a full array of what are conventional or strategic forces that they are building. So they, too, pose potentially from a capabilities standpoint a threat to us. As a mortal threat."

Clapper immediately clarified, however, that he does not believe Russia and China are the greatest threats the United States overall.

"My greatest concern, though, does not lie with a nation state posing a threat to us as much as it is in the area of terrorism," he said.

"You didn't mention Iran or North Korea, which would have been the first two countries I would have thought of in response to that question," he said.

Clapper responded that Iran and North Korea are of great concern but do not have the capability to pose the same threat as China or Russia.

Carney said Graham's assertion "is based on a real misinterpretation of what Director Clapper said today."

With respect to Clapper's comments regarding Qaddafi, Graham said, "Some of his analysis could prove to be accurate, but it should not have been made in such a public forum. If he felt the need to say what he did, then they should have moved into closed session."

He added that these comments should be the "final straw" for Clapper.

UPDATE: Sens. John McCain (R-Ariz.) and Joe Lieberman (I-Conn.) today said in a press conference that they stand by Clapper.

"I believe that Gen. Clapper is doing a very fine job. I believe his honesty and straight forward opinion is something we in the Senate value," McCain said. "This is just one of those cases on a rare occasion where Sen. Graham and I are in disagreement, but I want to say I have very high regard for Gen. Clapper, and I appreciate the very difficult work he and the people under him do."

Lieberman said he agreed with McCain. "Gen. Clapper has given 47 years to our country, he's a first rate intelligence officer, he's done an excellent job as DNI," he said. "No, I don't think he should resign."

Lieberman added that Clapper gave a "very important answer" to the question of how the unrest in Libya could play out.

"To me, the fact is the president has said Qaddafi must go, we agree Qaddafi must go," he said. "If the head of our intelligence community says left alone Qaddafi will not only not go, but will defeat the opponents, it seems to me to make it even more urgent that we do something, not military intervention on the ground, but do something significant to help those who are trying to get rid of Qaddafi."

Russia says it won't start a war in Ukraine, but it won't "be ignored"
Stephanie Condon