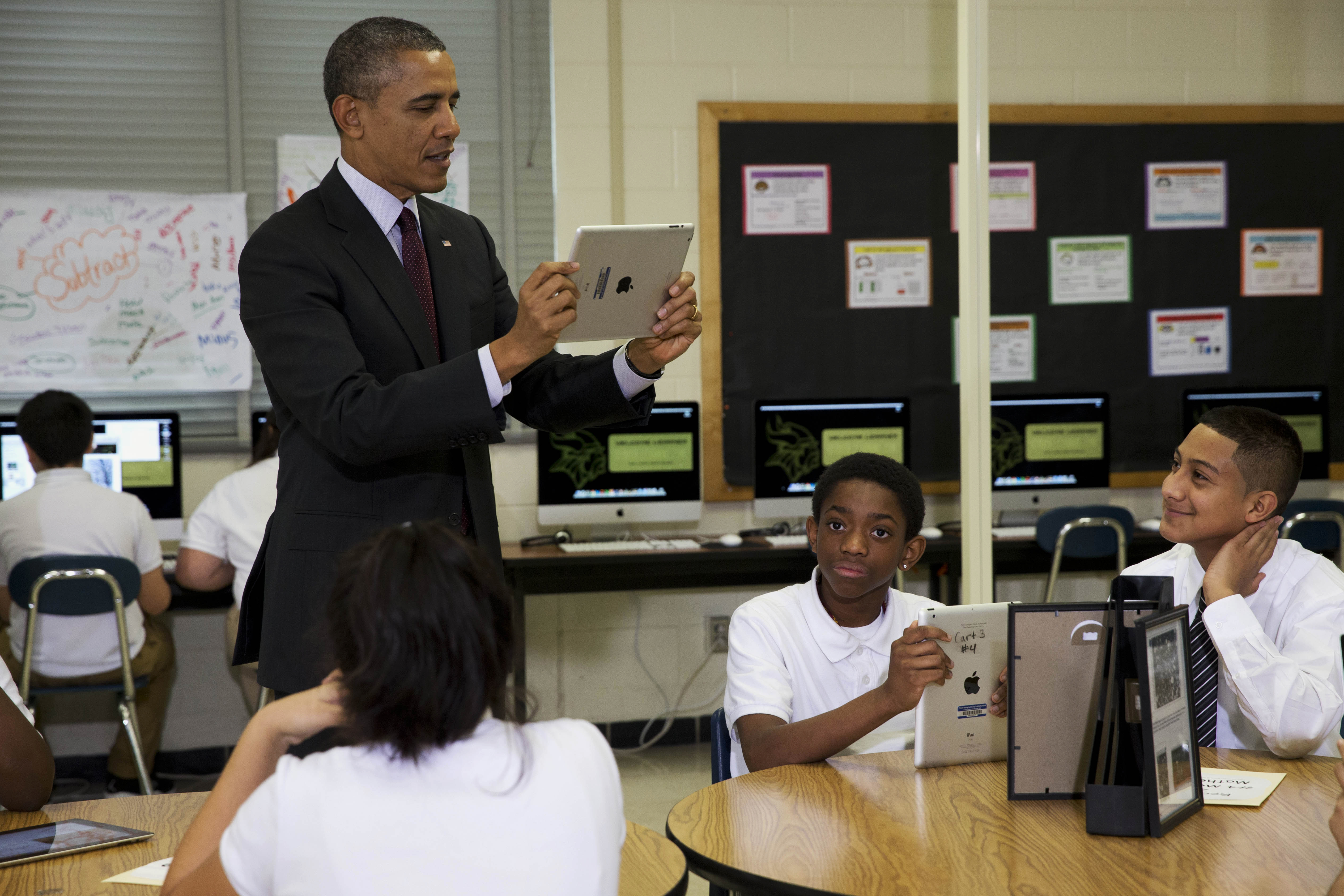 President Obama hailed the Federal Communications Commission (FCC) and private companies for committing money and technology to help meet his goal of expanding high-speed broadband access to 99 percent of American students in the next five years.

The initiative, called ConnectED, is just one of a handful of proposals the president outlined in his 2014 State of the Union address that he can pursue with or without the help of Congress.  He is already claiming a measure of success, since the FCC announced plans to double the amount of money dedicated for broadband grants – from $1 billion to $2 billion, which will help connect more than 15,000 schools and 20 million students in the next two years. The agency is using leftover funds from previous years and shifting money away from services like dial-up internet that are rapidly becoming obsolete in order to avoid seeking new funding, according to the Washington Post.

In his speech Tuesday at Buck Lodge Middle School in Adelphi, Md., the president said that better access to high-speed broadband will not only improve the teaching and learning experience, but will help America from falling further behind some of its foreign counterparts on education.

“Only around 30 percent of our students have true high-speed internet in the classroom. In countries like South Korea, that’s 100 percent, and we shouldn’t give that kind of competitive advantage over to other countries,” he said.

“In a country where we expect free WiFi with our coffee, we should definitely demand it in our schools,” he added.

During the event, the president announced that Apple, AT&T, Autodesk, Microsoft, O’Reilly Media, Sprint and Verizon have made combined commitments of about $750 million to provide products and services to schools like iPads, online education tools, discounted versions of the Windows operating system and free wireless service for low-income students in the coming years that will supplement schools’ newfound broadband capabilities.

“Right now fewer than 30 percent of schools have the broadband they need to teach using today’s technology which creates real problems for learning,” White House Domestic Policy Council Director Cecelia Muñoz said Monday before the president’s speech. She argued that these investments will offer “the potential to revolutionize how teaching and learning happen in the classroom” with technology helping teachers give more individualized attention to students and their pace of learning, among other things.

The president was careful to note that teachers will be key in translating the wireless access into educational gains for their students.”Technology is not a silver bullet. Its only as good as the teachers who are there using it as one more tool to help inspire and teach and work through problems,” he said. “Imagine what it means for educators to spend less time grading tests and papers, and more time helping young people learn.”

The FCC initiative and the private sector investments will speed up progress on the ConnectED program, which was initially announced last June. “That is breakthrough progress, the fact that…the FCC is taking efforts to accelerate this initiative without having to increase the deficit by a penny or even ask in this down payment for additional resources,” Gene Sperling, director of the National Economic Council, said Monday.

The president is leaning heavily on private-sector investment to see many of his education initiatives come to fruition such as increasing college access and graduation rates for low-income students and making higher education more affordable for all families. Other goals, such as increasing the availability of high-quality preschool across the country, will require cooperation and investments from Congress. With Republicans still searching for ways to cut spending, further spending is unlikely.